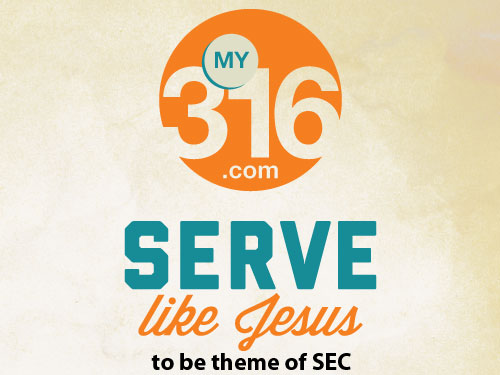 With the theme “Serve Like Jesus,” the State Evangelism Conference will kick off a statewide, year-long emphasis on serving Oklahoma geared to taking Jesus outside the walls of the church.

The fourth year that MY316 has been the emphasis of SEC, the designated Scripture, Mark 10:45, highlights that there is not a choice between evangelism and service, but a combination of the two to spread the Gospel.

Evans, who has been pastor of Oak Cliff Bible Fellowship in Dallas for 35 years, is also president of The Urban Alternative, a national ministry that seeks to bring about spiritual renewal in America through the church.

While his church has grown from 10 people in 1976 to more than 9,000, his daily radio broadcast, “The Alternative,” is heard on more than 500 stations throughout the United States and in more than 40 other countries. He is the author of more than 40 books, including Oneness Embraced, The Kingdom Agenda, Marriage Matters and The Battle is the Lord’s.

Stroope is pastor of Lake Pointe Church in Rockwall, Texas, which has grown to a congregation of more than 11,000. He provides coaching to partnership churches and pioneer missionaries in Africa, Australia, New Zealand, China, Cuba, Russia, Mexico, France, South Africa and North America. He has coauthored two books, Money Matters in the Church and It Starts at Home. His newest book, Tribal Church, was released in early 2012.

Collins has been pastor of Indian Springs Church in Kingsport, Tenn. since 2005. In addition to more than 20 years of pastoral experience, in 2000, Collins earned a Ph.D. in preaching from New Orleans Seminary. He is a sought-after revival and conference speaker because of his heart for the local church and his passion to make disciples of all nations.

The featured musician will be Lauren Chandler, singer/songwriter from Dallas.

New this year will be a registration process. All conference participants will be required to register, either online or by mail. If registering by mail, send name, church name, address, phone and email for each attendee to Erin Clark at 3800 N. May Ave., Oklahoma City 73112, no later than Wed., Jan. 16, 2013. Register online at BGCO.org.

Other events surrounding the Evangelism Conference will be a pre-conference “Call to Prayer, Return to Me,” led by Greg Frizzell, BGCO prayer and spiritual awakening specialist, Sun., Jan. 27, from 5:30-7 p.m., and the Oklahoma Conference of Southern Baptist Evangelists on Mon., Jan. 28, from 9-11:45 a.m.

Tuesday’s sessions include a women’s luncheon with Chandler, and a young adults’ luncheon with Newton. Reservations are required for both.

The conference begins with the evangelists’ session Monday morning, and concludes Tuesday night.