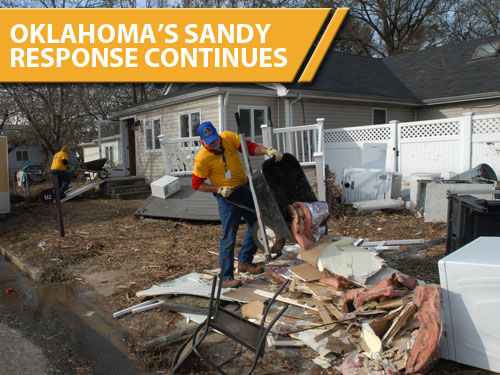 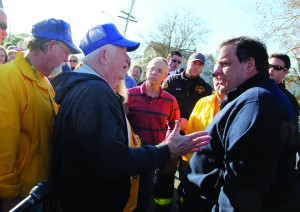 Governor Chris Christie thanks Dan Fuller and Dave Karr from Southern Baptist Disaster Relief who drove up from Oklahoma to volunteer their time at a Relief Center at the Port Monmouth Fire Department in Port Monmouth, N.J. on Monday, Nov. 5, 2012. (Governor's Office/Tim Larsen)

Middletown has become one of the hubs of SBDR ministry where volunteers, primarily from Oklahoma thus far, are being hosted by New Monmouth Church and Pastor Mike Miller.

“This is an unusual operation,” said Dave Karr of Norman, on-site coordinator for the Middletown response. “Things have not progressed the way they normally do in a disaster setting. Local people are finding their way to shelters, and the church members here are finding out what they need and meeting those needs.”

Karr, a six-year DR veteran, is accompanied by some 90 Oklahoma SBDR volunteers to operate a three-station kitchen capable of preparing 35,000 meals a day, a shower unit, a laundry unit, three chain saw units and a mud-out unit. Karr, a member of Norman, Bethel, said nothing has been typical about this response.

Karr and his team received word Monday that Gov. Christie would be visiting a nearby firehouse. “We decided we’d take a look,” Karr said.

“We were standing in the back when one of his aides gathered us up and moved us to the front of the crowd,” Karr recounted. “Gov. Christie said, ‘Ah,

my friends with disaster relief.’ He thanked us for our service. I told him that we are here to serve and what our kitchens were capable of preparing. I told him we were ready to help in any way we can.”

At Middletown, while the Oklahoma DR team is being housed at New Monmouth Church, the actual kitchens and units are set up in the parking lot of Saint Mary’s Catholic Church across the street. “I think it is great that it shows we can work together to help people in need,” Karr said.

“Pastor Miller at New Monmouth has been great. He told us the church is ours; use it however we need it. He did say he’d like to use it for a little while on Sundays,” Karr joked.

By Karr’s estimate, New Monmouth will be a center of SBDR activity for the foreseeable future. With the ramp-up to recovery in full swing, he expects volunteers will remain engaged in ministry for a long time.