Missions around the world: A Messenger exclusive interview with IMB President Tom Elliff 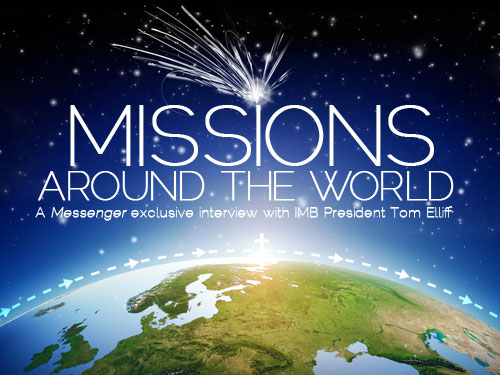 The Baptist Messenger recently sat down with author, pastor and president of the International Mission Board, Tom Elliff, about life, missions and the advance of the Gospel.

Baptist Messenger: What has blessed your heart, things you’ve seen God doing through the IMB the last year and a half?

Elliff: The Lord called us to the IMB after our second retirement. We retired, then went to be IMB senior vice president, and retired for another couple of years after three-and-a-half years in that role. When the IMB said, “This is what we sense is God’s will,” it put Jeannie and me on our faces before the Lord. We knew if God wanted us to do it, He would give us the call, a vision and energy to do it. It has been exciting to see so many things take place this year. God is at work around the world, and we are seeing thousands of people come to Christ in the hardest areas.

Baptist Messenger: As you look around the globe, are there some areas you could talk about or a story that has blessed your heart or a good work to give God glory?

Elliff: I heard from a worker in the Horn of Africa in a strongly Muslim area where our people have worked faithfully, with the question, “I have 1,000 people to baptize this Sunday. How do we handle this?” I received an email from another of our personnel who also works in a strong Islamic area, and he said, “I kept asking the men I was training, are you really taking this message to other people? They took me to a meadow, and hundreds of people came streaming out—second, third, fourth and fifth generations of believers these men and the folks who work with them had shared with, followed up on, baptized and were now meeting together regularly. Some incredibly exciting works are going on all over the world. Even in the darkest places, we find someone who is faithfully sharing the Word, and that brings us great delight.

Baptist Messenger: You mentioned hard places. Could you spin the globe and point to one place where the soil seems especially hard?

Elliff: When you spin the globe, you think it would it be an Asian country. But in Asia, millions of people are trusting Christ, and many of our personnel are involved in training them, discipling them, helping them plant reproducing churches. There are some hard places in Africa, but God is at work there, too. One place that is a great burden on my heart is Japan. We had an opportunity to go into Japan following World War II and flood that country with missionaries. We didn’t, and Japan became one of the most secularized nations in the world. Out of 28 million people, less than one percent are evangelicals. Following the tsunami, and Southern Baptist response, and IMB long-term presence there, people in Japan are beginning to come to Christ. The earthquakes continue off the coast of Japan, and for the first time in a long time, their lives are filled with such uncertainty that their hearts are opening to Christ. I pray that once again there would be people to answer the call of God and go to a nation like Japan.

Baptist Messenger: How can Oklahomans pray for you, your leadership, your people and the cause of the Kingdom of God?

Elliff: The IMB has opened up the doors to the Great Commission table to all Southern Baptists. The IMB is the only mission agency fully supporting its missionaries because of giving to the Cooperative Program and Lottie Moon. We have almost 5,000 missionaries on the field. We work closely with other mission boards, but these 5,000 missionaries can give full attention to their work, because they’re totally supported by Southern Baptists. The 5,000 is less than three one-hundredths of one percent of the Southern Baptist population in the U.S. There are 330 million people in the U.S, and 6.7 billion people in the rest of the world. It would take 37 years to count to one billion at a number a second. And they’re being born. It took us until 1804 to reach our first billion, and now we’re adding a billion about every 12 years. But they’re not just being born, they’re also dying. That’s why Jesus said the fields are white to harvest. A city of 178,000 people disappears off this globe every 24 hours. Almost 2 million every two weeks just disappears. And less than half the world has any exposure to the Gospel—1.27 billion are likely to die without ever even hearing the name of Jesus. So when you think of our Lord’s command, and our responsibility, and know that less than three one-hundredths of one percent from our Southern Baptist population are overseas, there’s something wrong. I pray Southern Baptists would support a great wave of missionaries and missions overseas. Giving through the Cooperative Program is an incredibly effective way of doing that, because we can’t send folks we cannot support. I pray that not only will God call more people to the field, but that we’ll also be able to support them. We’ve appointed all we can support, with 861 personnel who qualify for missions that we are unable to send. We are within 3,162 unengaged, unreached people groups of seeing the message of Jesus in every people group in the world, and so we need everybody on hand.

Baptist Messenger: You paint a dramatic picture. The stakes are so high, and these lives are so dear to the Lord and to us as well. With Christmas coming, our minds turn to the Cooperative Program but also to  the Lottie Moon Christmas offering. Are there some prayer goals listed on the website?

Elliff: Absolutely. Go to IMB.org for information about our Lottie Moon offering for world missions—how it is used, how important it is, because that offering goes 100 percent to field ministries. Last year, we had the fourth-highest Lottie Moon offering in history. But our Cooperative Program diminished more than the gains we had in Lottie Moon. So, at the end of the year, we were able to send fewer, rather than more, missionaries. My prayer is that people will give generously to Lottie Moon and through their church on a regular basis through the Cooperative Program.

Baptist Messenger: Do you have a feeling of optimism or caution about the days ahead for Baptists and the Kingdom of God?

Elliff: If Southern Baptists do not step up to the plate, it’s possible we might as well put on a nightgown and cap, light a candle and shuffle down a hallway of obscurity. God is making opportunities so abundantly available to us. I’m old enough to be their granddad, but God has given me the ear of university students, and the last month, I’ve spoken to almost 26,000 college students who are ready to go. God knows precisely when Christ is coming. We know that when He comes, there will be around His throne a multitude of every language, people, tribe and nation who will know Him and worship Him. That’s why we look at these 3,162 unengaged people groups around the world, who have nobody among them sharing the Gospel, discipling people and planting reproducing churches. We’ve asked churches to join us through Embrace, businesses and professionals to join us through Global Strategic Mobilization and former IMB personnel through our ready reserve. We are training as fast as we can missionaries from other nations. We have 169 years of experience, so we’re sharing our methodology. We’re doing everything we can to see that people get to the field, but we can only send those we can support. I am optimistic that Southern Baptists will step up to the plate, pray for us and give generously.

Baptist Messenger: So glad to spend this time with you. Oklahoma, again, sends its love and prayers and salutes you and all your people. It’s one big family striving to work the fields white unto harvest.