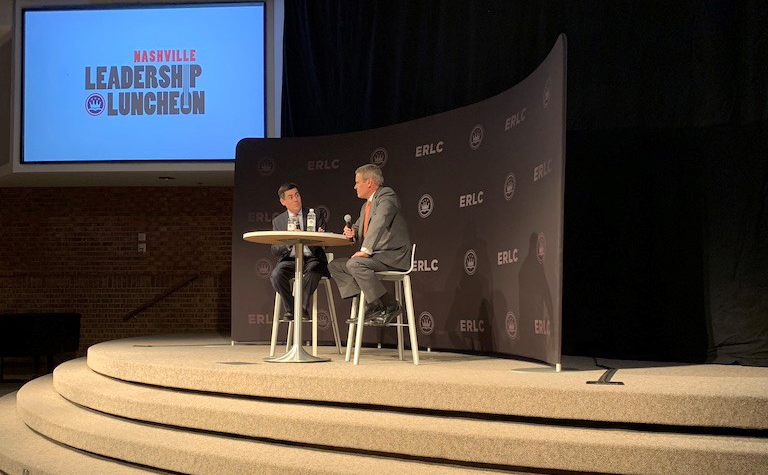 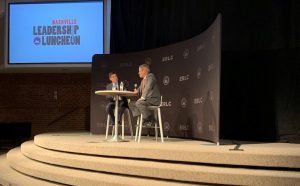 Bill Lee’s, right, decision to run for governor of Tennessee and his work in that office cannot be explained without understanding the impact of his faith, he told ERLC President Russell Moore, left, in the Dec. 3 interview.
Photo by Daniel Patterson

NASHVILLE (BP)—Bill Lee’s decision to run for governor of Tennessee and his work in that office cannot be explained without understanding the impact of his faith, the state’s highest office-holder told Christian leaders Dec. 3 at a Southern Baptist-sponsored event in Nashville.

“(T)he way that faith plays out most in my life is that I believe that we are called to serve people,” said Lee, who was elected governor in 2018. “The Lord calls us to serve the poor, to love our neighbors as ourselves, to use our lives to impact other people’s lives for good.

“(T)he whole reason that I ran for governor is to serve people.”

The faith-motivated service he offered as a private citizen has been reflected in his initiatives since taking office, Lee told Russell Moore, president of the Ethics & Religious Liberty Commission (ERLC). Moore interviewed Lee before an audience of pastors, leaders and other Christians from Middle Tennessee during the latest ERLC Leadership Luncheon at the SBC Building.

He mentored men coming out of prison, and that is why his administration will have a policy on criminal justice reform that includes such elements as re-entry and sentencing changes, Lee said. His mentorship of an at-risk young man in the inner city was the impetus for proposed legislation that would establish education savings accounts to help low-income students in the state’s underachieving school districts, the governor said.

Lee grew up in a godly family and attended church all of his life, but he became a Christian as a 19-year-old in college, he told Moore. “My life didn’t change much externally,” he said, but it “started a process of transformation for me.”

Carol Ann, his late wife, was more mature in her faith when they met and was “an inspiration to me” spiritually, Lee said. They walked through suffering together early in their 16-year marriage, with five pregnancies “that didn’t work out,” including the death of a child at birth, before four children were born, he said.

She died in a horseback riding accident in 2000.

“That was (a) life-altering, sort of cataclysmic event in my life that forever changed the whole trajectory of my life,” Lee told the audience.

For multiple years as a family, he said, “(I)t was a journey that included wonder and joy and happiness and a rich, full life, but it was interspersed with a lot of pain and tragedy and questions. But I will say, that never ends, I don’t think, for any of us. There’s different times in life when it’s more severe than others, when it ebbs and flows.

“It is the richness of a bittersweet journey. I’ve often said bittersweet is better than sweet. It has a more interesting flavor, and it’s a lot richer and deeper.”

Citing Jesus’ declaration in John 10:10 that He came that His followers would have life in abundance or in fullness, Lee said, “I used to think a full life meant that you would be happy and peaceful and joyful, but I’ve really realized that fullness is happiness in the midst of struggle and joy in the midst of pain and peace in the midst of turmoil and that in Him, because of that anchor, you can have that in the midst of whatever life brings.”

Lee and his wife Maria were married in 2008, and she is a spiritual inspiration to him, he said.

When he considered running for governor as a Republican after a successful business career, people asked if he were certain he wanted to enter politics because of its rough-and-tumble nature, Lee told Moore.

He would think, Lee recalled, “Look, I know what a bad day is, and that’s not going to be a bad day. A bad day on the campaign trail is not a bad day.

“I used to say, ‘When you’ve lost the most important thing on earth, then earth doesn’t have nearly the meaning to you that it used to have.’ And it doesn’t have the hold on you either. And it doesn’t have the attractiveness that it used to either, even though I love my life … and I love the years that I have to do the things I’m doing. The things that happen here are not nearly as meaningful temporally as they used to be. I think it makes it a lot easier to put things in perspective.”

Lee also has found that the approval of people has lost its grip on him.

“When you walk through the most difficult of circumstances, you pretty quickly figure out what matters and what doesn’t,” he said. “In a moment like that you (couldn’t) care less about what anyone thinks about you ever again.”

Moore recalled a 2018 meeting he attended in which Lee spoke favorably of other candidates running for governor.

“I think it’s important because I think that in this day of divisiveness our country needs leadership to lead in how it is that we treat one another,” Lee said.

Lee said criminal justice reform matters for many reasons. If it is done correctly, the crime rate will be lowered and ex-prisoners will become productive citizens.

“My sense is we incarcerate too many of the wrong people for the wrong reasons,” he told the audience. He believes there are ways for non-violent offenders to pay penalties in different ways and not fill jails or prisons and become violent offenders. “(T)hat allows them to be held responsible for their crime but to do it in ways that allow them to be rehabilitated and be productive.”

After the interview with Lee, the ERLC hosted a panel discussion on criminal justice reform.

When asked how the audience could pray for him, Lee asked for prayers for his family and for God’s favor on the state.

Audio of the interview is available at Moore’s “Signposts” podcast site, here.

The ERLC Leadership Luncheon is held three or four times a year for a discussion of ethical and cultural issues. Sometimes the format is a question-and-answer session with Moore. At other times, the lunch features interviews with special guests or presentations on relevant topics.