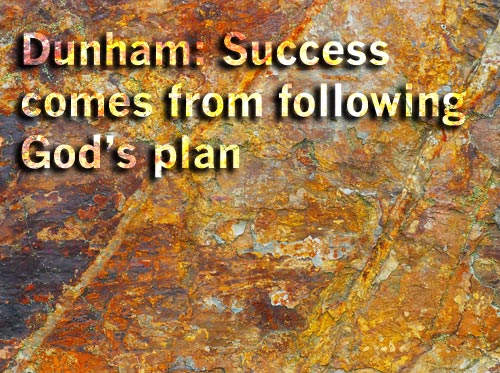 Archie W. Dunham, the new independent non-executive chairman of Chesapeake Energy in Oklahoma City, reads from the book of Proverbs every day.

“I read from Proverbs daily because I consider it the book of wisdom, and all CEOs and others with heavy responsibilities need wisdom daily,” said Dunham, who lives in Houston and retired as chairman of ConocoPhillips in 2004.

One of the most powerful energy moguls in the world, Dunham, a member of Houston, Second, has no qualms about sharing his Christian testimony, which has been published in several books, including God Is My CEO by Larry Julian and Les Csorba’s Trust.

Growing up in the Baptist faith in Ada, Dunham said he came to faith naturally through his family, but learned at about age 30, he could not rely on himself or others, but only on Jesus.

He said at one point he was frustrated with his career, but told God he would be happy wherever He put him.

“From that moment on, I was content,” he said.

“My wife, Linda, and I fell in love at Falls Creek,” he revealed. “We studied God’s Word at Falls Creek, and I made the commitment to read His Word daily at Falls Creek. Falls Creek is a jewel on Earth in God’s Kingdom. What else can you say?”

Campers entering the lobby in the tabernacle probably don’t realize they are walking through the “Linda and Archie Dunham” lobby, which serves as the Dunhams’ personal testament to a lifetime of love for each other, their commitment to their Lord and Savior and their desire to continuously impact the lives of young people.

“Because we want to impact the lives of young people, supporting Falls Creek was not a difficult decision,” Dunham acknowledged.

Dunham, who holds a degree in geological engineering and also an MBA from the University of Oklahoma, explained that he accepted the chairmanship position at Chesapeake, the second largest U.S. natural gas explorer, because he believes Chesapeake is the one company that has shown the leadership, technical expertise and committed the capital to explore and discover the role Shale plays in North America.

“When the history of the petroleum industry is written 50 years from now, Chesapeake will be given much of the credit for discovering oil and natural gas in Shale and, hopefully, helping America become energy independent for the first time in our lifetime,” he said.

He said he doesn’t believe his strong faith has been a problem in his business dealings through the years.

“I don’t know of any business I’ve lost because of my faith, but I recently discovered a personal opportunity I missed out on—the chance to become a White House fellow in the 1970s—because of assumptions made when I shared my faith in the interview,” he related.

He added that he doesn’t know that his faith has brought him more business either, but “people recognize others with integrity, and when they have the choice, want to do business with them.”

Dunham values honesty and lives by moral principles, which are rare among business people today.

“Integrity and ethics are among the responsibilities of all our corporate leadership, especially myself,” Dunham expressed. “Integrity and ethics must be evident in not only our personal lives, but also in our professional conduct before they can be instilled in our employees.”

Dunham noted that applying biblical principles in a publicly traded company is not easy, but it can be done.

“When I was with Conoco, a group of employees requested to hold Bible studies at the corporate headquarters, and the company allowed it,” he said. “In doing so, it also allowed other religions to host their own meetings.”

Although Dunham has had many honors, including being inducted into the Oklahoma Hall of Fame in 1998, International Achievement Award by B’nai B’rith; Horatio Alger Association of Distinguished Americans; Ellis Island Medal of Honor; Offshore Energy Center Hall of Fame and Houston Baptist University Spirit of Excellence Award, he says his greatest honor was being named Father of Year by Community Partners of Houston.

Dunham and his wife, who have been married 52 years, are parents of three children, Steven, Laura and Cary and eight grandchildren.

“My most important role is husband, father and grandfather,” he proclaimed.

Dunham said his best advice to young people beginning their trek into the world today is to realize God has a perfect plan for each of them.

“We can discover that plan at age 18 or age 40,” he said. “They key is to commit your career, your family and your life to His perfect will. If you do that, you will discover His perfect plan. Seek His direction in the tough decisions of life through prayer and Bible study, and He will take charge of your career and life.”

Dunham reiterated that God’s guidance in his life has been the major reason for the success he has achieved.

“The Bible tells us in Jer. 29:11 that God has a perfect plan for every one of us,” he said. “That plan may not always lead to riches; it may not lead to being the CEO of a big company, but there is that perfect place for you where you can have joy, peace and happiness. Those things are really important in life, but the key is making Christ the Lord of your life and then encouraging others to do the same.”