Who was Edna McMillan? 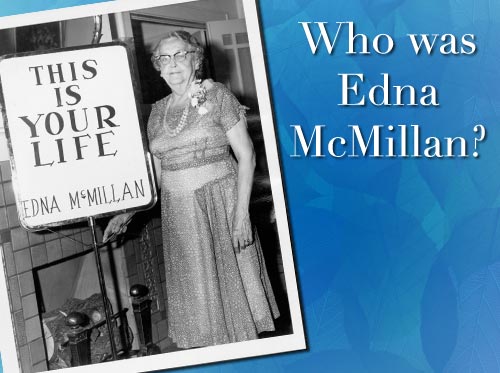 The Oklahoma State Missions Offering is named in honor of Edna McMillan, a woman who led the passionate cause of reaching Oklahomans with the Gospel.

After graduating with honors from the Huntsville Female College in Alabama in 1890, she married a young Baptist man, George McMillan. She respected his quest for godly character, and was inspired when she first met him during a church service where he pledged a generous amount to a special missions offering.

Both of the McMillans became faithful stewards of their time and their resources. George served in church and worked in the oil business. They settled in Muskogee in 1902 and spent most of their lives in Bristow. Edna held numerous roles in the church and worked diligently and tirelessly for Oklahoma Woman’s Missionary Union. She held many positions in WMU and served as state WMU president for 11 years from 1927-1938.

Edna was an effective communicator and consistently challenged Oklahoma Baptists to give generously to state missions. In 1932, she said, “A rich man is one who has enough for himself and enough left over to help others. Though he be possessed of millions, a man is poor, who has only enough for himself.”

The state WMU Board in 1939 met in Muskogee, where Edna was surprised to hear the recommendation and later unanimous vote to name the State Missions Offering in her honor. Through her many travels and days away from home to champion the mission cause, Edna never accepted a penny for her expenses.

God gave Edna McMillan the understanding that there is no better time to reach the lost than today. She understood that Now Is the Time to reach Oklahomans with the Gospel. Will you continue in her legacy?