Angels we have heard on high

This is such a beautiful carol. It’s one of the most joyful and well-written choruses ever composed. The English version was written in 1862 by James Chadwick, a Roman Catholic Bishop in the north east of England, and is most often sung to the tune of a traditional French carol “Gloria.”

The lyrics are based on an original French song “Les Anges dans nos campagnes” (literally “the Angels in our countryside”). It depicts the story of the nativity as told in Luke 2, where a whole company of Angelic hosts appear to a small group of unassuming shepherds in the countryside.

Shepherds, why this jubilee?
Why your joyous strains prolong?
What the gladsome tidings be?
Which inspire your heavenly songs?

As the angels gather in the night sky, they proclaim: “Glory to God in the highest heaven, and on earth peace to those on whom his favor rests,” (Luke 2:14).

And this is where the song’s memorable refrain comes from; the line ‘Glory to God in the Highest heaven,’ translated into Latin becomes:

And it’s sung with that wonderfully prolonged “o” of Gloria which is such a delight to sing and captures something of the joy and reverence of heaven.

My favourite verse is the fourth one:

What must it have been like for the shepherds to witness a sky full of worshiping angels 2,000 years ago? It must have been incredible. With this carol, we are invited to join in with their worship and to add volume to the heavenly sound as we declare the birth of our King.

A great Christian life or a great sermon or a great song have a way of showing Christ to be so vast and glorious that our response can only be to humble ourselves, to bow down on bended knee and to acknowledge and be in awe of the greatness of our God. I think this carol enables us to do that really well. 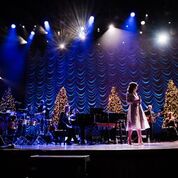