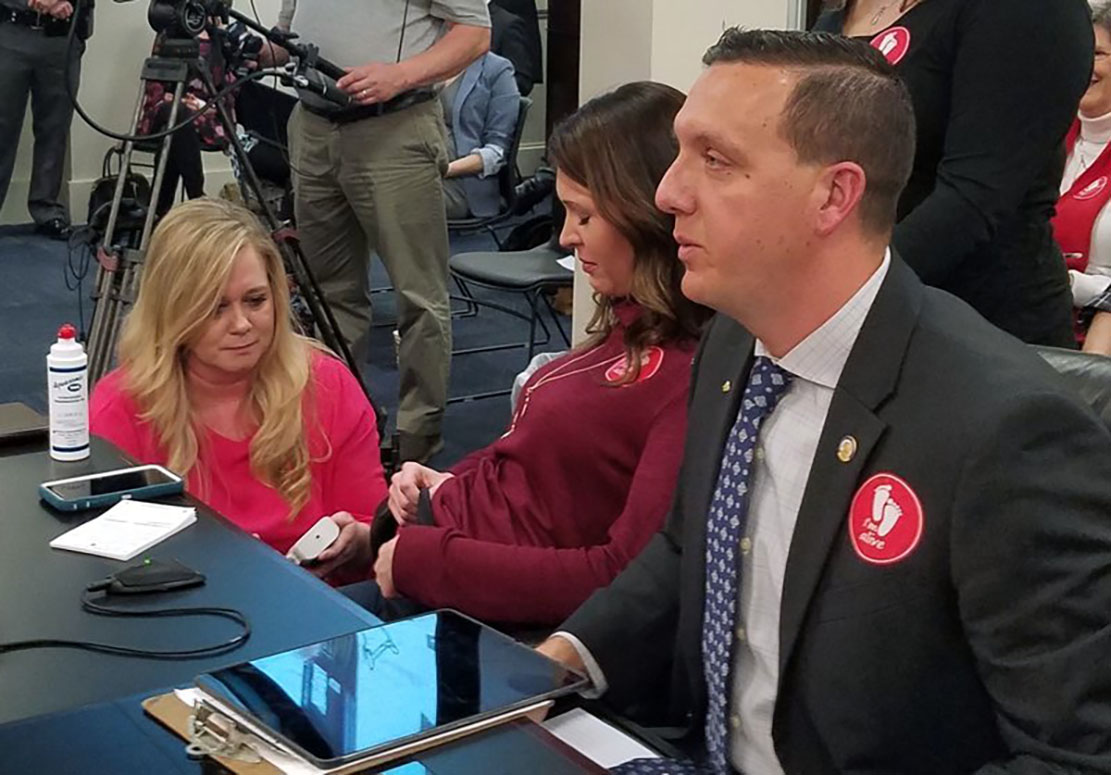 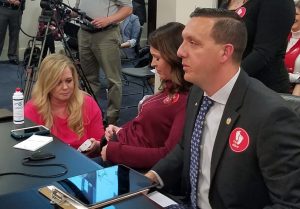 April Lanham, center, undergoes a procedure in Frankfort, Ky., that allows the audience at a Kentucky legislative meeting to hear her unborn son’s heartbeat, Thursday, Feb. 14, 2019 in Frankfort, Ky. The U.S. Supreme Court made a decision to keep in place a law that requires doctors to give an ultrasound and show fetal images to patients before abortions.
Photo from Kentucky Today/Tom Latek

WASHINGTON (BP)—Pro-life supporters in Kentucky were pleased with a decision by the U.S. Supreme Court on Monday, Dec. 9 that left in place a Kentucky law requiring doctors to perform ultrasounds and show fetal images to patients before abortions.

The justices did not comment in refusing to review an appeals court ruling that upheld the law.

The American Civil Liberties Union had challenged the law on behalf of Kentucky’s lone remaining abortion clinic in Louisville. The ACLU argued that “display and describe” ultrasound laws violate physicians’ speech rights under the First Amendment.

The federal appeals court in Cincinnati upheld the Kentucky law, but its sister court in Richmond, Va., struck down a similar measure in North Carolina.

In Kentucky, doctors must describe the ultrasound in detail while the pregnant woman listens to the fetal heartbeat. Women can avert their eyes and cover their ears to avoid hearing the description or the fetal heartbeat. Doctors failing to comply face fines and can be referred to the state’s medical licensing board.

“This means the 6th Circuit (Court of Appeals) opinion in our favor will be upheld,” said Steve Pitt, the general counsel for outgoing Gov. Matt Bevin. “The mandate we’ll issue shortly, the stay will be lifted and presumably the requirement that ultrasounds be performed and doctors describe what is in the womb, will begin within a few days now. We assume and trust that is what will be enforced.”

The law was passed in 2017 and signed by Bevin, a pro-life governor who said that agenda was one of the hallmarks of his term.

“We thank the Lord for this decision. We also thank state leaders for protecting the unborn,” he said. “People who are pro-life want mothers to have as much information as possible, so they can make the best decision for their babies.”

Pitt says there had been similar cases before the Supreme Court.

“Two circuits, the 7th and the 5th, issued opinions consistent with ours. The 4th Circuit arguably had an opinion that was inconsistent,” he said. “The 6th Circuit ruled our way, and the Supreme Court refused the abortion clinics for an appeal.”

Pitt explained the effect of the Supreme Court decision.

“It simply means that the law that was passed in 2017, requiring that doctors who perform abortions show an ultrasound to the patient before the abortion is performed, and describe what is depicted in the sonogram, and that the heartbeat be made audible, unless the mother does not want to hear the heartbeat, (will take effect),” Pitt said. “It’s a five-minute procedure that takes place before the abortion is performed, to give the women who might have a lack of understanding of what’s actually in the womb—that’s a real, living human being there—they might change their mind.”

Marjorie Dannenfelser, president of the national pro-life group Susan B. Anthony List, said modern technology “opens an unprecedented window into the womb, providing undisputable evidence of the humanity of the unborn child.”

“The abortion industry has proven incapable of policing itself and will stop at nothing to keep the vulnerable women in the dark for the sake of profit, which is why state laws protecting women’s right to informed consent are so important,” she said in a statement.

The ALCU reacted with disappointment to the decision.

“By refusing to review the Sixth Circuit’s ruling, the Supreme Court has rubber-stamped extreme political interference in the doctor-patient relationship,” said Alex Kolbi-Molinas, senior staff attorney at the ACLU Reproductive Freedom Project, in a release. “This law is not only unconstitutional, but as leading medical experts and ethicists explained, deeply unethical.”

Since Pitt is joining Attorney General-elect Daniel Cameron as his general counsel when Cameron takes office Dec. 17, he was asked about the status of other pro-life lawsuits currently pending in the courts.

“That’s yet to be determined,” he said, in a similar response to how Gov.-elect Andy Beshear answered the question.

Tom Latek is the capitol correspondent for Kentucky Today (kentuckytoday.com), a news resource of the Kentucky Baptist Convention.

View all posts by Tom Latek

View all posts by Mark Maynard