NEW YORK (BP) — One of the largest ever pro-life events happened in the heart of New York City’s Times Square on Saturday afternoon (May 4).

Estimates of 20,000 people gathered for an event called “Alive from New York” that was designed by Focus on the Family to celebrate the sanctity of human life in response to New York state’s radical new abortion law that allows abortion of viable babies right up until the moment of birth. 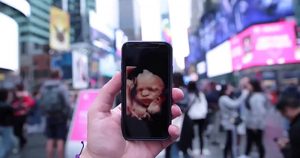 This is a photo of the 4D Ultraround that thousands saw in Times Square on Saturday (May 4) during a pro-life event. The unborn baby shown belongs to Abby Johnson, the former Planned Parenthood director whose story is the focus of the pro-life movie “Unplanned.”
Screen grab from Focus on the Family tweet

The crowd listened to live music and heard speeches from special guests and abortion survivors. However, the highlight of the event was a live 4D ultrasound presented on the massive digital screens overlooking Times Square and live-streamed by Focus on the Family.

Abby Johnson, the former Planned Parenthood director whose story was told in the pro-life film “Unplanned” that has appeared to have given the pro-life movement momentum, amplified her unborn baby’s heartbeat for everyone to hear as she underwent the 4D ultrasound.

“This is a baby. This right here is a baby,” Johnson said while patting her stomach. She appeared on stage after the ultrasound and declared that “life is winning.”

“We will see a day when abortion in this country is unthinkable,” she said.

Vice President Mike Pence highlighted the ultrasound on Saturday with a tweet. “As Democrat Governors in NY & VA advocate for late term abortion & even infanticide — & Democrats in Congress refuse to allow a vote on the Born-Alive bill — TODAY in Times Square an ultrasound will be shown for all to see, demonstrating the miracle of life,” he said.

The rally came just months after New York Gov. Andrew Cuomo signed controversial legislation that would allow women to have abortions up to the point of birth. That law, along with other initiatives, prompted criticism from President Donald Trump during his State of the Union in February.

Cuomo pushed the law to pre-empt a Supreme Court decision that would strike down legal protections coming from the high court’s decision in Roe v. Wade.

New York’s government came under criticism once its controversial bill was passed and it celebrated by lighting up One World Trade Center in pink.

Alveda King, the niece of Martin Luther King Jr., talked about having an ultrasound in the 1970s after having a live birth, two abortions, and a miscarriage.

“I saw a little baby, a beating heart, a live baby, and I said … my uncle is right, injustice anywhere is a threat to justice everywhere,” she said.  “A woman has the right to choose what she does with her body, but the baby is not her body. Where’s the lawyer for the baby?”

“How can the dream survive if we murder the children?” King said. She spoke in support of women’s health, adding, “There has to be a way to serve all of humanity without killing humanity.”

The event highlighted human development in the womb and encouraged advocacy for women facing unplanned pregnancies and the preborn.