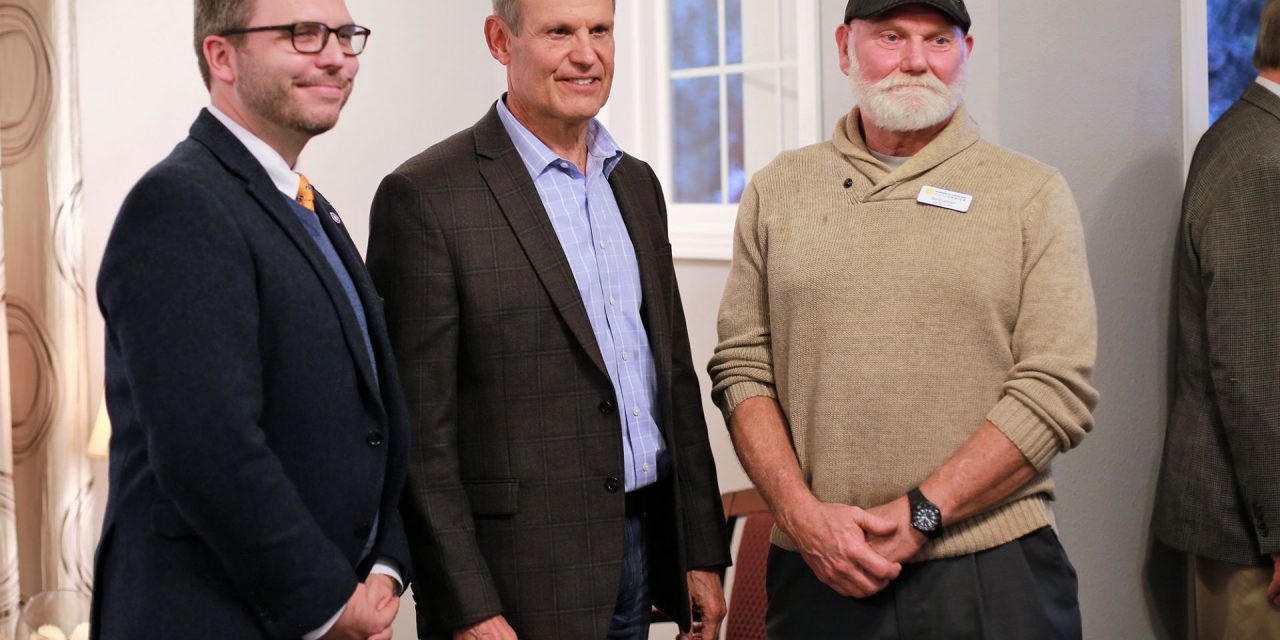 Above: Brent Leatherwood, left, the ERLC’s acting president, and Brent Lambert, right, Birth Choice’s executive director, gather with Tennessee Gov. Bill Lee at a dedication ceremony in Jackson for an ultrasound machine placed by a grant from the state to the Psalm 139 Project. Photo by Melissa Higgins.

JACKSON, Tenn. (BP) – For Tennessee Gov. Bill Lee, partnering with the Psalm 139 Project in the placement of ultrasound machines at pregnancy resource centers in the state is one manifestation of what he describes as a long-standing desire.

Speaking Friday, Nov. 12, in Jackson, Lee told an audience gathered at the Birth Choice center for the dedication of an ultrasound machine, “(O)ne of the most important pieces of my job is to protect the lives of individuals in Tennessee. … But there’s no one in our state that’s more vulnerable than the unborn. And protecting the unborn is something that has long been in my heart as important for us to do as humans. … It’s long been in (his wife Maria’s) heart as well.

Birth Choice received the machine for one of its mobile units as a result of a grant initiated by Lee in the 2021-22 state budget for the Psalm 139 Project, a ministry of the Southern Baptist Ethics & Religious Liberty Commission (ERLC). Psalm 139 received a grant of $182,900 from the state to fund the placement of seven ultrasound machines at pro-life pregnancy centers in Tennessee. Private gifts to Psalm 139 underwrite the training of staff in the use of the technology.

The dedication in Jackson came the same day supporters of a pro-life law in Tennessee received good news. State Attorney General Herbert Slatery announced the deadline had passed for abortion providers to appeal to the U.S. Supreme Court a lower-court decision upholding Tennessee’s 2015 measure that requires a 48-hour waiting period before an abortion.

The ERLC expects to place a total of as many as 25 ultrasound machines during 2021, including the seven provided by the state grant. It also has a goal of making 50 placements between December 2020 and January 2023, the 50th anniversary of the Supreme Court’s Roe v. Wade decision that legalized abortion throughout the United States.

Ultrasound technology has proved to be a vital tool for pregnancy resource centers in their ministry to women considering abortion. The sonogram images of their unborn children have helped many women choose to give birth.

Birth Choice, which began providing services in western Tennessee more than 33 years ago, says 80 percent of its “abortion-minded clients” have chosen life for their unborn children. The network of stationary centers in Jackson and Trenton and two mobile units that serve five counties has recorded 134 babies’ lives saved this year, according to a Birth Choice spokesperson. As a medical clinic, it provides not only ultrasounds but such services as pregnancy testing, counseling, sexually transmitted disease testing, parenting classes and a post-abortion healing program.

The machine provided by the Psalm 139-Tennessee partnership enables Birth Choice not only to serve counties “that have high abortion rates with no pregnancy center available to them, [but] it also makes it possible to send out mobile units to them twice a week,” Birth Choice Executive Director Brent Lambert said in an ERLC news release. “The ERLC has truly made these babies’ pictures worth a thousand words and enables these babies to live a thousand dreams in a life that is very unsure for many of them.”

Elizabeth Graham, the ERLC’s vice president of operations and life initiatives, said in the release she was excited to partner with Birth Choice and to support its “mission to share the hope of the Gospel with West Tennessee.”

Birth Choice “is doing remarkable work to serve vulnerable mothers and save preborn babies,” she said, adding that she is thankful “for the generous partnership between our state leaders, including Tennessee Gov. Bill Lee, and the Psalm 139 Project so we can gift centers like Birth Choice with these life-saving machines at no cost to them. We will continue this work until abortion becomes illegal, unthinkable and unnecessary across the world.”

In introducing Lee to an audience standing in the rain at the dedication ceremony, ERLC Acting President Brent Leatherwood described Lee and the state’s legislators as “partners for life” in the first such collaboration “we have ever been able to have with state government.” He described the governor as a pro-life leader who “defines that very term.”

Lee told those gathered for the dedication, “Everyone of us is created in the image of God, certainly the unborn, and we have an obligation and the opportunity to protect the unborn, not only through legislation but just through the efforts that we make in the community.”

The governor told reporters after the ceremony, “(O)ne of the things that is particularly beneficial to the clients that come here is they’re able to see more of what’s happening inside their bodies as a result of the ultrasound. This is just an important work in this community.

“Women in this community need access to care, and they need access to information, and this increases that access because it provides ultrasound services, help services for women in this region and in surrounding countries,” said Lee, who said he served about 25 years ago on a board for a center similar to Birth Choice. “So it’s really an increase in access to information around women’s health, and we’re proud to be a part of that.”

The grants to Psalm 139 and other nonprofit organizations were part of the administration amendment Lee offered to the budget, which was approved by the General Assembly. In May, Lee signed into law the $42.6 billion budget that included the grants.

Since 2004, the Psalm 139 Project, which is funded by contributions from donors, has helped place ultrasound equipment at centers in 16 states. The project made its first international placement in September in Northern Ireland.

The full Sixth Circuit Court of Appeals in Cincinnati upheld Tennessee’s requirement of a 48-hour waiting period in a 9-7 decision in August. The appeals court reversed a federal judge’s ruling and its own three-judge panel. The legislature approved the waiting period after a 2014 referendum clarified the state constitution does not safeguard a right to abortion and granted power to the law-making body to act on abortion.

In announcing the law would not be challenged further, Slatery said the Sixth Circuit “recognized the validity of a law passed by the people’s representatives and did not substitute its own judgment for the policy decision made” by the legislature and governor.