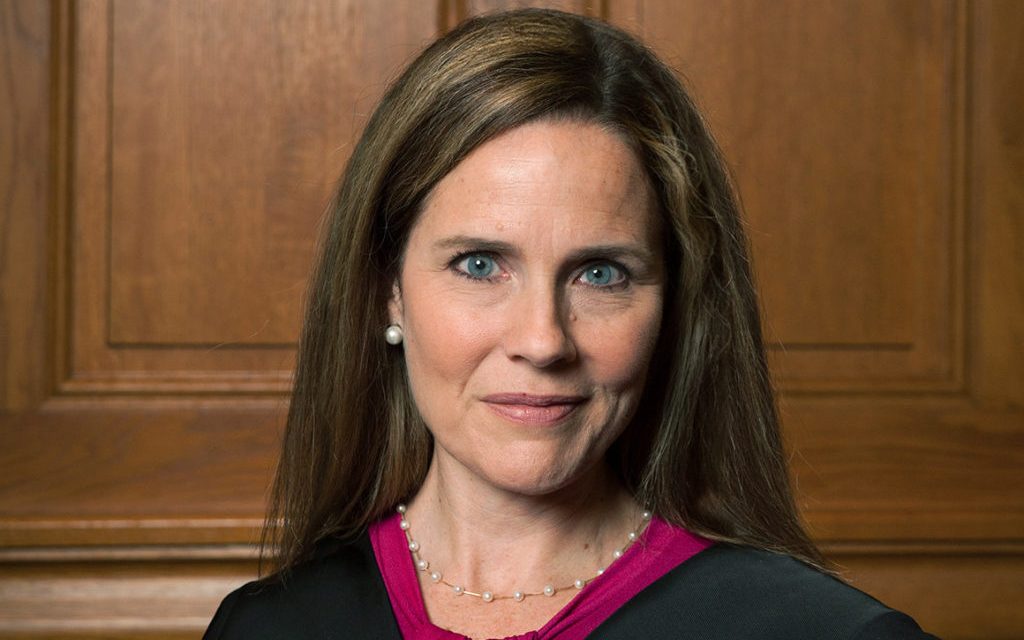 As expected, the president announced at the White House his choice of Barrett to succeed the late Ruth Bader Ginsburg, who died Sept. 18 after 27 years on the high court. Trump’s selection of Barrett, a judge on the Seventh Circuit Court of Appeals in Chicago, means he has selected a conservative or originalist to replace a liberal icon on the court.

If confirmed, Barrett would become the third justice Trump has placed on the nine-member court during his four years in office. He previously nominated, and the Senate confirmed, federal appeals court judges Neil Gorsuch and Brett Kavanaugh.

Trump’s decision to submit a nominee before the November election has met strong objections from Democrats especially, who believe such an action should wait until American voters have chosen a president for the next four years. Senate Majority Leader Mitch McConnell’s plan to hold a Senate confirmation vote for Trump’s nominee also has received criticism.

Barring an unforeseen development, it appears the Republican majority has enough votes to confirm Barrett. The Judiciary Committee’s hearings, yet unscheduled, and Senate floor debate promise to be contentious regarding her writings and seemingly her religious faith.

“There is no question that Judge Barrett is qualified by intellectual acumen and years of experience to serve on the highest court in the land,” said Moore, president of the Ethics & Religious Liberty Commission (ERLC). “I am praying for her, her family and our nation in what are sure to be tumultuous days in the weeks ahead for the entire country.”

Floyd, president of the Executive Committee, described Barrett as “one of the most gifted legal minds in America today.”

“In her words, ‘I love America and the Constitution,’” Floyd said, citing her remarks during Saturday’s announcement ceremony. “She is known to be a woman of deep Christian faith, a committed wife and the mother of seven children. She is more than deserving to receive not only the nomination to be the next justice of the Supreme Court but also deserves to be confirmed by the United States Senate.”

In making his announcement in the Rose Garden, Trump called Barrett, whom he nominated to the Seventh Circuit Court in 2017, as “a woman of unparalleled achievement, towering intellect, sterling credentials and unyielding loyalty to the Constitution,” he said. As she stood on the platform with him, Trump said Barrett “will decide cases based on the text of the Constitution as written.”

Liberals are concerned Barrett’s addition to the high court could provide conservatives with a decisive majority for many years. She clerked in 1998-99 for the late Associate Justice Antonin Scalia, who championed during his 30 years on the court the philosophy of interpreting the Constitution based on its original meaning and laws according to their text. Like Scalia, Barrett espouses originalism.

“His judicial philosophy is mine too,” Barrett said after Trump’s introduction of her. “A judge must apply the law as written. Judges are not policy makers, and they must be resolute in setting aside any policy views they might hold.”

Barrett, 48, would be considered the sixth conservative among the justices, but that ideological evaluation has not always produced the results that might be expected. In June, the Supreme Court ruled in a watershed decision the category “sex” in employment non-discrimination law applies to homosexual and transgender employees. Gorsuch and Chief Justice John Roberts—considered conservatives when confirmed to the court—joined the four-member liberal wing in the majority.

Abortion rights advocates and other liberals are especially troubled about how Barrett would vote in abortion cases, including the possibility she would support the reversal of Roe v. Wade, the high court’s 1973 opinion that legalized an expansive right to abortion nationwide.

Her faithful practice as a Catholic brought challenges from senators who opposed her confirmation to the Seventh Circuit Court three years ago. Most famously, Sen. Dianne Feinstein, D-Calif., told Barrett in a hearing “the dogma lives loudly within you.” Feinstein received criticism for applying what some considered an unconstitutional religious test. Since Barrett became a front-runner for nomination to the Supreme Court, some critics have again questioned her ability to serve as a justice because of her religious faith.

The ERLC’s Moore acknowledged the nomination’s circumstances “mean that this could be a highly charged confirmation process in an already polarized nation.”

“No serious person actually believes that Judge Barrett would be a theocrat imposing her religious views on a pluralistic republic,” he said. “In fact, her record shows otherwise, as confirmed even by many who disagree with her rulings.”

Moore called for the debate to be “about her qualifications and her record, not about her personal religious views or affiliations.”

Barrett taught at the University of Notre Dame Law School for 15 years before joining the Seventh Circuit Court. Her husband Jesse and she have seven children, including two adopted from Haiti and a son with Down syndrome.

Moore said he has “long respected” Barrett, “not only as a highly accomplished jurist but also as an adoptive parent active in the advocacy for adoption and for special needs children.”

“Judge Barrett is a highly respected jurist,” Dilbeck said, “and her affirmation of the pro-life position is greatly encouraging to me, as is the fact that she is a person of faith and an adoptive parent. I will continue to pray for our nation’s leaders at this key time.”

Since Ginsburg’s death, two Republicans—Sens. Susan Collins of Maine and Lisa Murkowski of Alaska—in the GOP’s 53-seat majority have said they do not support a confirmation vote on a nominee at this time, but no other member of the party has joined them. If a confirmation vote is not held before the Nov. 3 election, McConnell still might call for such action afterward, even if Trump were to lose.

A private ceremony for Ginsburg was held Sept. 23 at the Supreme Court, and her body lay in repose at the court for the remainder of the day and Sept. 24. Her body lay in state at the U.S. Capitol Friday, Sept. 25.

In the Rose Garden ceremony Saturday, Barrett said Ginsburg “not only broke glass ceilings. She smashed them. For that she has won the admiration of women across the country and indeed all over the world.”