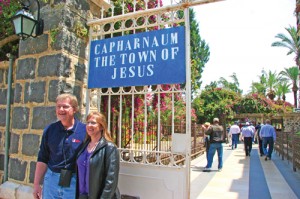 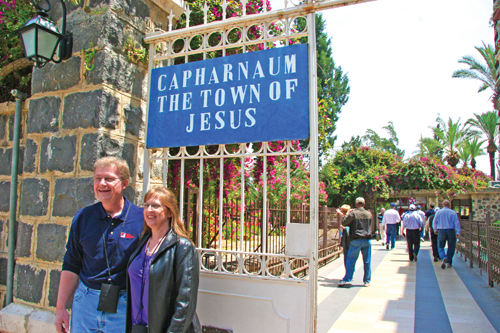 After two days of concerts in Israel, the Singing Churchmen of Oklahoma were able to pack away their tuxedos and enjoy the sites of the Holy Land, although their ministry continued as they did improptu songs at many of the holy sites. With Armenia still in their hearts and minds, the Oklahomans split into two groups for concerts at Hillel Street Assembly and Dar Annadwa Hall (Bethlehem Lutheran Center) shortly after they landed in Israel. The concerts in Bethlehem were especially for the people in that area since none of the residents is allowed to leave the city. A Palestinian area, Bethlehem is confined behind a 600-mile wall, and only those with special permits can go beyond the wall.

Dale Thorne, a missionary in the Middle East for 49 years, told the Churchmen it was important that they came to the people of Bethlehem because those people would not be able to attend the concerts in Jerusalem the next day.

The Churchmen and their traveling companions actually stayed in the city of Bethlehem because accommodations were less expensive there. They had to go through check points every time they entered or left the city. At one time, two of the six bus loads were asked to exit the buses and proceed through security on foot. However, once authorities saw they were all Americans, they were ushered through rather quickly.

The Saturday night concert in Bethlehem was compared to the choirs that sang 2000 years ago in the same city celebrating the birth of Jesus.

At Ramallah, where Larry Nigh, pastor of Ponca City, Northeast, preached, 15 people made professions of faith.

“There are Jerusalem Baptist churches in the United States, but this is the real thing,” he said.

Sunday afternoon, the groups came together to perfom three concerts at the YMCA Auditorium in Jerusalem, an historic hall known all over the Middle East.

In introducing the Churchmen, Nucciatone said music goes across borders and unites people.

“Not only is Oklahoma known for cowboys and Indians and the most powerful college football team in the nation, but also for their music,” he told the crowd.

Les Davidson, Norman, Bethel, said at the first of three concerts at the YMCA, he noticed a small Jewish man wearing his yarmulke.

“After the concert, when we visited with the attendees, I made a point to find him to let him know how much I appreciated him attending in view of his obvious Jewish convictions,” Davidson recalled. “We had a short, pleasant visit, but after the second concert, he walked up to me with a big hug, told me he attended the second concert, how much he enjoyed it and that it made him feel good.”

Davidson said he couldn’t believe it when the same man came to him after the third concert, with another big hug and a friend he had brought with him.

“He had attended all three concerts that afternoon and evening,” Davidson said. “He told me again how good it made him feel inside. I told him this surely was the Holy Spirit, and I would pray that this Spirit would continue to ‘deal’ with him.”

A disappointment that carried over from Armenia to Jerusalem was the cancellation of the concert for the Armenian Community inside the Old City of Jerusalem.

“Persecution followed us to Jerusalem,” said Bill Green, director of the Churchmen. “There has never been a Christian witness in the Armenian community here. The Lord knows our hearts were ready to do it. However, we understand some of those people were at the concerts at the YMCA.”

With the Armenian concert cancelled, the group spent Monday-Wednesday traveling to several holy sites, including the Wailing Wall, Via Dolorosa, Pilate’s house, Dome of the Rock, pools of Bethesda, St. Anne’s Church and Church of the Holy Sepulcher, supposedly built over the site of the crucifixion and burial.

They also visited the Mt. of Olives, Golden Gate, Gethsemane, Mt. Zion, Solomon’s pools, shepherd’s fields, Church of the Nativity, which houses the birthplace of Jesus, and the Garden Tomb, where they held a private worship service.

One day was spent in the countryside traveling to the Mount of Beatitudes, Capernaum, Church of Loaves and Fishes and Tiberias. The day concluded with a worship service on the Sea of Galilee, with three boats anchored together.

At almost every site, the Churchmen, who were divided into six groups for ease of travel, either sang, prayed or read Scripture, with other groups gathering around to hear them.

Green said he is thankful for the many people who worked to make the Churchmen’s trip a success.

“We had programs for the concerts in Israel printed in Hebrew, Russian, Arabic and English,” he said. “This was done for us at no cost by a printer who believed in what we were doing.”

“You came to minister to my people,” he said. “And I want to contribute.”

Don Scott, minister of music at Nicoma Park, First, and president-elect of the Churchmen, summed up the trip when he said he believes worship in Oklahoma will be enhanced because of the experiences of the worship leaders in Israel.

“Just being where Jesus’ ministry took place, will change you,” he said. “And we saw the reality of all we’re living for at the garden tomb with the sign that says: “He is not here. He is risen.”