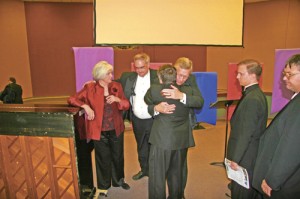 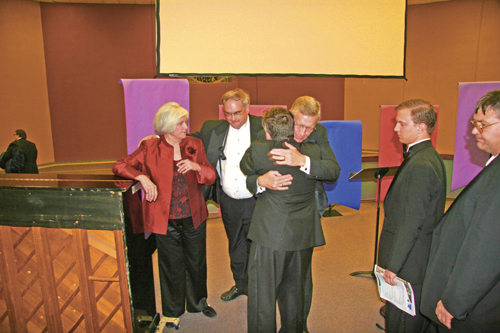 They began as a fun group. Whenever they were together, they would sing in spontaneous and impromptu fashion, just for the fun of it. Then Gene Bartlett, director of church music for the Baptist General Convention of Oklahoma, visualized a building at Falls Creek Baptist Conference Center as a permanent memorial to the great hymn writer B.B. McKinney.

The group, who would soon be known as the Singing Churchmen of Oklahoma, responded in practical fashion, with plans for taking a tour and making a record with all proceeds to go toward the Falls creek building project.

That was the beginning of one of the premiere singing groups in the Southern Baptist Convention.

Since the Churchmen’s inception in 1961, the group has been led by only two full-time directors—James D. Woodward, dean of the school of music at Oklahoma Baptist University, who was killed in a plane crash in 1991, and Bill Green, BGCO director of church music and associate executive director, who retired from that position in 2007.

But a third director looms on the horizon as Green has announced he is stepping aside as director of both the Churchmen and the Singing ChurchWomen of Oklahoma, who were organized in 1989. Woodward also directed that group before Green became director in 1991.

Green is passing the baton to Ken Gabrielse, BGCO worship and music ministries specialist, who joined the staff in 2008.

Green’s announcement came following the reunion concert of the Churchmen on May 12, after they returned from a mission trip.

Green told the men he has felt his direction of the Churchmen and ChurchWomen was a sacred honor.

“When God called me back to Oklahoma to serve as the director of church music, a terrible tragedy had occurred, killing four of our treasured friends in an airplane accident,” he recalled. “I knew that one of my responsibilities would be to lead our singing groups through a time of grief and then help them to focus on the future. This would be exactly what Jim Woodward, Mary June Tabor and Paul and Judy Magar would have desired. Many of you have been with me through the entire 18-year journey, and others have joined at later times; none the less, the vision goes on and the future is bright.

Green has led the Churchmen on mission trips to Russia, China, Australia and Israel, as well as a mission to Salt Lake City, Utah, during the Southern Baptist Convention. The ChurchWomen have traveled under his direction to Brazil, Romania and Hungary, and also participated in the Salt Lake City ministry and the dedication of the latest Baptist Hymnal at Glorieta.

“These trips, in my spiritual memory bank, were personal, life-changing experiences,” he said. “These times were God-anointed with literally hundreds of thousands of people coming to know Christ.”

The Churchmen, 307 voices strong, and the ChurchWomen, with 465 singers, also have appeared frequently on state convention and evangelism conference programs.

Green told the groups that Gabrielse is an excellent musician, a dedicated Christian, a fine conductor and a capable leader.

“I have no doubt that God called him to Oklahoma as the worship and music specialist,” Green announced. “I know you will be in great hands as he takes over the blessed responsibility of leading the finest two choral groups in the world.”

Green reiterated that Gabrielse has long served Southern Baptists well. He reminded the Churchmen that he has been at every concert the last year, and “has already shown his love for you.”

“Ken will be a compassionate leader for the future successes and opportunities that will come for you,” Green told the groups.

Green said he will do his best to be a loyal and faithful member as a singer in the baritone section.

“I will do my very best to be at every rehearsal, concert and trip which will be planned in the future,” he said. “I will be honored in friendship to stand with you as we praise the name of Jesus.”

Green noted he will continue to stay active in the future leading choir clinics, workshops, seminars, doing interims and music supply and other opportunities afforded to him. He is currently interim minister of music at Oklahoma City, Village.

“I will keep the Singing Churchmen and Singing ChurchWomen a top priority in my life,” he said. “My love for you and my support of you has never wavered and never will. I will continue to stand with you and by your side in friendship and ministry until the day I die.”

Following Green’s announcement, one of the men requested Green lead the Churchmen in singing his “signature song” from Falls Creek—”Saved, Saved.”

Somewhat reluctantly, Green raised his arms to start the song saying, “I guess there are worse things to be known for.”

Gabrielse came to his current position from New Orleans Seminary, where he was chairman of the division of church music ministries and professor of church music.

A graduate of Enid High School, he holds a master of church music and a doctor of musical arts (specialization in conducting) from NOBTS. He is a member of the American Choral Directors Association, and has served as conductor with the Louisiana Philharmonic Orchestra and the New Orleans Civic Symphony.