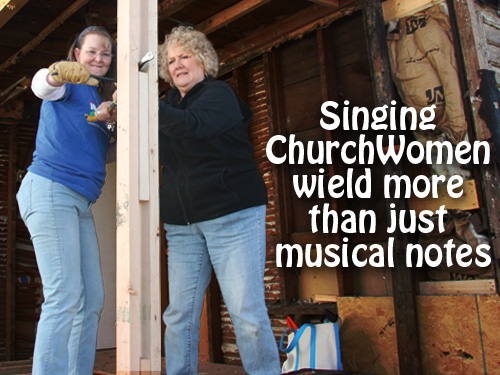 JOPLIN, Mo.—The Singing ChurchWomen of Oklahoma can do more than just sing. Wielding hammers, chain saws, crow bars and other heavy duty tools, about 130 of the singers descended on Joplin, Mo., Nov. 18-19, not only to bless with their musical abilities, but also to make a difference in the city which was devastated by an EF5 multiple-vortex  tornado on May 22.

Although it has been six months since the costly twister tore a six-and-a-half -mile path through the southern part of the city, the destruction left by one of Missouri’s and America’s deadliest tornadoes (162 known dead) is still evident, and much clean-up and rebuilding remain to be done.

It was into this scene that the Oklahoma singers came to present a concert on Thursday night at First Church, and to work in clean-up and restoration on Thursday and Friday mornings.

Patricia Farewell, ministry assistant in the Baptist General Convention of Oklahoma worship and music ministries office, said when the ChurchWomen were planning their 2011-12 schedule, every concert date was filled except for November .

“God closed every door in Oklahoma for a concert,” Farewell said.

Linda Teel, a member of Big Cabin Church in Craig-Mayes Association, said she contacted her son-in-law, Jason Taylor, minister of music at Joplin, First, and asked him if he would be open to hosting the ChurchWomen in November.

“We had talked about making our concerts more missional, doing mission projects in the cities where we do concerts,” said Bart Morrison, interim director of the ChurchWomen. “Joplin was a great opportunity to initiate this. It was unique to be able to minister to their physical needs during the day, and then in the evening, lead them in worship and tell them the story of Jesus.”

Some of the women came early and worked on Thursday morning before rehearsal that afternoon, and some stayed over to work on Friday morning.

Teel, because her daughter and family live in Joplin, had been helping in various areas since the tornado, and was in the city the week the TV show “Extreme Makeover Home Edition” constructed seven houses in seven days.

“I had worked earlier on the property cleaning debris, so it was exciting to see the houses go up,” said Teel.

Many of the women were sent to a large warehouse, which recently received clothing and other items from a warehouse in a nearby city, where donations had been stored.

Steve Patterson, director of missions for Spring River Association, where Joplin is located, explained that so many donations came in after the tornado that warehouses had to be opened in nearby cities to accommodate the mass of goods.

“When they moved the clothing to this location, they were screaming for volunteers to sort and size things for a giveaway that started the Friday the ChurchWomen were in town,” Patterson said. “So the timing was perfect.”

Some other women repaired the roof and did dry wall work in the home of a lady, who admittedly was anti-Christian before the tornado destroyed her home.

But, as a result of Christian ministry after the twister struck, the lady is now a born-again believer herself and a member of First Church in Joplin.

About six women traveled to Watered Gardens, a gospel rescue mission, and gathered laundry to take to a laundromat.

While the women were doing 19 loads of laundry, Tennie Bright, a member of Tulsa, First, noticed an African American woman sitting inconspicuously at a table in the back.

“We went to speak to her, and she said her name was Josephine,” said Bright. “She had a pink scarf tied around her head, and told us she had a brain tumor. She was there drying her daughter’s laundry. She had hand washed it at home and brought it to the laundromat to dry because she couldn’t afford to both wash and dry the clothes.”

Bright told the woman why the ChurchWomen were in town and where they were doing  a concert.

“She asked if the church had any food,” said Bright. “We discovered there was food available, and because she had a car, she was able to go to the church and obtain some food.”

Bright said the ChurchWomen prayed with the woman.

“I believe she’s why God sent us to the laundromat,” Bright observed.

Other members of the singing group cut down trees and split logs, demolished a bathroom that wasn’t up to code and did clean-up in several yards that were still covered with debris.

Kenille Elmore, a member of Tulsa, First, and president of the Singing ChurchWomen East, told the Thursday night concert crowd, “We know how it feels when the wind comes sweeping down the plains.”

She said in Oklahoma, all you have to say is May 3, and people know what you are talking about.

“Now, forever in Joplin, all you have to say is May 22,” she noted. “If anyone can sympathize with you, we can.”

She said so many have been touched by the tornado.

“My nephew and his wife, who live at Grand Lake, had been shopping in Joplin that day, and were trying to decide whether to eat dinner there or go home,” she recalled. “My niece said it looked like a storm was brewing, so they decided to go home, and exited Joplin 30 minutes before the tornado hit.”

During the concert, the ChurchWomen presented Patterson with a check for $1,446 from an offering taken by the Singing ChurchWomen West group at their concert in Purcell the week before.

Patterson said the city was blessed by the two days of volunteer service by the women, and they were a huge help.

Patterson, who has been Spring River’s director of missions for almost nine years, moved to Joplin from Henryetta, where he was DOM for North Canadian Association. He served eight years before that as pastor of Lindsay, First.

“I was at Lindsay when the May 3 tornado hit, and it was the worst one I’d seen until this one,” he said. “That one was awful, but this one, because it stayed on the ground for 32 minutes in a six-mile section of town, was devastating. It moved so slowly, and there were three tornadoes inside the body of the main tornado, so it worked like a garbage disposal grinding things to a pulp. I’ve never seen such destruction in my life, and I’ve seen a lot, because I’ve done disaster relief all over the world.”

Knowing they had been a help and blessing was enough for the women. One singer, Rickie Thompson, a member of Stringtown, First, discovered two weeks before that she has breast cancer, and will have surgery on Dec. 7.

Did she think about cancelling her trip to Joplin?

“No,” said Thompson, “This is more important.”