Three couples meeting challenges of taking Gospel around the world 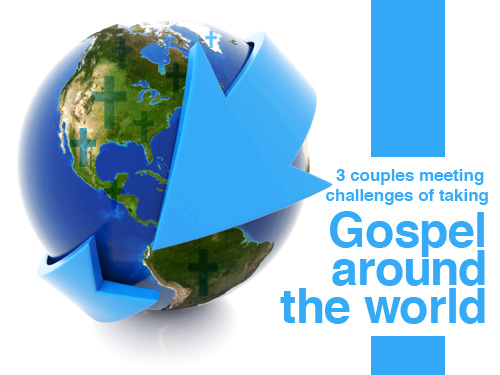 With millions of people around the world who have either never heard the name of Jesus, or who don’t understand His sacrifice for sins, the challenge of spreading the Gospel seems overwhelming.

Yet three missionary couples speaking to the Women’s Missions and Ministries Celebration at Moore, First Nov. 14, are devoting their lives to making a difference by sharing the Good News of Jesus from Mexico to East Asia to New York City.

Scott and Sherry Bennett have spent the last several years in Puebla, Mexico, a city of 3 million people 60 miles southeast of Mexico City, with only 4 percent who are evangelical.

“This is one of the most historically resistant areas to the Gospel,” said Scott Bennett. “There is a lot of poverty and need, and 3,337 neighborhoods without a church.”

Scott said their strategy of reaching the city with the Gospel by planting churches, evangelizing, discipling, mobilizing existing churches and beginning Bible studies in homes, has had to work in the light of several barriers to the Gospel.

“There is a lack of understanding of who Jesus is,” Scott said. “Catholics in Mexico differ from Catholics in the U.S. In Mexico they see Jesus as either a helpless baby in the arms of the Virgin Mary or as a man suffering on the cross (crucifix).”

Scott said there is also a lack of knowledge of God’s Word.

“Catholics are discouraged from reading the Bible,” he noted.

Another barrier is persecution by family and culture, he said.

“To be Mexican is to be Catholic,” he explained. “They reject their country and their heritage by becoming Christians.”

Yet, he said, the greatest barrier to the Gospel has also become the greatest bridge—going into homes to meet people and establish home groups by sharing Bible stories.

“We started three new cell groups and now have 22 home groups,” he said. The Bennetts will be moving to Mexico City, where only 2 percent of the population is evangelical, upon completion of their stateside assignment in January.

On the other side of the world, “R and A” are working with a minority group of 1.65 million people without any access to the Gospel.

“These people in East Asia live in small, isolated villages, where ancestor worship and superstition dominates life,” said R (whose name cannot be revealed because of security precautions). “More than 75 percent have not heard the name of Jesus, and those who have know it only in a historical light, not that He shed His blood for them.”

R explained that Jesus said He is going “to send you into every town, and to look for a man of peace.”

R said he walked into a small shop to buy paper and a pen, and noted something about the man running the shop.

“The next time I went to that shop, I told him my family moved here, and we are Christians,” R revealed. “The man said, ‘I’m Christian too, so we’re brothers.’”

R said he spent about a year going back to that shop, and found the owner had worked for a man from Canada who shared the Gospel with him. Although he rejected it at the time, he began to study religions and came to the conclusion that Christianity was the only religion who had a God Who was about love.

“I was privileged to baptize him, and we began a church in his shop,” R said. “After two years of sharing, his wife became a believer, then he led his brother and a friend to the Lord.”

R said there are 72 market towns in the area where he lives, and he believes if they can establish a gospel group in each town, the Gospel will spread.

On U.S. soil, Taylor Field has been sharing the Gospel in New York City since starting a storefront church, Graffiti, in the 1970s.

“God is teaching me that things have changed in the world,” he said. “Growing up in Enid, I remember seeing my first Asian and first African American people, and now they are all around me.”

“My son witnessed people falling from the buildings after the towers were hit by the planes,” Field said. “I was angry, but I realized there were Muslims all around, and I asked a Muslim taxi driver what it was like for him. He told me how uncourteous people were to him.”

He said the tragedy of 9-11 changed his whole family, and his son took a stand for God.

“God can take the worst and bring out the good,” he noted. “Things that are changing bring opportunities.

He revealed that when he flew into the Oklahoma City airport, and looked at the pictures of famous Oklahomans, his eyes rested on Ralph Ellison, who wrote The Invisible Man.

“There are invisible people all around us,” he said. “In Luke 14:13, Jesus tells us when we have a banquet, to look for those who are uninvited and can’t pay you back.”

Field told of a time when as a young man he went to Germany, and on Christmas Eve didn’t have anyone to be with.

“I decided to go to the roughest area in town and give beggars money,” he said. “But there were no beggars there. Even they had someone to be with on Christmas Eve. I asked the Lord to help me not forget what that felt like.”

Field concluded that, reading Deuteronomy 28:1, we realize that everyone has value.

“God’s goodness and promises are everywhere,” he said. “We just need the ability to see it.”

Paula Adams, a member of Oklahoma City, Quail Springs, was elected to her third term as State WMU president, and Sherry Wilkinson, a member of Blackwell, First, was re-elected recording secretary.