DALLAS (BP) — Messengers to the 2018 Southern Baptist Convention affirmed the dignity and worth of women, denounced all forms of abuse and called for sexual purity among Christian leaders in adopting 16 resolutions Tuesday (June 12). 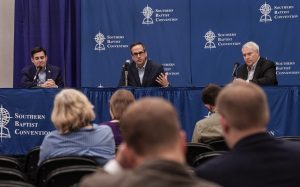 Passage of the resolutions on women, abuse and pastoral purity by nearly unanimous votes late in the afternoon session came after months of disclosures of sexual abuse and misconduct by male leaders had rocked Southern Baptist and other evangelical churches and institutions.

Adoption of the measures also came in the wake of the May 30 termination of Paige Patterson at Southwestern Baptist Theological Seminary following his alleged mishandling of the reported rape of a female student and criticism of his advice to a woman abused by her husband.

The resolution on women recognized May 15 as the 100th anniversary of female messengers to the SBC meeting and honored “the immeasurable contribution of women to our cooperative mission of Great Commission work.”

It also affirmed women’s gifts “in their distinctive God-assigned roles” and urged Southern Baptists “to encourage, cultivate, and celebrate the diverse gifts, callings, and contributions of women in biblically appropriate ways.”

The measure on abuse renounced “all abusive behavior as unquestionably sinful” and called for decisive action to report abuse allegations to law enforcement authorities. It also offered compassion to abuse victims, “being careful to remind the abused that such injustice is undeserved and not a result of personal guilt or fault.”

In the resolution on clergy purity, messengers repudiated actions that undermine the New Testament standard of holiness for Christian leaders and urged churches “to exercise appropriate redemptive church discipline” when needed.

While the subjects of these first three resolutions had some overlap, the Resolutions Committee — which received 38 resolutions, the most since 1997 — “determined to address each theme individually” because of the number of proposed statements it received, Chairman Jason Duesing told reporters afterward.

“It was clear to us that the convention wanted to speak to those themes,” and separate resolutions allowed the committee to meet that desire, said Duesing, provost and associate professor of historical theology at Midwestern Baptist Theological Seminary in Kansas City, Mo., and a member of Antioch Bible Baptist Church in Gladstone, Mo.

Russell Moore, president of the Ethics & Religious Liberty Commission, commented on the three resolutions by commending the Resolutions Committee “for strong, positive resolutions that address a crisis in our country and in our world right now.”

The resolution process not only speaks “to the outside world for the convention” but also serves “to help educate and equip” Southern Baptists, Moore said at the news conference. “And my hope is that these resolutions, as weighty and biblically crafted and worded as they are, would help to spark conversations and actions in local Southern Baptist churches and other churches about how can we best respond to those who are being abused.”

Messengers also continued to address racial reconciliation by adopting a resolution renewing the SBC’s “public repudiation of racism in all its forms,” including “the curse of Ham” teaching that God determined the descendants of this son of Noah would have dark skin and live in subordination.

In a measure on immigration, messengers again requested reform — as they had in 2011 — that secures the borders and proves a pathway to legal status “with appropriate restitutionary measures.” The resolution also calls for “maintaining the priority of family unity.”

— Affirmed the “full dignity of every human being.”

— Called for “caution and wisdom in our media and social media” communications.

— Encouraged government authorities to establish policies that would curtail gun violence while functioning according to the U.S. Constitution’s Second Amendment.

— Urged pastors and churches to be informed about the dangers of opioids and to minister to people impacted by opioid abuse.

— Pledged to pray for Arab Christians in the Middle East and around the world.

— Mourned the February death of evangelist Billy Graham, a Southern Baptist, and celebrated his life and ministry.

— Thanked God on the 100th anniversary of GuideStone Financial Resources.

— Voiced gratitude to God on the occasion of the 100th anniversary of New Orleans Baptist Theological Seminary.

— Offered thanks to God for 50 years of ministry through Southern Baptist Disaster Relief.

— Expressed gratitude to God, as well as Southern Baptists in the Dallas area and all others who helped with this year’s meeting.

Messengers also passed a multi-subject resolution that reaffirmed commitment to the trustworthiness of the Bible and “unswerving belief” in the one true God, continued to call for Southern Baptists to welcome refugees into their churches and homes, and urged church members to pray about adopting or fostering children.