Oklahoma City, Trinity reaches out to the homeless 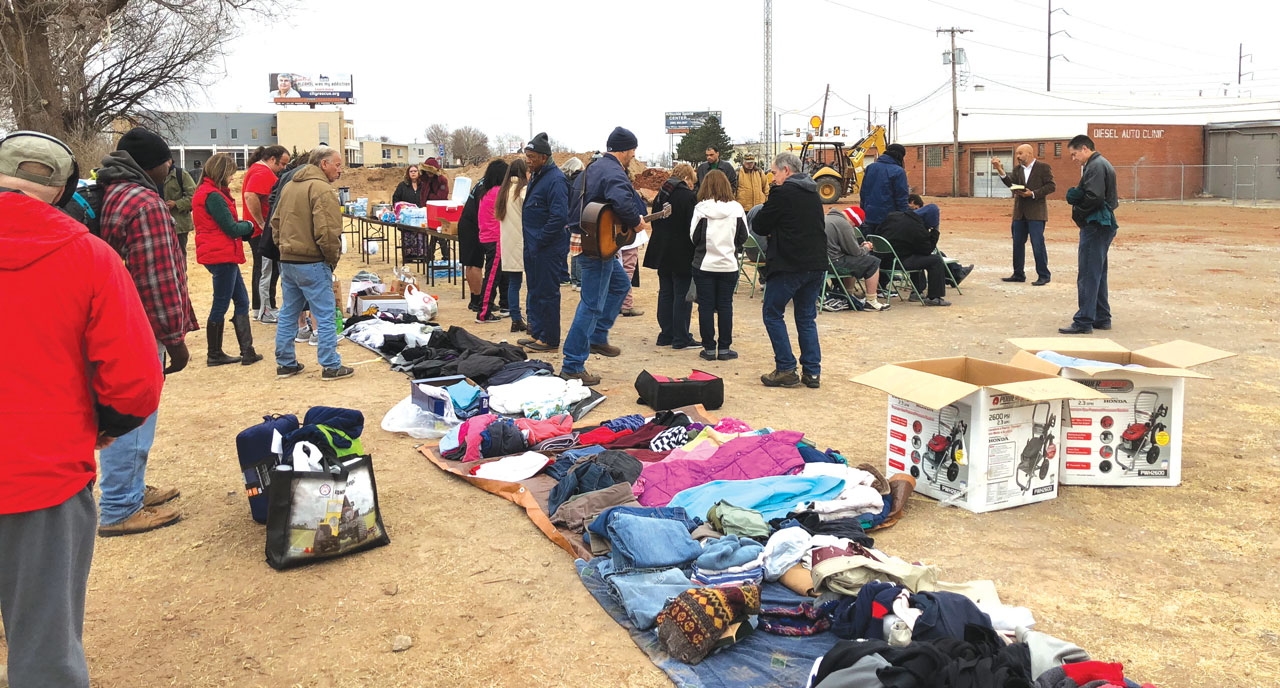 One does not have to drive far in Oklahoma City to notice the city’s homeless population. People are wandering in search of food and shelter and posted at many major intersections seeking help. Oklahoma City, Trinity is committed to helping them.

On a cold Sunday morning in December, Trinity members loaded donations of clothing and set out in search of an empty lot in the downtown area, where many of the homeless find a place to sleep. A hot breakfast was served and a worship service was conducted with Christmas carols and an encouraging message. 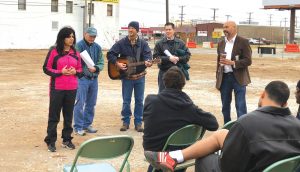 Mani Hagood, far left, along with leaders and volunteers of Oklahoma City, Trinity offer hope and encouragement to homeless.

An invitation was offered, and eight people responded, asking for prayer and making professions of faith. After the service, people could choose from a selection of winter clothes, coats, gloves and hats that were laid out on tarps on the ground.

The vision for the ministry began more than three years ago with Mani Hagood, a long-time member of Trinity. “I sat in my Sunday school class year after year taking in, and it was time for us to get out of the classroom and serve,” Hagood said.

The Sunday School outreach has grown to a quarterly event and now involves the whole church. The church was initially given basic instruction and training in how to engage people. The sharing of food opens up opportunities to not only hear the life stories of community members but also share stories of faith and trust in Christ. At least one Trinity member is asked to share the Gospel to the group at large each time they go out.

It is Hagood’s goal to improve the outreach each quarter by adding something to it. This quarter, each person who responded to the message was prayed over individually. Hagood emphasized that the primary purpose is to see people come to Christ.

“Trinity’s outreach ministry to our Oklahoma City homeless community has been, and will continue to be, an integral part of our ‘DNA’” said Pastor Tobin Jackson of Oklahoma City, Trinity. “God continues to provide opportunity to show love and share the Gospel of Jesus Christ each and every time we join together in this kingdom work. I’m truly thankful for all of our members who give of their time and energy toward this ministry.”

The Oklahoma City Planning Department’s Housing and Community Development Division reported, “In January 2017, there were 1,368 people identified as literally homeless in Oklahoma City. It is estimated that a community’s annual number is four to five times its one-night census, in this case between 5,472 and 6,840 people in a year.”

According to a U.S. Department of Housing and Urban Development report in Dec. 2017, the state’s homeless population has grown in the calendar year, mostly due to the sharp increase in homeless families with children. Oklahoma has increased efforts to house veterans and chronically homeless which includes those with disabilities, who have been homeless for more than a year or have had four or more episodes of homelessness in a year.

It’s Hagood’s hope that other Sunday School classes will catch the vision to reach outside their walls and put into action what they have been learning about year after year.

Velvon Madison, who shared the message at that cold December event, said of the serving experience, “When participating in something like this, you actually get blessed more than those you are blessing. But if you never do it, you’ll never know it.”