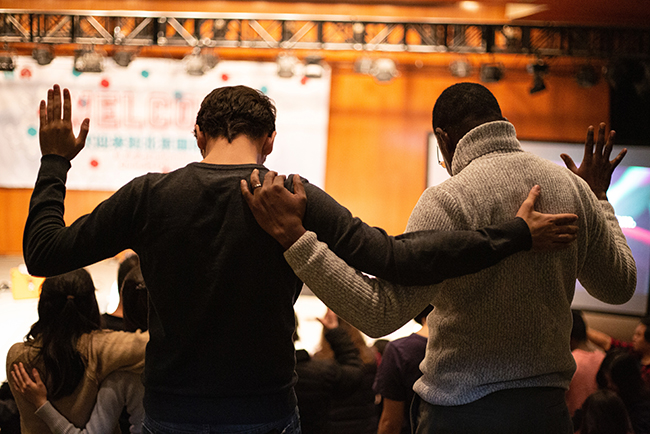 NASHVILLE (BP)—Most Protestant pastors say every church should strive to achieve racial diversity, but few are achieving it. 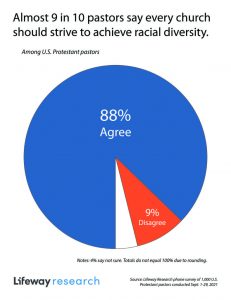 A new study conducted by Nashville-based Lifeway Research surveyed 1,000 Protestant pastors to learn their views on race and racial reconciliation in the church. The findings reveal some gaps among churches, including the difference between what pastors say they want for their churches as far as racial diversity and what their churches actually look like. There are also differences between what African American pastors are doing to lead their churches toward racial reconciliation and what steps white pastors are taking toward this end.

“For years, pastors have expressed a desire to have more ethnically diverse churches,” said Scott McConnell, executive director of Lifeway Research. “So every few years we want to check in on the progress they’re making toward achieving that goal.” 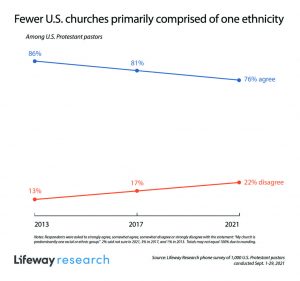 Churches aren’t often racially diverse. Most Protestant pastors in the United States say their churches are predominantly one racial or ethnic group (76 percent). There has been some progress over the past five years, however, as more pastors say there is at least some racial or ethnic diversity in their churches today (22 percent) than said so in a 2017 Lifeway Research study (17 percent).

Despite the reality that most churches are made up of predominantly one racial or ethnic group, most pastors think racial diversity should be a goal for their churches.

Today, 88 percent of Protestant pastors say every church should strive to achieve racial diversity. That’s a noticeable decrease from the 93 percent who said the same in 2017. This drop is seen most clearly when looking at the number of Protestant pastors who strongly agree that every church should strive to achieve racial diversity. Whereas 80 percent of pastors strongly agreed with this statement in 2017, only 68 percent strongly agree today. At the same time, there was an increase in pastors who somewhat agree from 2017 (13 percent) to 2021 (20 percent).

“The peak of pastor aspiration for more racial diversity in churches was measured just days after a white supremacist rally in Charlottesville, Va., in 2017 where clashes with opponents ended in deaths and injuries,” McConnell said. “While such events that year reminded pastors of the need for progress on racial reconciliation, there remains a consensus among pastors that this unity should be seen within their churches each week.” 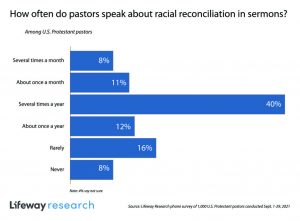 Perhaps one reason pastors care so much about pursuing racial diversity in churches is that they recognize racism as a threat to the church today much like it was a threat to first-century churches when the apostle Paul frequently addressed divisions between Gentile and Jewish Christians.

With recent rises in conversations surrounding Critical Race Theory (CRT), one may expect it to be a larger concern than racism for pastors; however, more pastors (48 percent) say racism is the bigger threat to the church in the U.S. today than CRT (29 percent). Another 16 percent of pastors say neither is a threat to the church, while 6 percent aren’t sure. 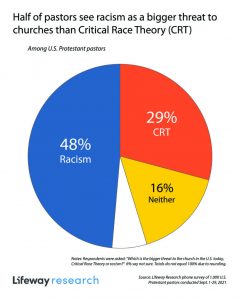 “Attitudes, cultural traditions and friendships within the community do not change by themselves,” McConnell said. “If someone doesn’t call for change, it won’t happen. Most pastors are casting this vision, but about a quarter of pastors aren’t.”

More than any other group, African American pastors (97 percent) see the need for racial diversity within the church, and they want to see the church striving to achieve such diversity. Meanwhile, 87 percent of white pastors and 83 percent of pastors of other ethnicities say the same.

African American pastors are also the most likely to say they preach on racial reconciliation several times a month (21 percent).

Not only do these pastors want racial diversity within churches, but they also see racism as an acute threat to churches. African American pastors are the group most likely to select racism (74 percent) and least likely to select Critical Race Theory (15 percent) as the greater threat to the church in the United States today.

“Nobody expects the color of churches to change overnight, but the appearance of more integrated churches is just barely noticeable over the last decade,” McConnell said. “The hard work of investing in relationships across ethnic lines and setting aside attendees’ cultural preferences to welcome others is still the exception.”

The phone survey of 1,000 Protestant pastors was conducted by Lifeway Research Sept. 1-29, 2021, using a stratified random sample drawn from a list of all Protestant churches. Quotas were used for church size. Each interview was completed by the senior or sole pastor or minister at the church. Responses were weighted by region and church size to reflect the population more accurately. The completed sample is 1,000 surveys.