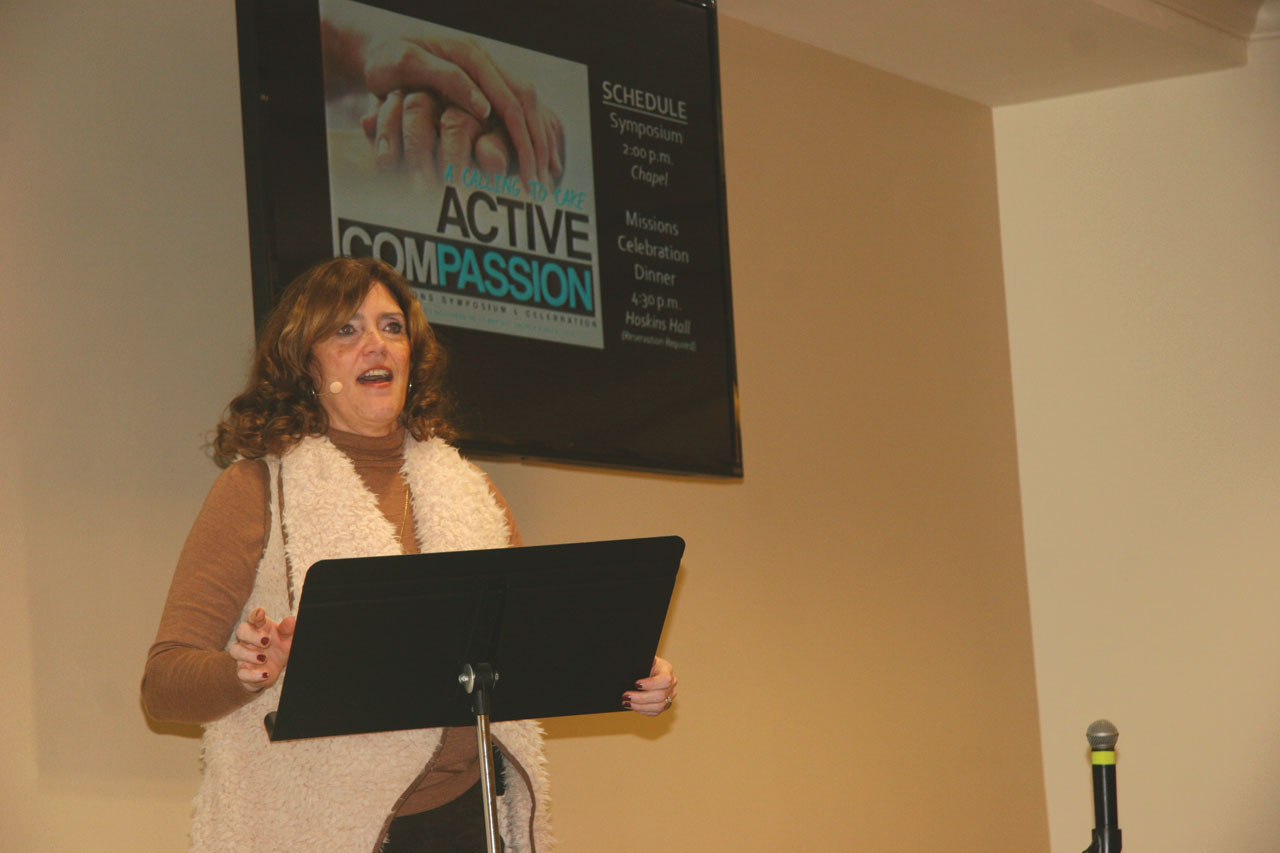 Stories about an encounter with an alligator and wall-to-wall Filipinos put current and retired missionaries in a laughing mood during the Missions Celebration Dinner at Oklahoma City, Southern Hills Nov. 9 before the opening session of the Baptist General Convention of Oklahoma (BGCO) annual meeting.

Gayla Parker, former missionary to the Philippines and women’s specialist for the Maryland/Delaware Convention, who is now executive director for the Arkansas WMU, spoke to the missionaries about her ministry experiences, using the story of the paralytic brought to Jesus by four friends as her text.

She said when she and her husband took their three young boys and moved to the Philippines, she had high expectations, and one of the first things she did was throw a Christmas party for Filipino pastors.

“When you invite Filipinos to a party, they bring all their family and friends,” she said. “I also didn’t realize they would begin to show up the day before the party. No one wanted to miss, so a steady stream of people began filing into our house a day before the party. It got dark early, so they started going to sleep. We ended up with 142 people in our little house, asleep everywhere but our bedroom. The next day, they decided to have a prayer time, and they prayed and prayed and prayed. By this time it was dark and they can’t travel after dark, so they stayed another night.”

She said she had recently received a bag of M & M’s and a bottle of Dr. Pepper from the U.S., and there was no way she was sharing those precious items. Her husband brought them to their bedroom, and said, “If they can’t see them, we don’t have to share.”

“That was the most romantic thing my husband has ever done,” she shared.

She said when she reads the story of the paralytic being lowered through the roof to the feet of Jesus, she sees her houseful of Filipinos.

She said the story means so much to her because of her experience when the family returned to the Philippines after their first stateside assignment.”

“After furlough, our house wasn’t ready, so we stayed with a missionary family, then our house was hit by a mudslide, and we lost a baby,” she related. “While unpacking a box, I began to experience back pain. I took a hot shower to ease the pain, but passed out and when I woke up, I was numb from the waist down.”

She said doctor after doctor told her “it was real bad.” Eventually she was transported on a stretcher back to the U.S., where she had surgery on a calcified disc which had ruptured into her spinal cord. Afterwards, she could feel her legs and wiggle her feet, and six weeks later, walked into the doctor’s office.

“The reason for that, I believe, was the 142 praying Filipinos who gathered around the plane bringing me to the U.S.,” she said. “That’s why Mark 2 means so much to me.”

She said we can learn from the four men who carried their friend to Jesus.

“We have to get to know people and meet them where they are,” she said, revealing that a young girl in her school kept inviting her to church, finally encouraging her with the words, ‘There are cute guys in our youth group.’

“She met me where I was,” Parker explained. “When I went to church, I didn’t notice the cute guys, I noticed the joy the people had, and I wanted it. I found they had a relationship with Jesus, but someone had to take an interest in me.”

She said the four men were willing to adjust, change their plans and act in urgency to get their friend to Jesus.

“We need to act now because Jesus is coming back. The friends had to lay the paralytic at the feet of Jesus and leave him. Once they laid him down, the miracle happened.”

And about the alligator. Parker said God has a sense of humor, because at a point of great stress in her life, she encountered an alligator in a Piggly Wiggly store. After staring each other down, the alligator turned and left.

“I laid down on the floor and laughed,” said Parker. “All my stress was gone.”