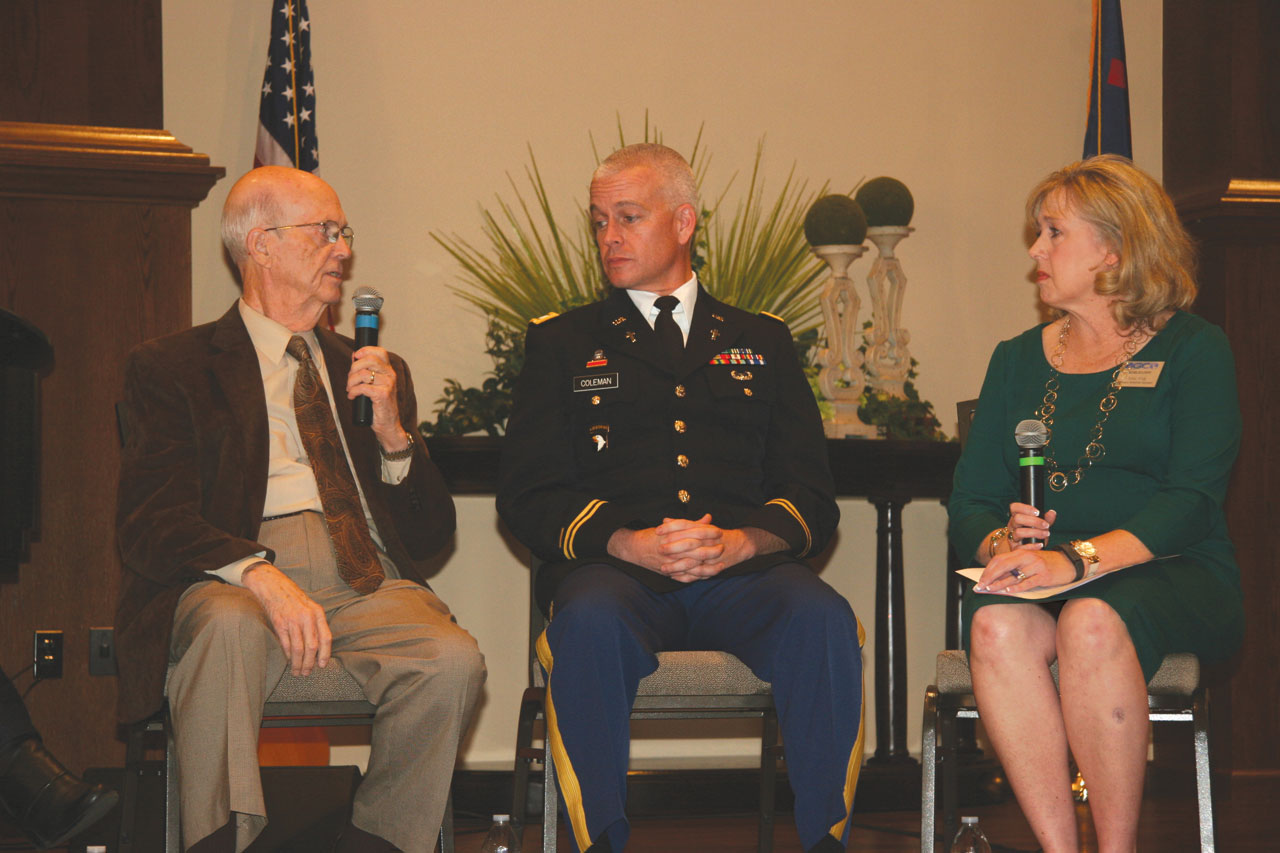 A soldier may see a bag on the side of the road. A missionary may hear a gunshot from a vacationing hunter. For most people these would be normal events and would not cause a reaction. But for the soldier who has seen a bomb go off from a similar bag, or the missionary who has seen a fellow colleague downed by gunfire, these incidents remain a part of their lives as many of them develop something called Post Traumatic Stress Disorder (PTSD).

“You never know what is going to push you over the edge,” Capt. Michael Coleman told those attending the Mission Symposium and Celebration at Oklahoma City, Southern Hills Nov. 9.

Coleman, who said he suffers from PTSD, told the group that PTSD is normally an accumulation of things, layers upon layers of happenings.

“I was not aware of the baggage I was carrying,” said Coleman, who admitted growing up in a home where expectations were high. “Stress and fear caused the cracks in my life to widen.”

He said one in four women and one in 10 men suffer from PTSD.

“You may not know they have it,” he said. “They are good at covering up, at hiding it.” He added that PTSD is not a disease, something you can catch.

“It is a normal response to an abnormal situation,” he explained. “Most people have experienced some kind of trauma. Some live with it, but have been able to manage it. Every now and then stress not dealt with develops into the disorder. It is not necessarily curable. You can’t throw a pill at it or deal with it in therapy. It’s like when you lose a leg, it can’t grow back, but you learn to run in a different way.”

Coleman said the event that pushed him over the edge happened in Afghanistan around a Muslim holiday.

“We were targeted by indirect fire,” he recalled. “The only difference between life and death is where you happen to be. The wrong place to be that night was at a bus stop filled with soldiers. It was my first experience with that level of death.”

He said he grew up in church where Jesus was never dirty, the manger didn’t smell and Easter was a cross with lilies.

“But I slipped into a depression that became deeper and deeper,” he revealed. “I continue to deal with that today. I have a difficult time around crowds. Church is hard. I don’t like ‘meet and greet’ time. I don’t want to shake hands. Leave me alone.”

Coleman said there are several things Christians can do to help those with PTSD.

“First, we need to be informed enough about PTSD to be helpful,” he pointed out. “It is a fear-based response, and until you can break the cycle of fear, it happens over and over again.”

Second, he said, affirm sufferers as valuable individuals. “They are God’s creation, but have experienced something ungodly,” he said. “They are questioning their self-worth, so honor this and show them respect. Don’t think you can fix it. Only God can fix it. Don’t label them, don’t be afraid of them.”

Third, ask what they need and how you can help. “Maybe it’s taking them to a doctor’s appointment, or helping with child care,” he noted. “It might be a hug. Embrace them and get to know them.”

And finally, he emphasized, when they are ready, and only when they are ready, talk to them about what they are going through in relation to God. “They have a serious problem dealing with their situation and a loving God,” he said. “Some are not ready to go there yet. Get to know them so you’ll know when it’s the right time to bring up God.”

“Ministering to people who are hurting is a privilege,” Coleman concluded. “I see my experience as a privilege because I know what my soldiers are going through. God built the church so there would be a place for hurting, lost people to go. Care for them. Give them a non-judgmental shoulder to cry on. Our pain will be taken care of—we have salvation that is the ultimate cure. For some, however, relief is only going to come when they walk through the gates of Heaven.”