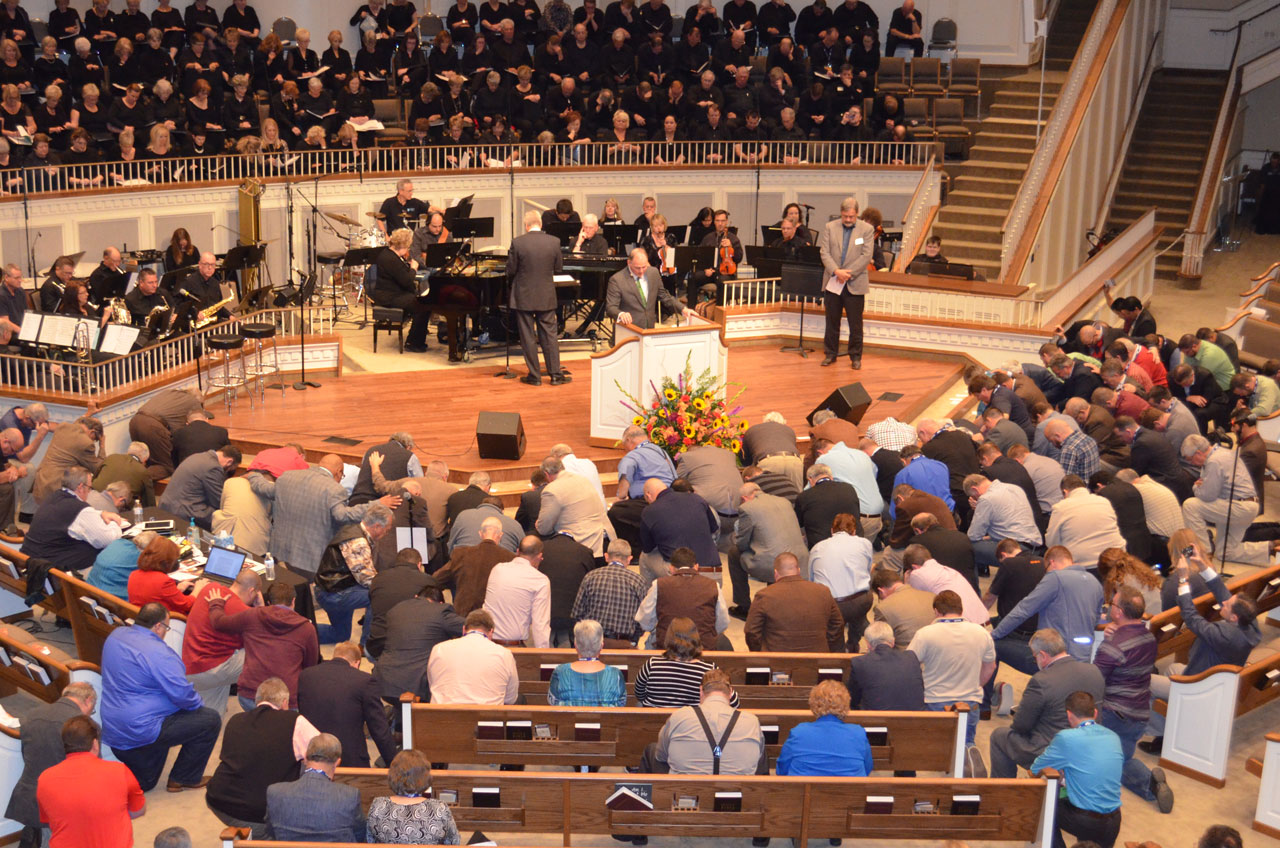 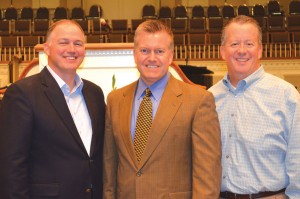 An emphasis of sharing the Gospel was made throughout the reports, presentations and addresses at the 109th Annual Meeting of the Baptist General Convention of Oklahoma (BGCO), Nov. 9-10, at Oklahoma City, Southern Hills.

With 621 registered messengers from state Baptist churches, along with numerous guests, the attendees were charged by the Annual Meeting’s theme “Connect>1.”

Mayfield and Napier emphasized the importance of churches evangelizing through the Sunday School or small groups organization of the church body.

“How many of you would like to baptize more people in 2016 than you baptized in 2015?” asked Mayfield. “We are excited about this. We want to see more people, just like you do, come to Jesus Christ. What would you do if you could discover a plan to engage more church members to share with more lost people, to create more gospel conversations to bring more people to Jesus?”

Mayfield then asked Napier if there was some kind of organization already in the church that might be utilized to incorporate such a plan.

“Bob, that’s a no-brainer,” Napier said. “It’s Sunday School or small groups or whatever your church already has… It’s already there. It’s already in place. You don’t have to go back to your church and create something.”

Both Mayfield and Napier emphasized a strategy for 2016 called the “3151 Challenge.” This challenge involves the following: Over a six-week time frame, beginning next October, each person in a Sunday School small group prays for three lost friends, learns one Gospel presentation, invites five people to their small group and shares the Gospel with one person.

Mayfield said this emphasis will be presented next year in LifeWay Christian Resources’ Bible Studies for Life curriculum for Sunday School. Blake Gideon, pastor of Edmond, First, gave a message in support of the “Connect>1” emphasis.

Preaching from I Cor. 2:1-2, Gideon said, “The Church is to be militant. And our weapon is the Gospel of the Lord Jesus Christ… It is the hope for our country. We can’t vote our way out of the situation we’re in, but we sure can evangelize our way out of it.”

Gideon’s sermon led to a prayer time, which prompted pastors and church leaders to come to the front altar and pray for their respective churches to commit to sharing the Gospel next year.

A brief report also was presented in the Monday evening session about BGCO Conference Centers. Andy Harrison, Falls Creek program director, emphasized the spiritual decisions made, including salvations, in spite of the summer schedule that was affected by a major flood in June. CrossTimbers program director Glenn Barber highlighted salvation stories, as well as record-breaking attendance numbers for the camp’s summer weeks. 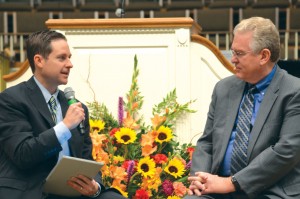 Dilbeck gave the presidential address based on Mark 1:14-15, titled “After John was put in prison.” Dilbeck compared the imprisoning act of John the Baptist to present day with the “overwhelming culture change,” and said we should respond how Jesus responded after John was arrested.

Highlighting the session was the announcement of BGCO’s commitment to partner with mission leaders in the country of Latvia. Peteris Sprogis of the Latvian Baptist Union and Anthony Jordan, BGCO executive director-treasurer, signed a formal written agreement to a three-year commitment of Oklahoma Baptists serving in Latvia (see page 5 for more information).

Brian Hobbs, Baptist Messenger editor, and Jordan participated in a Q&A session that had Hobbs offering questions on relevant issues for Oklahoma Baptists.

Jordan, in his annual address, set the tone for the rest of the day by asking those present, “What breaks your heart?”, then listing some areas which grieve his own.

The executive director-treasurer bemoaned the “10,000 children in the custody of the state of Oklahoma,” issuing a challenge to pastors and churches to “step up to the task” of providing foster homes and adoptive parents for those children.

“Oklahoma Baptists can make a difference,” Jordan stressed, as he announced an initiative to provide 500 foster care homes through a joint effort with Oklahoma Baptist Homes for Children.

“We will be in the middle of this, and the loudest voice will be mine,” said Jordan, who, along with his wife, Polla, raised two adopted children.

Secondly, Jordan said, what breaks his heart, are people who don’t have a relationship with Jesus, referring specifically to Native Americans, Hispanics, who now make up the second-largest population segment in the state, and 200,000 college students.

Sam Porter, BGCO Partnership Missions specialist, led a report on BGCO continuing its partnership with the Guerrero Baptist Convention in Mexico (see page 5 for more information). Mark McClellan, dean of the Robert Haskins School of Leadership and evangelism specialist, translated for Luis Gomez, executive director of the Guerrero Baptist Convention, who shared they well surpassed their goal of church plants, which was to have 25 churches by 2010 and 15 more by 2015. Currently, there are more than 50 churches in Guerrero.

Sam Dyer concluded the Annual Meeting with the annual sermon. The pastor of Heavener, First gave personal stories of evangelism that had attendees laughing and inspired. His sermon also led to a time of prayer, as he asked pastors to come forward to pray for lost people at the altar.