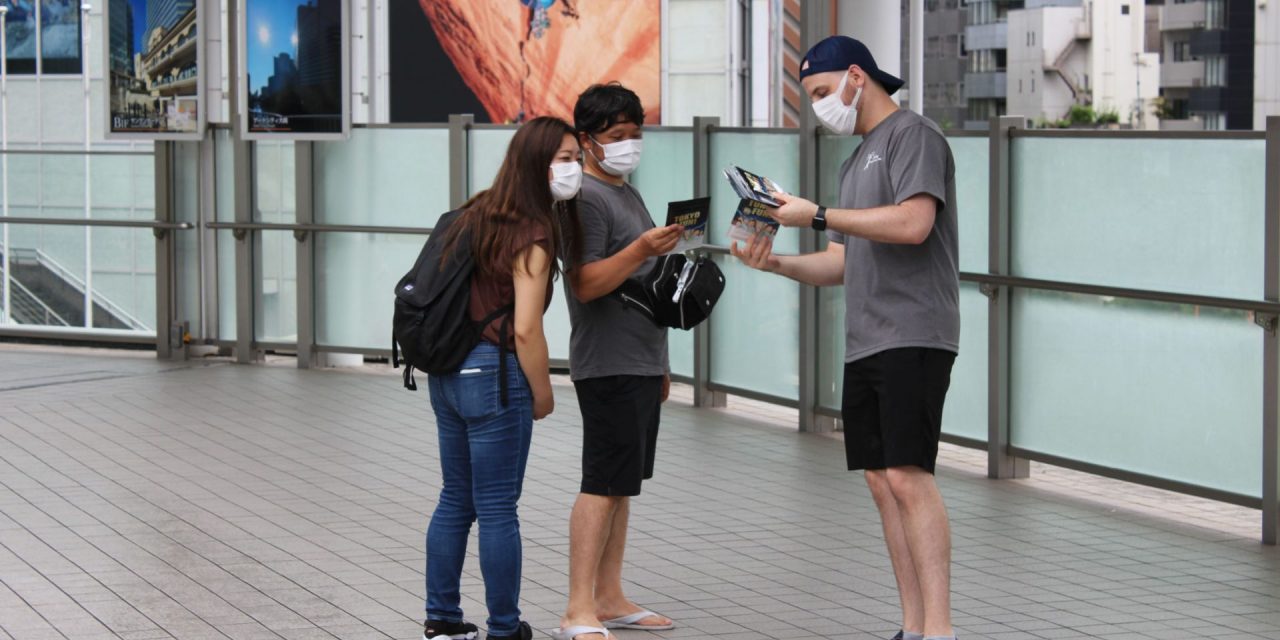 TOKYO (BP)—A Buddhist priest learned about Jesus through Japanese comics. A worker from the Olympic village heard what is worth more than gold. A Christian woman struggling to find a church learned about ones she can attend. An athletic trainer ran to tell his friend how he could be rid of sin. A 93-year-old woman welcomed prayer from International Mission Board (IMB) missionaries and Japanese Christians. 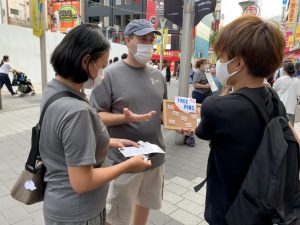 Zach Jones, center, and Hiromi Price, left, share the Gospel with a man using an Olympic trading pin their IMB missionary team designed to share the Gospel using the colors of the Olympic rings to bridge to the Gospel.

As athletes soared over high-jump bars, balanced on beams, freestyled to gold medals and climbed to new heights, missionaries in Tokyo participated in 22 ministry events in 18 days. These activities included distributing Christian Japanese comics, offering English practice outside subway stations, dressing in cosplay, prayer walking, sharing the Gospel on thoroughfares and praying while riding on trains.

Missionaries interacted with 1,000 people, and nearly every person left with gospel material and trading pins designed to share the Gospel. One hundred fifty people had spiritual conversations, and another 100 people received an entire presentation of the Gospel. 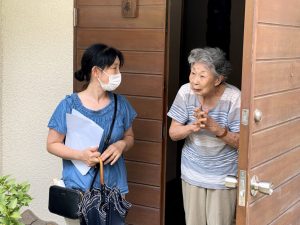 A 93-year-old woman greets IMB missionaries and Machiko, the wife of Shinagawa Baptist Church in Tokyo. The Christians prayer walked through the woman’s neighborhood and stopped at her house to pray for her. The woman was very receptive and missionary Cornelia Walker talked to her after prayer. Fellow missionary Hiromi Price plans returning to visit.

As the megacity empties of athletes, coaches and commentators, Japanese men, women and children will continue living, breathing and dying – many now with the knowledge of God and access to Christians and churches they didn’t have before the Olympics.

Ministry in Tokyo will continue long after the closing ceremony. Scott and Julie Bradford, Pierce and Yae Hite, Natalie Nation, Kacie Kubosumi, Hannah Miller and other missionaries plan to meet up with students they met through in-person and virtual outreaches.

“Are you going to have another event like this?” one of the students asked after an English outreach. “I study a lot alone, and I do not have very many interactions with other people, and I was so happy to be able to talk to people today. Thank you.”

Pierce shared with an older Japanese woman during an outreach in front of a train station where he and other missionaries were handing out trading pins they designed for the Olympics. The woman had lived abroad and told Pierce she believed that all religions were good.

“I explained to her what the grace message is,” Pierce said, “that Jesus Christ came, He paid that penalty of sin and death, but then He resurrected, and it gave us a chance to be reconciled to God if we received that. I asked her, ‘Do you see that message of grace in any other religion that you have encountered?’”

She paused to think, and said, “No, that’s not in anything else.”

The woman left with much to think about, and Pierce prays that she will choose to follow Christ.

Missionaries exchanged contact information with dozens of people they met during 5-Minute English outreaches and will be following up with them. One of the contacts is a businessman who was eager to study the Bible. Natalie Nation and Tara Rice hope to follow up with a physical trainer interested in hearing more about grace and a woman who realized her understanding of Scripture wasn’t holistic or accurate.

During one of their outreaches near the Nakano train station, missionaries met Japanese Christians who were encouraged to see people sharing their faith and other Christians looking for churches to join. Missionaries invited a Chinese woman they met to the churches they attend. As tears streamed down her face, she told the missionaries she has been in Japan for roughly seven years but hasn’t connected with a church.

A 93-year-old woman will receive another visit from missionary Hiromi Price and Machiko, the wife of a Japanese pastor. The women and other missionaries prayed and talked with the woman during a prayer walk through her neighborhood.

Japanese Baptist churches will continue to engage their communities with the Gospel and trust the hours spent in prayer will lead to the Lord moving and working in mighty ways.

Carlton Walker and other IMB missionaries, Japanese Christians, pastors and missionaries from other organizations will continue to ride around and around on trains, blanketing the city of 38 million in prayer. After one of the prayer rides, Walker and other missionaries invited people they met to future outreach events. The invitation stands for Christians to attend virtually.

Bradford said the activities missionaries took part in during the Olympics are evergreen and will be utilized in the days and months to come.

“A year ago, the Tokyo global city team had high hopes and big plans for the Olympics,” Bradford said. “COVID-19 and many changes led our team to constantly revisit and make adjustments along the way. As a result, we still made plans in faith that God had something in store for our team during the Olympics.”

Southern Baptist support makes it possible for missionaries to minister among the Japanese.

“Thank you for your gifts to the Lottie Moon Christmas Offering and the Cooperative Program, those things have enabled us to be able to be here in Japan, to represent you and to make Christ known,” Bradford said, adding his team would welcome future volunteers to serve alongside them.