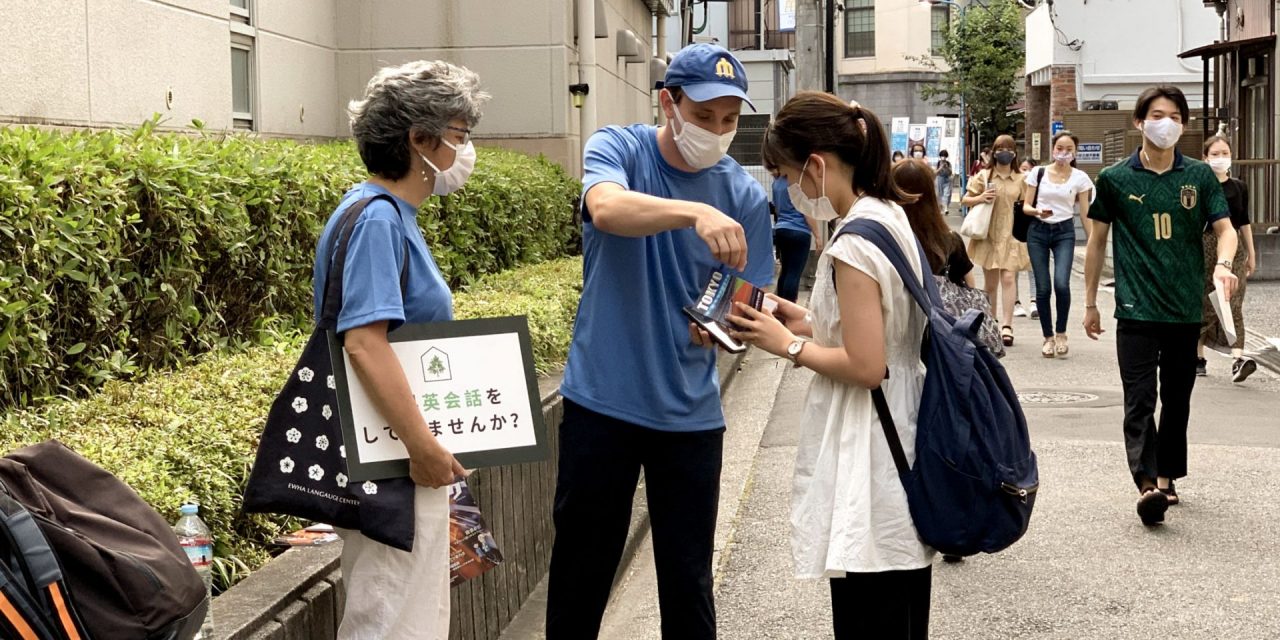 TOKYO (BP)—Dozens of Southern Baptists across the U.S. planned to travel to Tokyo for the 2020 Olympics to serve alongside International Mission Board (IMB) missionaries and Japanese Christians.

Hopes lingered throughout the summer, but borders remain closed.

But even though mission teams were unable to go to the Games, IMB missionaries are already there. They’ve been in Japan since 1888. During this Olympic season, they are actively sharing the Gospel in a country where 99 percent of the population doesn’t know Jesus. They are ready to serve because Southern Baptists have made a commitment to reach the nations—to have missionaries on the ground, ready to be used by God.

Southern Baptist missionaries in East Asia are partnering with Japanese churches and Christians to share the Gospel by riding on subways, trading English pins and evangelistic materials, prayer walking and offering opportunities to practice English. 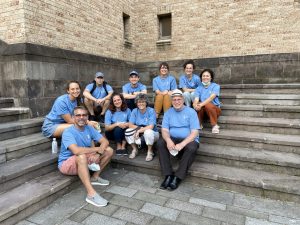 Using a mobile cart sporting an Olympic flag, IMB missionaries, in partnership with Japanese Christians, shared the Gospel and passed out Christian material to 340 people in two days before the games.

In partnership with Tokyo Baptist Church and other Japanese Christians, missionaries planned to host a pop-up coffee house during the 2020 Olympics as a way of meeting people, but due to COVID-19 restrictions, this was no longer possible.

Instead, IMB missionaries Scott and Julie Bradford decided to try a mobile cart, similar to a food vendor stall, as a way to make connections. The Bradfords and several team members were invited to the city of Okayama to support a local believer and his church’s ministry efforts using the mobile cart.

Praise music played from speakers as footballs spiraled and frisbees sailed through the air, attracting the attention and interest of shoppers, commuters and others passing by. Several of the team members and partners from the local church rode an orange tricycle around the area, gathering attention and striking up conversation.

The IMB missionaries and Japanese Christians offered iced coffee, green tea and water while passing out tracts and materials stored in the cart’s drawers.

“We are praying that the people who received the materials, who engaged with us in communication, will take a look at those things that we shared with them,” Scott said.

The local church will follow up with the contacts they made during the two days.

Near the entrances of busy subway stations and other highly trafficked areas, IMB missionaries are holding up signs that say, “Free English conversation.” 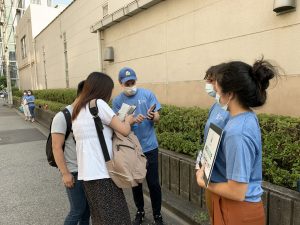 University students and young professionals flow past, some stopping to take advantage of the chance to practice their English for a few minutes before moving on to the busy streets or into the underground tunnels that connect the megacity.

Missionaries call this ministry “5-Minute English,” and it is one of the outreaches they are using during the Olympics.

“5-Minute English is a great way to connect with many different people in a short amount of time and begin to build relationships, so that we can filter them down to those that are interested in the Gospel,” said IMB missionary Pierce Hite.

The missionaries are exchanging contact information and making plans to meet up with those interested in connecting again.

On their first Olympic outreach day using 5-Minute English, Jeff Loomis, also an IMB missionary, said the team handed out 45 pieces of Gospel material and talked with 29 people about the Gospel.

Amid the masses in Shibuya, the world’s busiest intersection, with more than 2.4 million people crossing in a day and with as many as 3,000 people crossing at a time, the Bradfords and IMB missionaries Rick and Hiromi Price will be trading Olympic pins and Christian manga, wildly popular Japanese comic books and novels.

Though volunteers are not able to physically visit Japan, many are virtually visiting. In June and July, IMB missionaries hosted virtual mission trips that connected Southern Baptists directly with Japanese people via Zoom.

As the world’s collective eyes followed the Olympic torch to the island nation, Christians from across the U.S. and the world participated in a virtual Olympic kickoff where they partnered with IMB missionaries Pierce Hite, Kacie Kubosumi, Natalie Nation, Andrew Pina, Colton Dowdy and Carlton and Connie Walker. During the event, Japanese students heard the Gospel through personal testimonies and the story of Olympian Eric Liddell. An in-person meet-up will take place on August 7 with those interested in hearing more.

In the days to come, IMB missionaries, as part of a larger inter-denominational group, will board a train that makes 30 stops in a circular loop around the city and will pray for specific prayer requests that correspond to the neighborhoods at each stop.

Taking the streets on foot, missionaries and Japanese Christians will pray for communities, businesses, universities and shopping malls during the Olympics.

Bradford said Southern Baptists have remained committed to partnering with them in the task of reaching the Japanese.

“Man would never have been able to predict what has unfolded during this worldwide pandemic and the impact it would have on the Olympics and the world, but because of the faithful giving and support of Southern Baptists, we are able to have boots on the ground to continue to carry out the work that God has called each of us to do,” Bradford said.

The IMB is counting on your presence—your presence before the Lord in prayer—and your physical presence in Japan in the future.

“They faithfully give to have us here and continue to support us through their fervent prayers,” Bradford said of Southern Baptists. “Thank you so much for being our rope holders. We need your continued support, encouragement and eventually, when the borders open, we will need your presence.”

For such a time as this

The IMB’s first missionaries to Japan perished when their ship was lost at sea in 1859. Missionaries finally made it to the island in 1888, and Southern Baptists have continued to have missionaries there serving through two world wars and now a pandemic.

The Gospel will not be deterred in the “land of the rising sun.” IMB missionaries will take every opportunity to continue carrying the torch bearing the Good News of Christ.

Give to support the work of the Olympic ministry team: imb.org/give/project/tokyo-summer-olympics-ministry