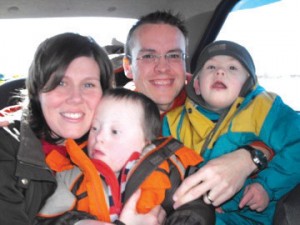 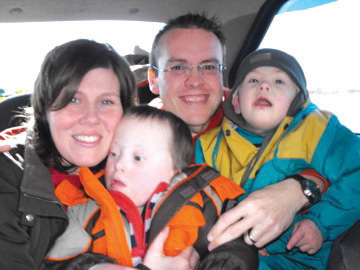 Chris Malone has made 14 trips to Ukraine with Ukraine Ministries of Oklahoma working with pastors in evangelism. On one of those trips, he had an opportunity to visit several orphanages, one of them for special needs children. And that’s when his life changed forever.

Chris, minister of music at Moore, First, said the people of Ukraine stole his heart, and after his first trip, he didn’t want to go home.

Then he visited the orphanage and discovered what happened to children with special needs. Once they reach the age of 5 or 6, they are moved to a mental institution. Few of them survive the first year there.

“When I found out what happens to these kids, all I could do was weep,” Chris admitted. “I sat in the kitchen of a friend in Vishneve and cried like a baby. I couldn’t even speak.”

Traveling home from that trip, Chris said he had a “vision” of his future life.

“It was of our family having a private home for Ukrainian orphans with special needs, specifically Down Syndrome,” Chris revealed. “I assumed this would be in Ukraine.”

Chris made plans for his wife, Mary, who God had been preparing for major changes in their lives, to go to Ukraine with him so they could stake out a place to live and meet with people about what kind of ministry they could have there.

The Malones, at the time, were parents of five children, and the youngest, Eli, now 5, has Down Syndrome.

“I will never forget that first trip to the orphanage and seeing kids like my son waiting to die,” said Mary. She said parents there don’t take disabled children home from the hospital.

Mary noted that disabled children in the United States have people to give them therapy and a support system. They are also more accepted, but in Ukraine, they are shut away.

For the next couple of years, the Malones continued to move forward with plans to move to Ukraine.

“Then one day, God said, ‘Stop and wait on me,'” Chris said. “At the same time, Mary and I began to have strong desires to have more children. However, we became discouraged when we discovered some medical problems prevented that.”

When the couple went to Ukraine in July 2008, they said they knew they were going to do something with special needs kids.

“It’s expensive, but God showed us we weren’t going to have to do it ourselves,” Chris said. “He provided contacts and a free place to stay. When we returned home, we had our answer. God wanted us to adopt.”

The Malones immediately started the process of home studies, paper work and fund raising. They needed $30,000, and God provided.

“I went in to work several times and found money on my desk,” Chris said. “And once Mary was handed a sack with 10 $100 bills.”

Two children were recommended to the Malones by Reece’s Rainbow, an international Down Syndrome Adoption Agency out of Maryland. These children were at the age to be transferred to a mental institution.

When the Malones got to Ukraine in February of this year, Micah, 5 1/2, was already in the mental institution with 80 other children.

“We can’t describe the stench, the screaming and moaning,” said Mary. “There wasn’t enough food, and Micah was out of control.”

It is no wonder. The deformed, immobile and helpless boys have been abandoned by the world. The boys are given no education, no trips off the orphanage property, and no physical touch except as punishment.

It was not a good visit, the Malones said, yet they knew they could not leave Micah in that place. They knew God wanted them to have him.

When the Malones met their other son, Matthew, 6, they were told he was deeply mentally delayed.

“When he reached over and gave me a long, hard hug around the neck, I was breathless,” said Chris. “He is not deeply mentally delayed; he speaks some, is almost walking and uses a spoon to feed himself.”

Now that the boys are home, and the Malones are parents to three Down Syndrome sons, ages 5, 5 1/2 and 6, they say they have challenging moments, but without them, there would be a void in their lives.

The Malones say it is good for Eli to see the other two boys doing things.

“Eli has opened up in different ways,” said Mary. “He desires our attention more since he sees Matthew and Micah wanting our attention.

“Matthew and Micah have blossomed and have shed many of their ‘institutional’ behaviors. They have opened their hearts to all of us in ways we didn’t think could happen so quickly.”

Mary added that the children were dealing with orphanage issues, not their Down Syndrome.

“They never had the physical touch or the love of a mom and dad,” she said.

Chris and Mary said their four older children, Blake, 15, Hannah, 14, Bethany, 9, and Seth, 7, are accepting to the new members of the family and feel this is what God wanted the family to do.

“They told us we should adopt a kid that really needs us,” said Mary. “We can’t put a price tag on what this has done for our children.

“I have loved watching my children develop a heart for orphans. They talk about how they could see us adopting again. Blake has reminded me several times that we have room in our van for three more.”

The Malones added that the whole process also has been good for their church.

“They’ve watched us value these children and seen God do amazing things,” Chris said. “We hope that the church will not only be accepting, but will see the injustice of the system and do something about it.”

They added that without the church body, they could not have done what they have done.

“The members gave financially and have supported us, not only with prayer, but with physical things since we’ve been home,” Mary said.

The Malones said there are hundreds of children like theirs ready to be adopted.

“We can’t get over what we saw, knowing these children are in need,” said Mary. “God is sometimes going to ask us to do things we’re incapable of doing. But He’s only asking for our availability. When we look at these boys and see them blossoming, we have to thank God for leading us to them.”

“It’s so amazing that people so insignificant in the scheme of the universe are so significant to God,” said Chris. “And these children who the world has forgotten about have had the eyes of the Father on them. And from the day we were born, God has had us on a path to bring these boys into our family. That’s amazing.”

For information on adopting Down Syndrome children, go to reecesrainbow.com or e-mail the Malones at malonenine@gmail.com.