From the front door to the ends of the Earth 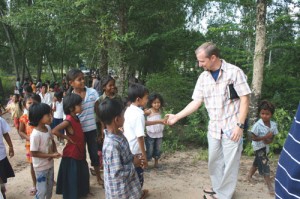 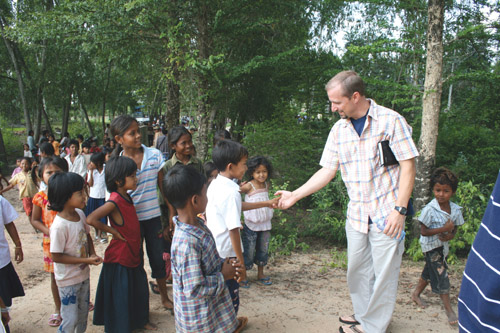 As far as the Cooperative Program is concerned, Doug Melton and Oklahoma City, Southern Hills are a perfect fit. Both “grew up” with the CP at the forefront. Melton said even as a small child attending Seminole, First, he recalls sitting in business meetings with his parents when the Cooperative Program was discussed and the importance of it was emphasized.

“I remember hearing things like, ‘How long has it been since we’ve raised CP?’ or ‘We’re not going to cut CP,'” he said. “I was taught to make sure the Cooperative Program was protected, that cuts, if necessary, were made somewhere else.”

Melton said that was reinforced by the missionaries who came through the church and his understanding that the way they were funded was through the Cooperative Program.

“I also remember being taught that our missionaries never have to ask for money, because the funds we give through our church goes to support them,” he said. “I’ve always been a big fan of the Cooperative Program. God was the one who laid it on the hearts of folks a long time ago. It is a plan devised by Him.”

In 2000, Melton became the fifth pastor of Oklahoma City, Southern Hills, moving from Oklahoma Baptist University, where he served as dean of students.

“That has always been at the heart of our church,” observed Melton. “It was expressed through the first offering taken at the new church.”

He said the pastors preceding him were champions of the Cooperative Program.

During Jerry Fielder’s pastorate (1979-99), Southern Hills paid $1.2 million for an adjacent shopping center to use as educational space and constructed a new $3.75 million auditorium—all without cutting the percentage going to the Cooperative Program.

“None of our building or expansion projects ever interfered with our missions giving or the portion of our budget designated for missions,” Fielder said. “I’ve always had a strong personal commitment to missions and missions giving. Consequently, at Southern Hills, we did not reduce our mission expenditures to accommodate our local needs.”

CP giving during Fielder’s tenure increased every year, except 1991, when it fell sightly.

Southern Hills currently gives 12 percent to the Cooperative Program, up from 11.5 percent in 2006, and led the state three consecutive years (2004-06) in total giving.

In 2008, the church gave $456,224.41 to the Cooperative Program, topped only by Oklahoma City, Quail Springs, which is the first church in Oklahoma to give a half million dollars.

On top of that, Southern Hills missions giving included $194,133.58 to the Lottie Moon Christmas Offering for International Missions; $113,191.47 to the Annie Armstrong Easter Offering for North American Missions, and $18,841.15 to the Edna McMillan Offering for state missions.

Not only does the church support missions through the CP and state and international missions, but Southern Hills also is involved in mission work through its members.

Presently, the church has a team of five college students in Cambodia helping with an orphanage project.

“We’re partnering with a Vietnamese couple in Broken Arrow, helping them establish an orphanage, which has become the hub of church planting in that area,” said James Biesiadecki, Southern Hills missions and evangelism minister, who formerly was an IMB missionary in Central Asia. A second team, this time working in medical missions, will travel to Cambodia in July.

Also this summer, the church has a group of 12 men going to Salt Lake City in partnership with the Utah-Idaho convention to help tear out and install windows in a church’s worship center.

Members will also be working in Matamoros, Mexico in October constructing a building in a colony area just south of the border, where little villages are popping up, said Biesiadecki. They will also be helping with Vacation Bible School in that area.

In addition, several members are involved in local missions, including a Bible study for men and women who are either going into prison, coming out of prison or awaiting sentencing; an outdoor ministry for disabled children, teaching them such things as archery and fishing and exposing them to the Gospel, and prison ministry.

“We want our people to understand that missions begins at our front door and goes around the world,” said Melton.

Regardless of the cost of the mission trip, Southern Hills has a policy that members pay only $500 of the price, and the remainder is subsidized by the church.

Melton said Southern Hills has retired missionaries in its membership, both NAMB and IMB. A regional director for IMB is also a member of the church.

“Even before I came, we had a married couple with the IMB,” said Melton. “We have two other couples and three single individuals with the IMB, as well as a family of four with NAMB.