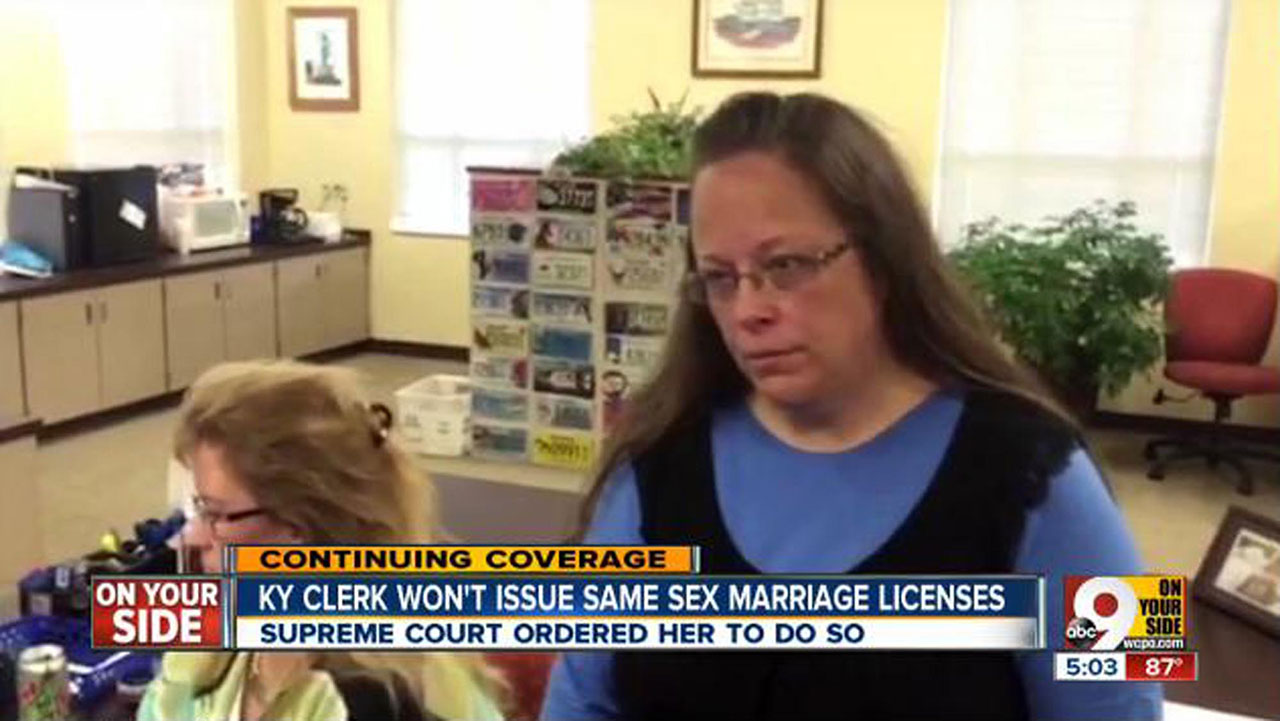 In finding her in contempt of court, Judge David Bunning rejected the option of fining Davis, instead ordering federal marshals to take her into custody until she agrees to abide by his earlier order to provide licenses to gay couples, according to The Louisville Courier-Journal. A fine would be insufficient, said Bunning, who expressed concern Davis’ supporters would pay any fine he levied, the newspaper reported.

“Her good-faith belief is simply not a viable defense,” the judge said, according to The Courier-Journal. “Oaths mean things.”

Davis told the court, “My conscience will not allow it. …  God’s moral law convicts me and conflicts with my duties.”

Later Sept. 3, five of the six deputy clerks in Davis’ office told Bunning they are willing to issue marriage licenses to same-sex couples. Bunning said he would be willing to lift the contempt charge against Davis as a result, but he planned to call her back into court later in the day to discuss it with her.

Davis’ jailing came three days after the U.S. Supreme Court denied her request to block enforcement of Bunning’s order. She has appealed the order to the U.S. Sixth Circuit Court of Appeals in Cincinnati, but Bunning’s order remains in effect while her appeal is considered.

Bunning’s decision to jail Davis — which was not requested by lawyers for the same-sex couples seeking marriage licenses in Rowan County — is the latest fallout from the Supreme Court’s June 26 decision legalizing same-sex marriage nationwide.

The justices’ 5-4 ruling heightened concerns among religious liberty advocates regarding the threat legalized gay marriage poses to Christian individuals and institutions, as well as other defenders of biblical, traditional marriage.

The opinion prompted some country clerks to resign their jobs rather than issue licenses to gay couples, while others have held onto their jobs while refusing to issue licenses. In the private sector, some businesses were closed even before the Supreme Court ruling as a result of their refusal to compromise their belief that marriage is only between a man and a woman. Wedding vendors — including florists, photographers and bakers — have been especially vulnerable in states where gay marriage was already legal.

“Everyone is stunned at this development,” said Mat Staver, chairman of Liberty Counsel, regarding Bunning’s action. Liberty Counsel is representing Davis.

“Today’s events will escalate this debate to a new level,” Staver said in a written statement. “This is not the kind of America the Founders envisioned or that most Americans want.”

The government could resolve this conflict by providing accommodations for county clerks with conscientious objections to issuing licenses to same-sex couples, Staver and other religious freedom advocates have said.

Among the accommodations suggested in Davis’ case by Liberty Counsel are removing her name from marriage licenses and permitting the county’s chief executive to issue licenses.

Russell Moore, president of the Southern Baptist Ethics & Religious Liberty Commission, had told Baptist Press Sept. 1 the government “ought to provide its employees with all protections possible to the furtherance of maintaining public order.”

“There are better solutions available than the one in Kentucky that needlessly pits the rule of law against freedom of conscience,” Moore said. “The governor and legislature of Kentucky could act to accommodate county clerks whose consciences object to issuing same-sex marriage licenses while still maintaining the rule of law.”

Bunning’s ruling appears to be “a blatant case of judicial overreaction,” said R. Albert Mohler Jr., president of Southern Baptist Theological Seminary in Louisville, Ky. It also is “a clear indication of the marginalization of traditional Christian morality and a direct endangerment to religious liberty,” he said in a written statement.

“These are issues of wide- and long-standing debate, and the Christian worldview does not offer a simple formula in terms of understanding what a Christian’s responsibility may be in so many of these challenges we now face, especially as an office-holder, in the aftermath of the Supreme Court decision,” Mohler said. “But it is clear that this is a test, not just for Judge Bunning, not just Kim Davis, but for the entire nation as we are deciding what we will require at the price of conscience from fellow Americans.”

Frank S. Page, president of the Southern Baptist Convention Executive Committee, said, “For a judge to issue an arrest and jail decision in this instance” seems to reflect “an activist agenda where Christians are to be ‘taught a lesson.’” He noted it is increasingly apparent that “religious liberty is no longer a right in this country” when it conflicts with the homosexual agenda.

“It is a sad day which I believe we will see replicated in numerous ways in the days to come,” Page said.

After the Supreme Court refused Aug. 31 to grant a stay to Davis pending her appeal to the Sixth Circuit Court, her office still refused to grant licenses to gay couples the next day. Lawyers for the gay couples subsequently filed a contempt of court motion against Davis.

Republican presidential candidate Mike Huckabee announced his support for Davis after speaking with her by phone Wednesday (Sept. 2).

“When people of conviction fight for what’s right they often pay a price, but if they don’t and we surrender, we will pay a far greater price for bowing to the false God [sic] of judicial supremacy,” Huckabee said in a written statement. “Government is not God.”

Sen. Marco Rubio, another GOP candidate for the White House, urged a balance between a government office’s responsibility to carry out the law and the liberty of workers in the office to exercise the freedom of religion and conscience.

“Our nation was founded on the human right of religious freedom,” Rubio told The New York Times Sept. 2, “and our elected leaders have a duty to protect that right by ensuring that no one is forced by the government to violate their conscience and deeply held religious beliefs about traditional marriage.”

Davis — who has been described in news reports as an Apostolic Christian — has been married four times, according to court records obtained by U.S. News and World Report. The most recent of her three divorces came in 2008, the magazine reported Sept. 1.

She became a Christian more than four years ago after attending church in response to the dying wish of her mother-in-law, Davis said in a Sept. 1 written statement.

“There I heard a message of grace and forgiveness and surrendered my life to Jesus Christ,” she said. “I am not perfect. No one is. But I am forgiven and I love my Lord and must be obedient to Him and to the Word of God.”