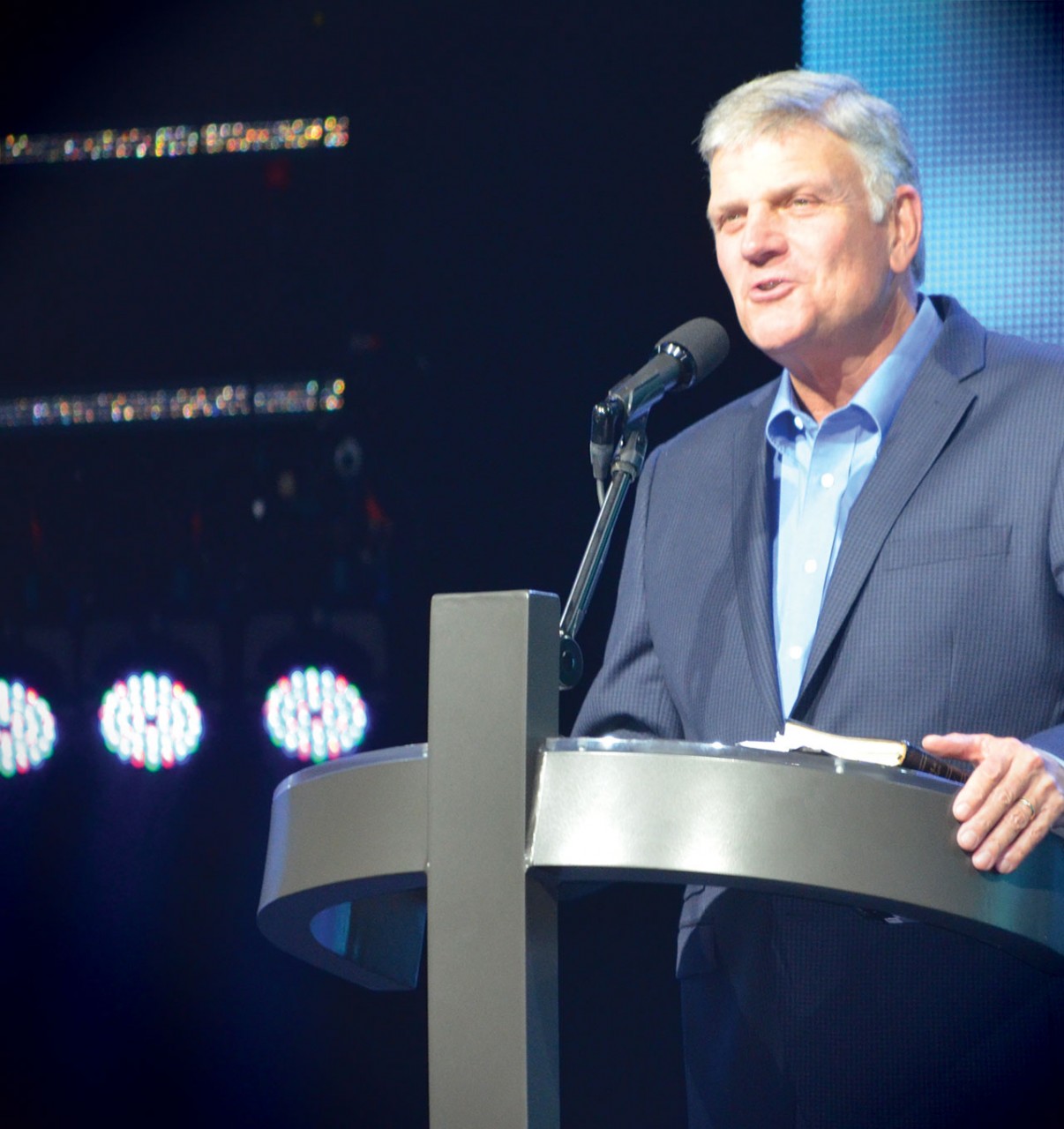 His father came to Oklahoma City in 1956 and again in 1983 and made one more appearance in 2003. Franklin Graham came on Aug. 22-23 with the same mission as those previous Billy Graham Crusades—to share the Gospel to those who needed to hear it. 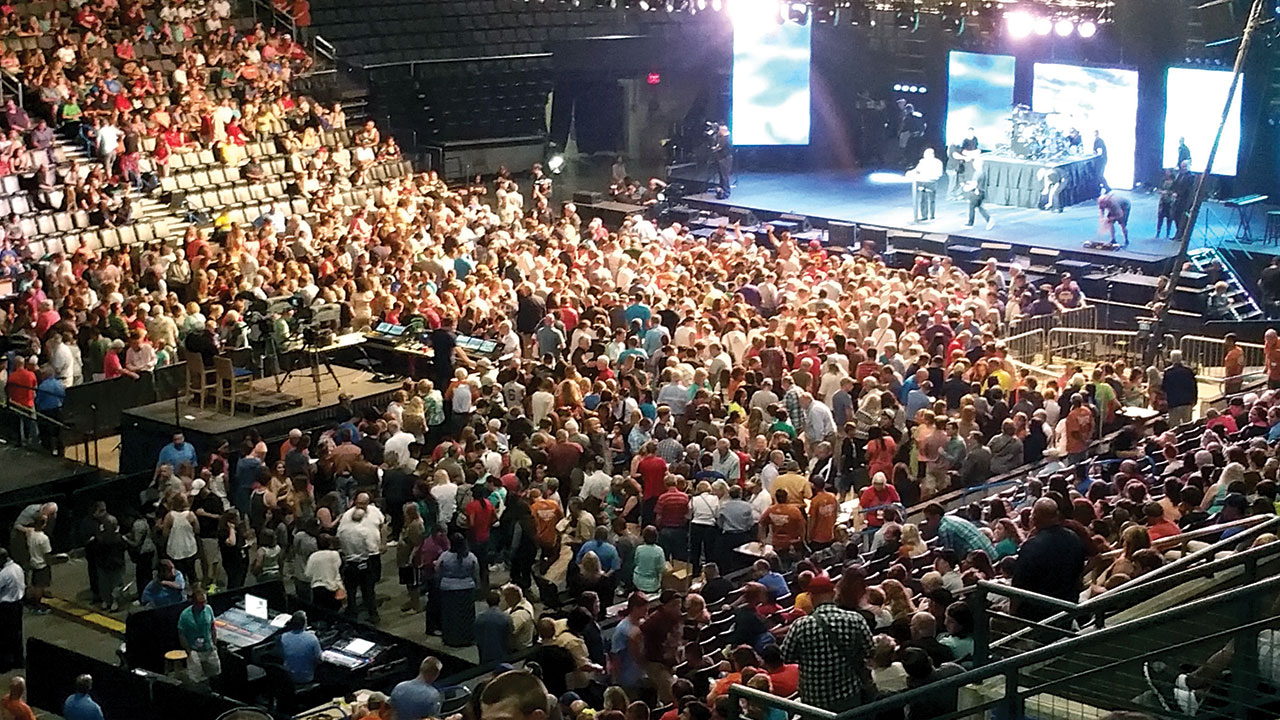 Many pack the floor of the Chesapeake Energy Arena during the invitation time Saturday night.
(Photo: Scott Doyle)

“Did you know that God loves you? God’s had a plan for your life? You say ‘Well, Franklin, I don’t think I’ve ever felt that way.’ Well, maybe because sin is blocking the way. Tonight, you can come and have your sins forgiven. You can have that settled once and for all,” Graham said during the message he gave on the first night of the Good News Festival in front of a large attendance of mostly young people in the Chesapeake Energy Arena.

Hundreds came to the floor of the arena in response to Graham’s invitation, and many made a profession of faith. “The Bible tells us that if just one sinner repents, all of Heaven rejoices,” said Graham, overlooking the many who made life-changing decisions.

The first night of the Good News Festival featured many Christian artists who appealed to a younger audience, including Skillet, a Christian rock band, which closed out the evening. Rapper Dae-Lee and singer Lacey also performed.

Before Graham gave his message, Lacey shared her testimony of how Jesus saved her from a troubling life as a teenager who was filled with anger and depression. She said she planned to commit suicide, but her grandmother made her go to a church service, and Lacey’s heart was penetrated when someone at church shared the Gospel with her. 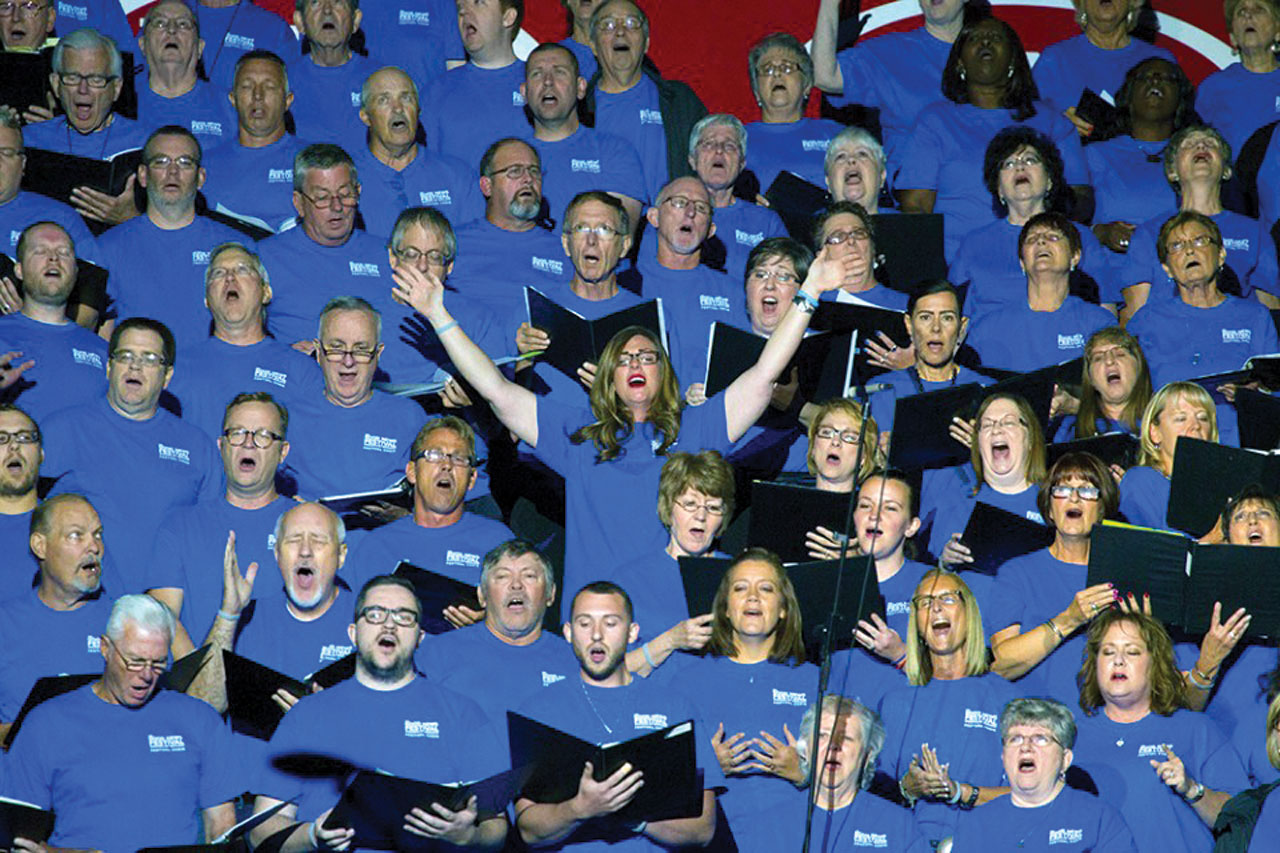 Graham shared thoughts of his father, Billy Graham, in the opening of his message during the final night of the Festival.

“My father wishes he could be here tonight,” he said. “He’s 97 and is not able to get out of the house. He’s still pretty sharp. His day is confined to home and visiting with visitors who come to see him there. But he knows I’m here, and he’s praying for us tonight.”

The audience responded with loud applause during Graham’s report of his father.

In both of his sermons, Graham addressed the issue of marriage.

“Any type of sexual relationship outside of the marriage relationship between a man and a woman is sin,” he said with much applause and cheering from the audience. “It doesn’t matter what the president says. It’s not two men and not two women. God is the one who sets the standard of marriage, not the Supreme Court.”

Graham also discussed abortion. “There are some of you here tonight. You’ve had an abortion. Now, listen to me. God will forgive you tonight, OK? And there are some of you here tonight who have approved of your daughter or your wife or your girlfriend or your sister or someone in your family. You have . . . given your approval of that abortion. You’re guilty, too. The blood is on your hands. But God, tonight, will forgive you.” 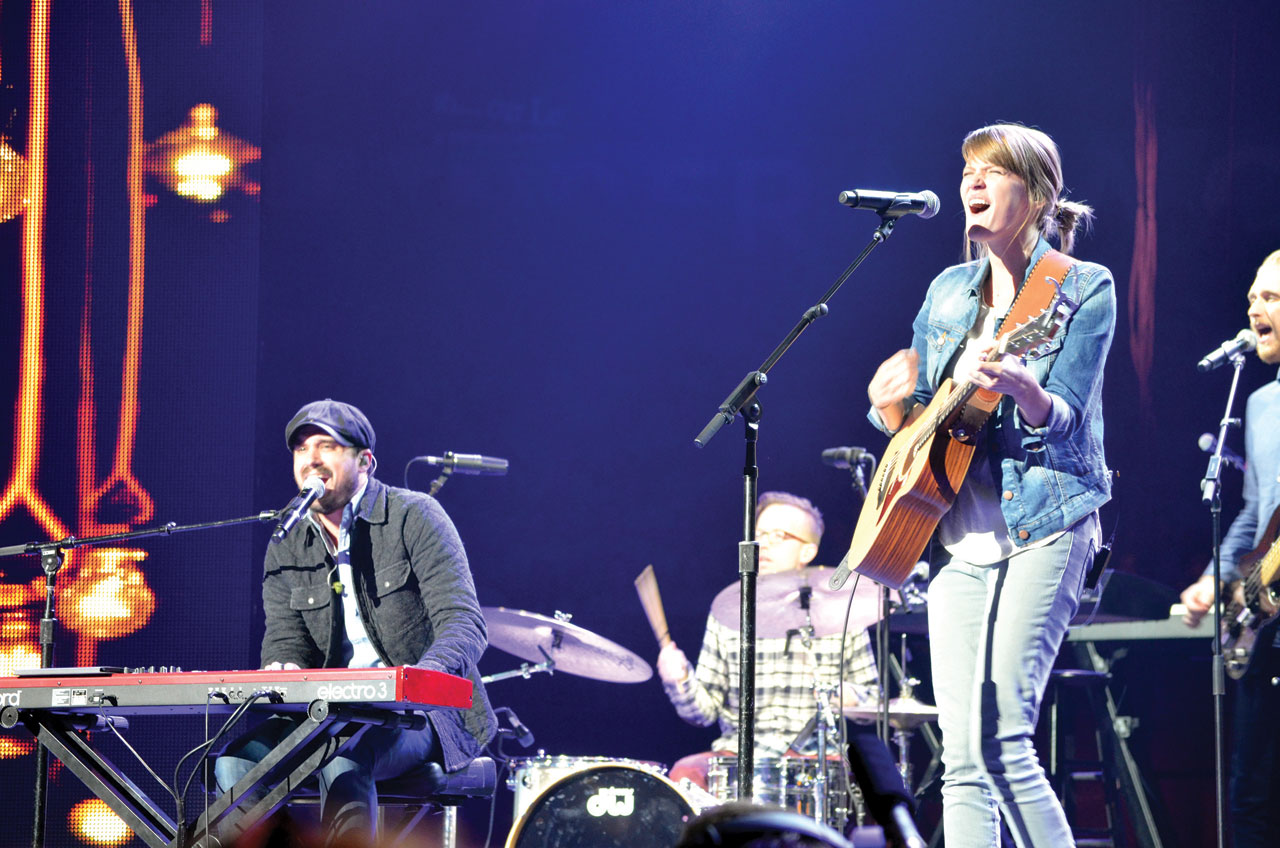 The Sunday evening session featured music from Michael W. Smith and upcoming Christian band All Sons and Daughters, as well as fast-picking guitarist Dennis Agajanian and the Tommy Croomes Band. A highlight of the worship time was the choir of more than 1,000 singers made up of members from many churches across the state. 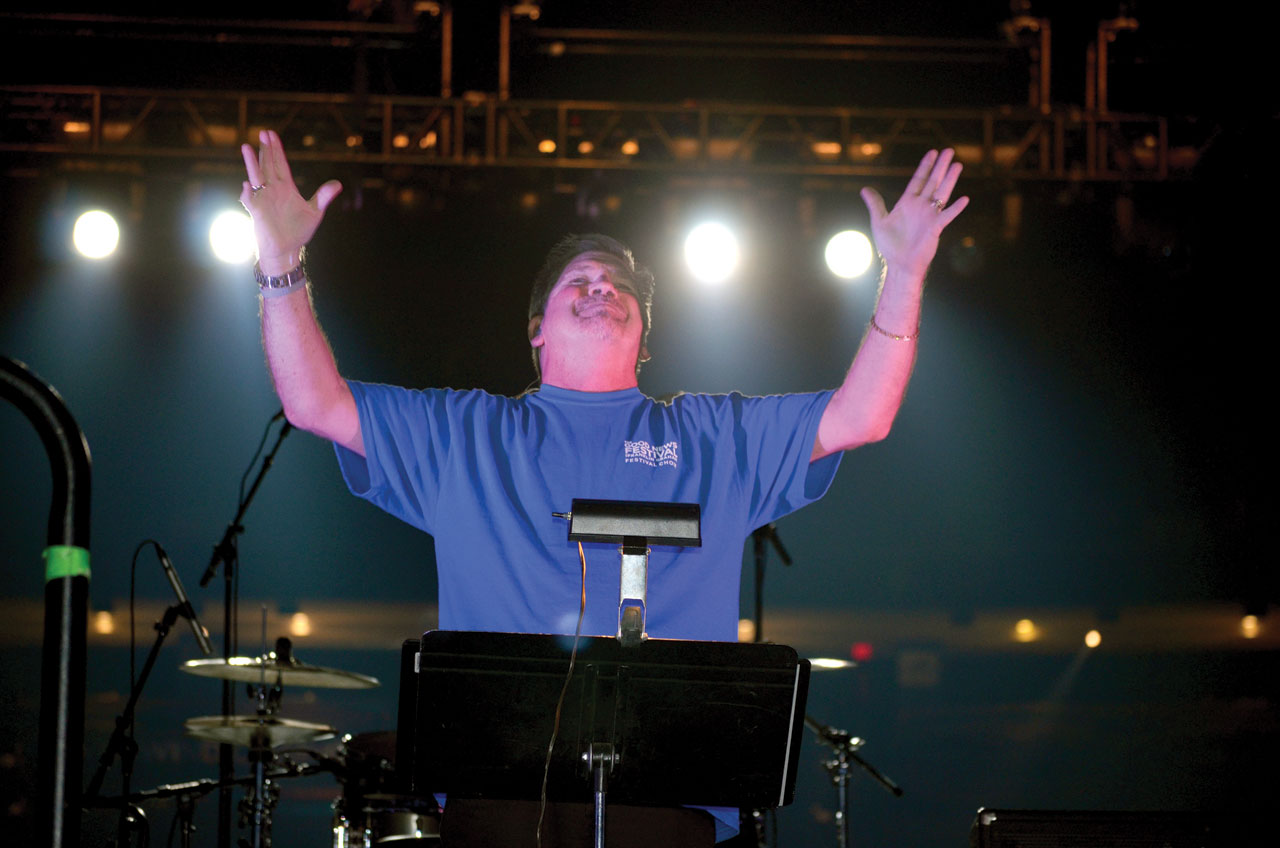 Those attending the final session of the Festival were amazed at the size and the sound of the choir that filled up four lower sections and spilled into six higher sections of the arena. Randy Lind, worship and music ministries specialist for the Baptist General Convention of Oklahoma, served as the choir director of the Good News Festival choir.

“It was pretty amazing and a blast to direct,” Lind said about choir. “I think the people who were singing had a great time. It was beautiful because it was people from all over the state of Oklahoma, many different denominations that came together to be the Church.”

Festival choir members prepared weeks in advance by attending one of four rehearsals in Oklahoma City and Lawton. Lind said other church choirs rehearsed on their own so they would be able to participate.

Lind reflected on how nostalgic it was for people to experience this choir performance at the Festival.

/// Work of the Festival continues 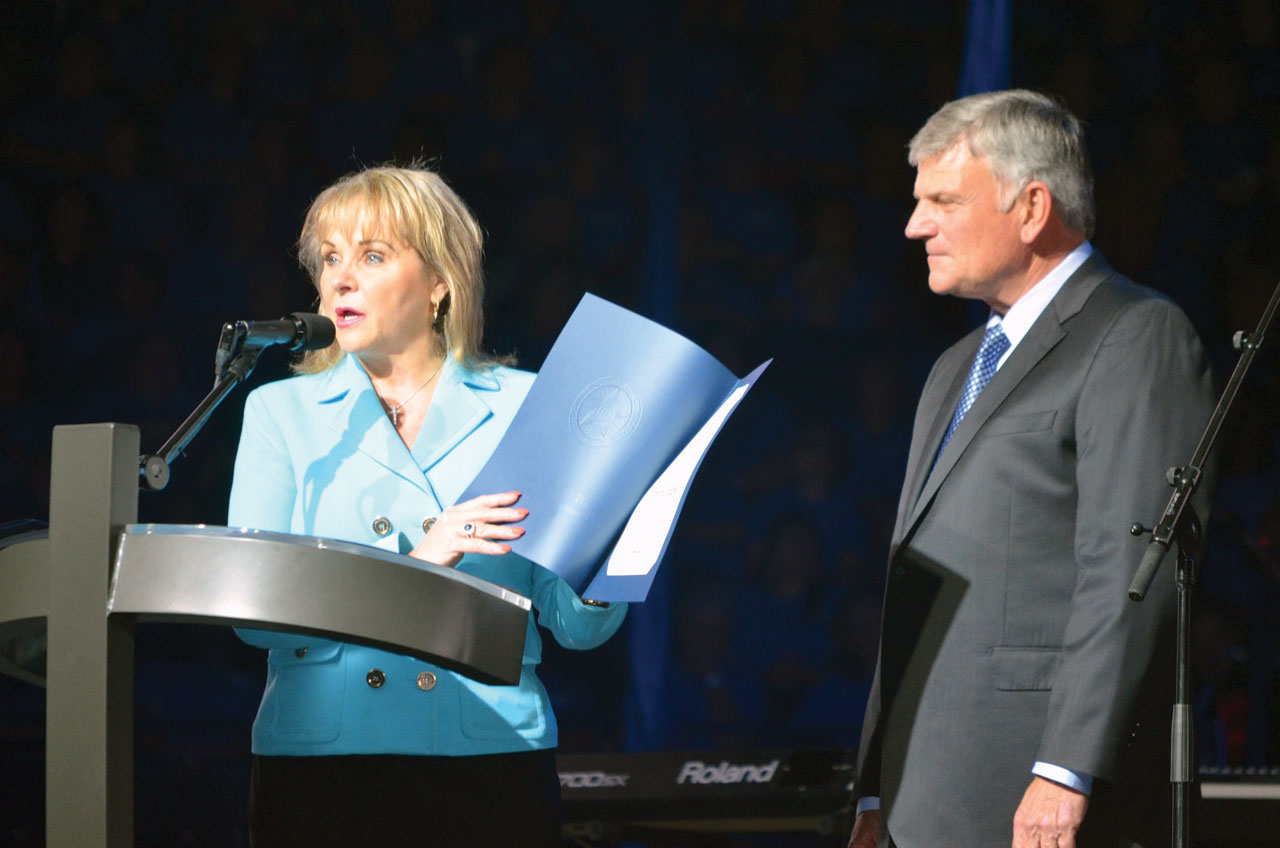 Oklahoma Gov. Mary Fallin offered a proclamation which made Graham an honorary citizen of Oklahoma. The governor also shared a word of testimony of her Christian faith and said her children made life-changing decisions during the 2003 Billy Graham Crusade in Oklahoma City.
(Photo: Chris Doyle)

Many people are not aware of the intense preparation involved in putting on the Good News Festival. Members of the Billy Graham Evangelistic Association (BGEA) set up an office in Oklahoma City months in advance to prepare for the weekend Festival and will remain weeks after the Festival.

Jimmy Kinnaird, pastor of Oklahoma City, Village, served as a Festival echelon supervisor—a facilitator who makes sure everyone who comes during the invitation time is connected with a counselor. He gave some insight to what goes on in preparation for this event.

“They came in and trained the members of churches all over Oklahoma City in personal Bible Study skills, prayer, how to share their faith and how to help new believers to grow,” said Kinnaird. “That alone may be the greatest and longest lasting imprint they have made.”

The beauty of what BGEA does when they put on a Billy Graham Crusade in past years or a Good News Festival in current day is the thorough training of local church members who are involved in the many duties of the Festival. Church members serve as ushers, counselors, and volunteers who work after the sessions to collect information of those who made decisions. They also participate in prayer meetings before the Festival and in follow-up with those who made decisions, making sure they are connected with a local church, as well as encouraging new believers to do personal Bible study and discipleship. 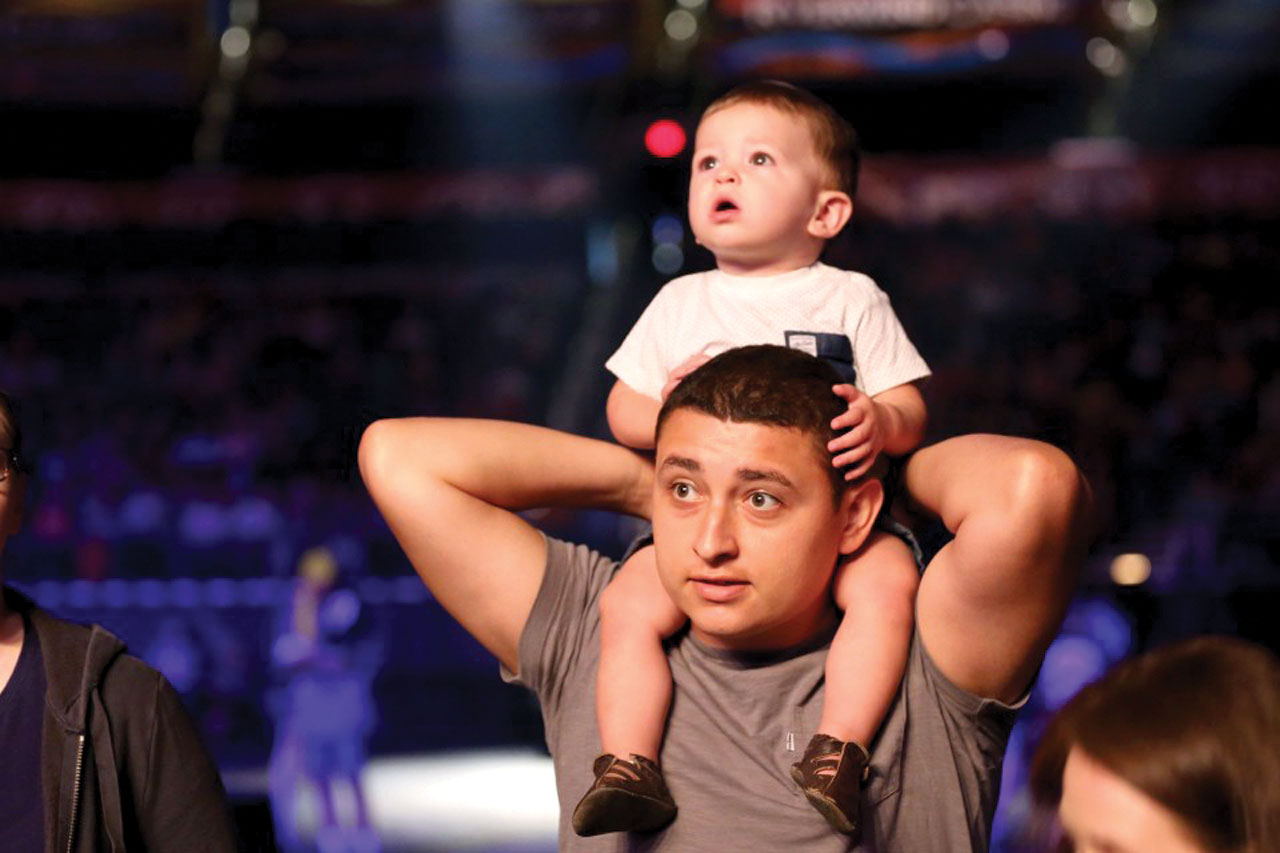 “Our local BGEA staff did a wonderful job,” Kinnaird said. “They never took their eyes off the goal and continually labored and did whatever it took to make this happen. The local staff office was helpful, kind and always supportive. They really did bend over backwards to help in any way. The same can be said for the national staff. Their experience brought credibility to the whole project.”