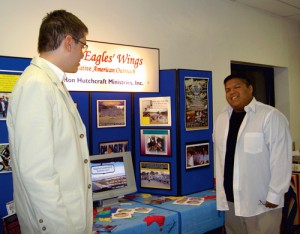 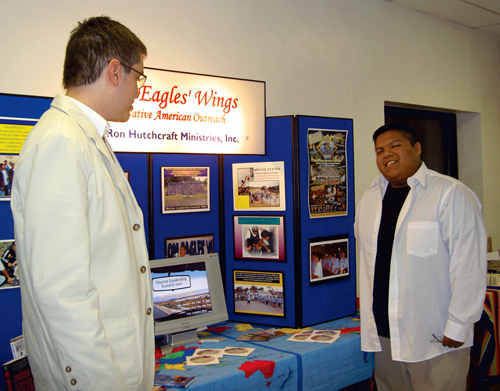 Some people think a tendency not to want to be around sinners is a sign of maturity, Josh Hunt told about 100 people attending the Indian Evangelism Conference at Oklahoma City, Glorieta. “Some people prefer not be around sinners,” said Hunt, speaker and author from Las Cruces, N.M. “We want to reach nice, funny, interesting people for God, not those who are hard to love.”

Hunt said God is still looking for people who will go into the life saving business with Him.

“Risking 99 sheep for one lost one (Luke 15) doesn’t make a lot of sense, until you think about losing something valuable,” he said. “When you lose something important to you, you get tense, agitated. God has unlimited capacity to think about things, but, like yours, His mind is focused when something is lost.”

He said it is impossible to love the Father without sharing His heart for those who are far from him.

“We tend to divide the world into two categories-sinners and ‘real’ sinners,” he noted. “But if you dropped Jesus into a crowd, He would mingle with those who are far from Him.”

The truth is, he said, the more spiritually mature you are, the more you will want to reach out to people who are lost.

“You can’t have one attitude toward God and another toward those who are far from Him,” he said.

Y.C. Jimenez, pastor of First Church in Orange Vale, Calif., said when you take God’s wisdom and combine it with nature, you’ll discover God has some interesting messages for you.

Using the eagle to make his four points, Jimenez said, one, you have to engage the principle of focus. Explaining the eagle’s eye can spot prey three square miles from a fixed focus, he said we need to stay focused on winning people to Christ.

“Unless Christians begin to get a focus for lost people, many of our churches will be dead in the next 10 years,” he said.

We also need to embrace the principle of renewed strength. He pointed out that the eagle uses currents of air to soar, which saves energy.

“When you catch wind with God, you draw from the strength of God and don’t grow weary,” he said. “Don’t keep flopping your wings yourself, but move with God.”

And thirdly, we need to initiate the principle of release, he said.

“The talons are the eagle’s most important tools,” he pointed out. “It catches and releases with those talons. A big salmon will pull an eagle down, so it has to let go. If you’re going to fly with God, you have to let go-you have to release family, the death of a loved one, etc., so you can live freely.”

Finally, he said, you must accept the principle of adversity.

“The higher the eagle goes, the more dangerous it is,” he noted. “The higher you are, the more the devil tries to attack you. The eagle goes higher to get above the storm. You have to raise your wings so the enemy misses you.”

Richard Pickup, Salina evangelist, preaching on John 7:37, said unless we drink from the well, we are headed for hard times.

“We are living in a dry place and not seeing the movement of God like we need to,” Pickup said. “All we are doing today is getting other people’s church members.”

He admonished that we want souls to be saved, but at someone else’s commitment.

He said when he wanted something to change in his life, a Baptist preacher with a Bible came into a bar at 1:30 in the morning.

“At 2 a.m., I walked out of that bar a different man,” Pickup divulged. “Jesus changed me.”

He declared Jesus is having a hard time because He can’t find people to go out to the lost and bring them in.

“We’ve forgotten how to win souls.”