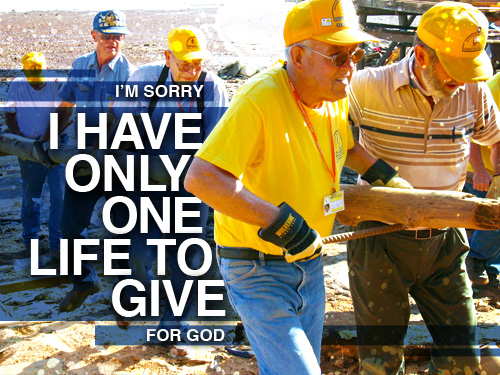 “I only regret that I have but one life to give for my country.”

Most have heard this statement made by American patriot Nathan Hale before he was hanged as a spy by the British during the Revolutionary War.

But perhaps more meaningful is the statement of Mission Service Corps volunteer Norman Wagoner, who said, “I’m sorry I have just one life to give for God.”

Those who know Wagoner and have worked with him might repute that statement. To many, it seems Wagoner has given at least five lifetimes to volunteer ministries.

It’s going to take up to five people to replace him, according to Sam Porter, partnership and volunteer ministries specialist for the Baptist General Convention of Oklahoma, where Wagoner has been Porter’s right-hand man coordinating volunteers for the last 11 years.

Wagoner, who had prostate cancer five years ago, discovered in January that the cancer had returned in his bones. He has been unable to travel from his home in Eufaula to his office in the Baptist Building in Oklahoma City since August.

Wagoner has been an active lay volunteer most of his life. He was a charter member of the first Oklahoma disaster relief team in 1973, and vitally involved in missions, Brotherhood, Royal Ambassadors and volunteer builders.

An accountant for an oil company, Wagoner took early severance retirement and bought a hardware store in Eufaula.

After his wife died of cancer, he met and married Flo, whose husband died within a year of Wagoner’s wife. They sold the hardware store and went on mission becoming Mission Service Corps volunteers with the North American Mission Board.

They were assigned to North Dakota, then Wyoming, where he was men’s ministry/Brotherhood leader for six years. He used disaster relief efforts to build a ministry and as a tool to get men involved, and Oklahoma helped him build the first feeding unit for Wyoming by buying a disaster relief trailer for the state.

He returned to Oklahoma in 1997, where he helped coordinate volunteer building, then moved to Hawaii for a year to work with Baptist men there and direct disaster relief.

When he came back to Oklahoma, Porter asked him to help oversee disaster relief in the Sooner state.

“The biggest thing he’s helped me with is developing associational feeding units using the model he had in Wyoming,” said Porter. “We now have 16 associations with feeding units.”

From the time Porter came to the Baptist Building, disaster relief volunteers have grown from 300 to more than 5,000.

“Norman had a huge role in this,” said Porter. “We now have 36 trainings a year instead of just one.”

Wagoner, who has served as a layman in disaster relief for 38 years, 22 of those as a volunteer missionary, was presented the prestigious Robert E. Dixon Award from NAMB in 2009.

“This is one of the convention’s highest volunteer honors, a Hall of Fame-type award based on a lifetime of service that helped shape the course of Southern Baptist Disaster Relief,” said Porter. “Very few laymen have received that award.”

Wagoner was also recently honored at a tribute service at his home church—Eufaula, North Fork.

Among those speaking at the tribute was the mayor of Eufaula, Selena Jayne-Dornan, who said Wagoner and his wife came to her when she was running for office and asked if they could pray for her.

“He has a heart to reach men,” Porter emphasized. “He realizes volunteer missions gives men a place to plug in they might not have otherwise—that their hands-on work can make a difference.”

“He invested a lot of time and effort in that camp,” Porter said.

Wagoner said he has always enjoyed working with men. He compared men’s ministry to God walking in the Garden of Eden with Adam.

“Can you imagine Adam, made in the image of God, walking alongside God?” Wagoner asked. “That’s how men’s ministry should be—walking with God, sharing aches, pains, joys and relationships.”

He said he formed a picture of that when he was working in Thailand after the tsunami, and six of the men he was with carried a heavy beam, which was to be used to support a house.

“One of us couldn’t have carried it, but together we did,” he pointed out. “That’s the way men’s work should be.”

Wagoner, who has served on mission 17 times in nine countries, said, “If you want to serve the Lord, get a passport.” He added that if there were not volunteers, God would have to shut down missions and ministry.

“Oklahoma Baptists have been loving, kind and encouraging,” Wagoner said. “We’ve been the ones blessed. It’s been a pleasure to work for no salary.”

Porter said Wagoner has been a faithful servant, a man truly sold out to God.

“He’s not normal,” Porter related. “He works harder than anyone at the BGCO.”

Randy Adams, leader of the BGCO’s church outreach team, who has been serving as interim pastor at Eufaula, North Fork, said Wagoner’s church has been affected by his ministry.

“In that church are dozens of men and women who are involved in disaster relief, Baptist Builders and other volunteer missions, mostly due to Norman’s influence,” said Adams. “The other thing I have been told repeatedly is that Norman makes sure the church remembers to pray. He leads a prayer meeting following the Sunday evening service each week. Norman Wagoner is a true spiritual giant among Oklahoma Baptists, and that’s not hyperbole.”

“Norman’s influence in his church and the Eufaula area has made a group of volunteers from that rural area to be prime examples of what a church and/or community can do when they decide to ‘give themselves’ to be on mission whatever the task.”

Porter added that even with Wagoner’s illness, he is still trying to pick other people up.

“He sends emails most every day saying he is praying for us,” Porter noted. “He is the ultimate encourager.

“Norman has taught lots of men how to live,” Porter commented. “Today, Norman is teaching men how to die. He’s walking through the valley of the shadow of death, and he can show men how to walk by faith knowing death is coming.”