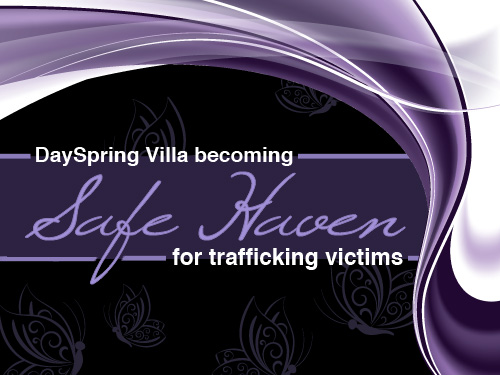 Since 1995, DaySpring Villa has housed more than 6,000 women and children who have experienced domestic violence, sexual assault or stalking.

As the only faith-based certified domestic violence  shelter in Oklahoma, the facility is now opening its doors to receive those who have experienced the horrors of human trafficking.

“We have a goal to build a wing for human trafficking victims, but until we get that funding, we are remodeling an area for this purpose,” said Wilma Lively, executive director.

In July, new domestic violence standards came out, which included a section on sexual human trafficking, Lively said. That’s when the shelter made the decision to devote space to those victims.

“Sometimes the victims of domestic violence have been in human trafficking, and are not aware that’s what they were in,” Lively pointed out. “Over the years, we’ve helped victims who have been strippers in night clubs and women who have been in that lifestyle.”

The human trafficking victims are treated much like other residents of the shelter, Lively said, except most of them need respite care more than anything.

“They first of all need to heal and rest,” she said.

Lively noted that case workers work with all the residents on what their needs are and what their goals are.

“Human trafficking victims will probably take longer to recover because they are going to need counseling to get past this,” Lively said. “The average age of young women brought into trafficking is 12-13 years old, so they have a long history before we get them at around age 18.”

She said presently, the shelter can accommodate only three or four human trafficking vitims, but once they get funding to build, 12-15 could be housed in the new wing.

“We now can accommodate 23 women and how ever many children come with them,” she explained. “We always say we can sleep 55 women and children, but actually have 23 sleeping units. This past month, we’ve been running 24 women who came to us because of domestic violence, sexual abuse and stalking.”

Lively revealed the reason for opening the shelter to human trafficking victims came about when some case managers attended an OATH conference in Norman.

“They brought back information, and we started looking at this as something we needed to do to help these women,” Lively said. “Because we are the only faith-based domestic violence shelter in Oklahoma, we knew that was going to become part of the standards.”

Lively acknowledged the goal of the shelter’s program is to transform lives.

“We deal with the whole person, their emotional, physical and spiritual well being,” she said. “We meet with them weekly and hold them accountable as to how they spend their money. They can’t just come here and sit. We look at each individual person to determine what they need to do to heal.”

Lively said the average stay last year was 80 days, up from 56 days just a few years ago.

“We’ve had several stay more than a year, because it takes them that long to get on their feet,” she said. “I can’t stress enough how we look at each person as an individual. We don’t have group goals. And everything we do focuses on Who Jesus Christ is.”

The need for a safe haven for human trafficking victims is enormous in Oklahoma, because the state is geographically located to be a hub for exploitation with the intersections of two major Interstate systems—I-40 and I-35.

A Special Agent on the Oklahoma City Human Trafficking Task Force reported that there are so many cases in the restaurant, hotel and farming industry that it is not financially possible to prosecute all of the cases. Another lead officer on the Oklahoma City H.T. Task Force reported at a meeting in 2010 that there were more than 100 child sex trafficking cases opened in the first year of investigative operations.
Muskogee County Deputy Jeff Gragg and his dog Apollo help monitor I-40, looking for human and drug trafficking.

“There are several thousand, probably a month, that go down our highway right here,” Deputy Gragg said.

In 2010, then Oklahoma Governor Brad Henry signed a law that increases the penalty for those caught trafficking humans.

Elam said there are 27 million known slaves in the world. Of that, 80 percent are women; half are children.
“There are 170 countries now that buy and sell humans,” Elam said. “One is America.”

Why such a demand? Sadly, it’s the resale value.

“You can only sell a kilo of cocaine once,” Elam said. “Humans you can sell again and again and again.”
It is an estimated $34 billion/year industry.

According to Elam, cities in Oklahoma are on human trafficking routes throughout the Midwest.

“This year, the USA became the number one destination for trafficking humans,” Elam said. “More than 300,000 children are sexually exploited each year. An estimated 500,000 are not reported.”

To learn more about DaySpring Villa, located in the Tulsa area, visit the website at www.dayspringvilla.com.