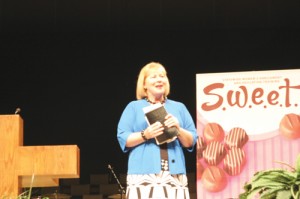 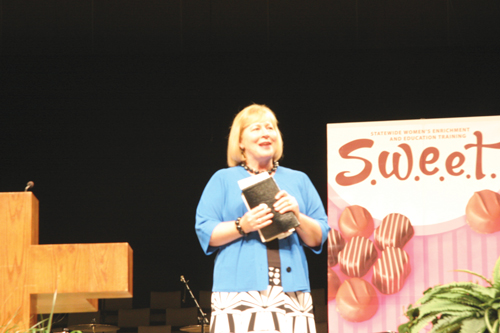 She walked slowly through the room filled with women sitting at round tables sipping tea. Her hijab fit snuggly over her head and around her chin. Her dark green jilbab flowed from her neck to her feet. She calmly told what it is like to be a Muslim woman, about her family, her traditions and the knowledge she has about Jesus.

“She” was Paula Hemphill, one of the featured speakers at S.W.E.E.T. Saturday (Statewide Women’s Enrichment and Education Training) at Del City, First Southern, and those around the tables were women ministry leaders from across the state.

Hemphill, women’s missional strategist for the International Mission Board, then led the women in prayer, teaching them some of the positions used by Muslims during their prayer times—standing, listening, bowing, worshiping and kneeling, and focusing especially on Muslim women in Central Asia. She explained all of these prayer positions were used by Jews and early Christians before the birth of Islam.

“For a Muslim, Arabic is the only legitimate language for prayer,” she said. “Most Central Asian women do not speak Arabic, but they recite prayers in Arabic, five times a day during ‘namaz,’ to earn ‘sawab,’ or merit with God.”

Hemphill said women who choose to follow Christ are often ostracized and persecuted by their own families.

“Pray that their husbands, brothers and fathers would be saved when they witness the godly example and loving submission of these faithful women,” she encouraged.

Revealing that one in every 10 people in the world is a Muslim woman, Hemphill urged the women to continue to pray that God will unveil the hearts of Muslim women and open their minds to receive His Truth.

The “Share Tea, Share Life Prayer Experience” was a part of the Aug. 29 day-long session attended by some 600 women ministry leaders from 140 churches, who were able to choose from more than 30 seminars, forums and tracks ranging from ministering to the grieving to missions in India to reaching the generations.

A special guest seminar leader was Rebekah Naylor, a medical doctor who served 35 years in India.

She told women that the missionary nature of God is evident from the beginning.

“It’s His mission, not something we dreamed up or an activity we planned,” she said. “The mission is that all may know Him, that all may worship and glorify Him and that salvation will be spread to the ends of the Earth.”

“God chose people to communicate that message,” she said. “In Scripture, we see God using humans to communicate His message, and we see that His power is available to us to carry out that mission.”

Earlier, Rhonda Kelley, professor of women’s ministry at New Orleans Seminary and wife of the seminary’s president, Chuck Kelley, said God has been doing a work in her to help her understand that “work” is not a “bad” four-letter word.

“We have work to do—wash, iron, fold, dust—but work is also a good four-letter word—love, give, hope,” she said. “I pray today you will change your attitude toward work.”

Using the perspective of a journalist—who, what, when where, why and how—she emphasized our work is for the Lord.

“What is work?” she asked. “It is whatever you do, whether a small or large task. When we do it as unto the Lord, it becomes ministry.”

She noted the Christian life should involve actions, words and attitude.

“If married, work on being submissive to your husband,” she said. “On the job, obey human masters. Although it changes over time, work has been given to you by God.”

How do you work? Enthusiastically, she said.

“You should be filled with excitement and energy,” she said. “Excited the Lord has called you to salvation, to service, compassion, kindness, humility, gentleness, patience, acceptance, forgiveness, love, thankfulness. That’s how we are to work.”

Why do we work? For the Lord and not for men, she pointed out.

“It’s nice when someone says thank you, but we, as those called to serve the Lord, know our ultimate praise comes from God. We are doing it for the glory of God. We were chosen by God, forgiven by God, and we should desire to work for Him.”

To emphasize her point, she said she picks up her husband’s shoes and puts away his coffee cup because she loves him.

“We should do for the Lord because we love him,” she said.

When do we work? All the time.

“The work is now,” she emphasized. “The harvest is plentiful, but laborers are few. We can’t wait until we feel we have the abilities. God’s reward comes to us in the future as promised.”

She concluded that we work wherever God sends us and where there is need, and the Who we work for is the Lord, the Messiah, the Promised One.