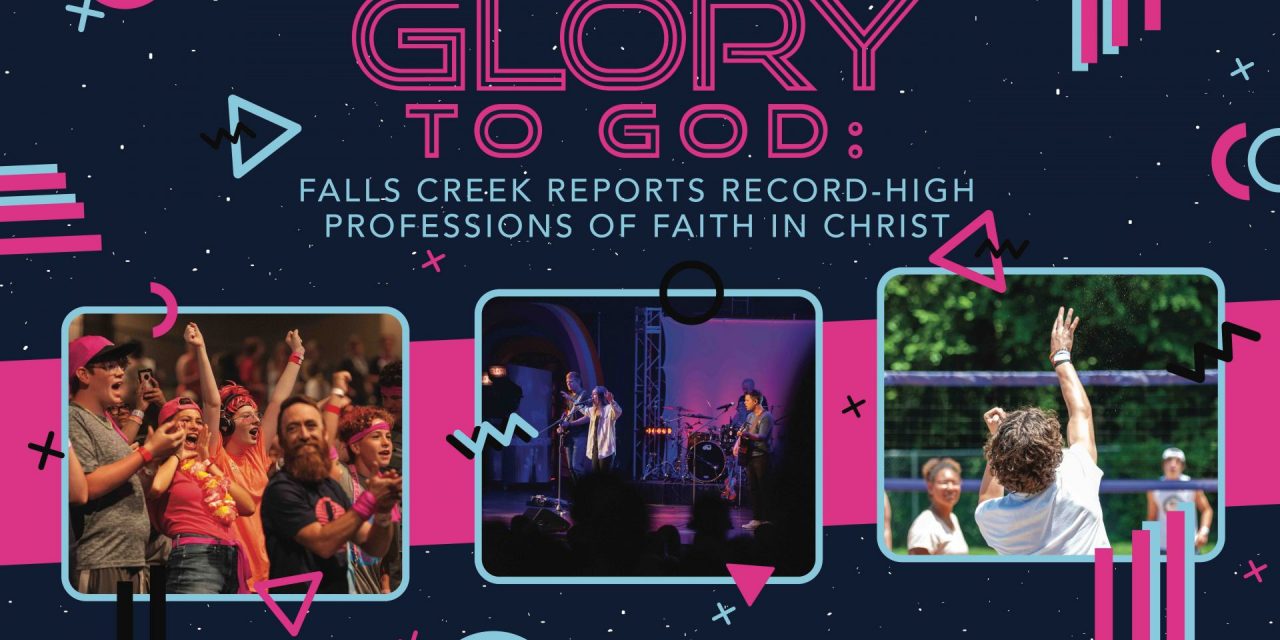 This verse is part of the focal passage around the theme of “Glory” during the summer youth weeks at Falls Creek Conference Center. This could also be the response from the entire camp leadership, as they saw God move in a powerful way through all eight weeks. 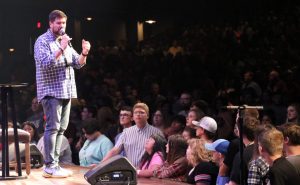 Todd Sanders talks to students who publicly made spiritual decisions.

Falls Creek witnessed 2,645 campers make professions of faith in Christ, which is the most recorded during a summer at the campground in the Arbuckle Mountains. More than 5,600 total spiritual decisions were reported, including 617 campers who surrendered to the call to ministry.

“Falls Creek 2021 is a wrap!” reported Todd Sanders, Falls Creek program director, in a concluding email to Oklahoma Baptist leadership. “The stage is cleared, our missions areas are tucked away, the storage building is filled, and the truck is loaded, the rooms are empty, but what the Lord did lingers. There is much upon which to reflect.”

Sanders also heard from many church leaders who gave raving reports. “’This week has really hit home with our group. We needed this;’” Sanders shared. “‘I wouldn’t trade our week for anything!’ So many comments just like these are what I heard. The Spirit was so present all summer. So many answers to the prayers we have been praying together.” 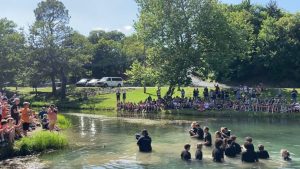 A church group emphasizes believers baptism during a week at Falls Creek.

He continued to reflect on the overall camp weeks, thinking how it started with a lower number of summer staffers—many of whom were first-time workers—and a lower overall attendance among church groups, but, as Sanders said, God continued to work.

“We asked the Lord to work through camp, calling people to Himself and to do ministry,” he said.

Having no camp in 2020, due to the pandemic, produced some “rust” in equipment and performance, but Sanders raved about everyone involved in making camp happen.

“Everyone responded really well,” Sanders said. “I couldn’t be more proud of everyone—full-time staff, convention staff, area supervisors, conference center staff, especially Andy (Harrison, director of Oklahoma Baptists conference centers) and his crew. It was a great collaborate effort, which shows the true picture of how Oklahoma Baptists are.”

When pointing out the comparison of lower camp attendance to a record-number of professions of faith, Sanders knew why it was possible.

“When we pray and ask the Lord to act, this is a prayer God wants to answer,” Sanders said. “Obviously, we ask of Him, and He brings the spiritual response. We prayed for Him to do what only He can do and not something we can orchestrate. We prayed to see 3,000 (professions of faith in Christ) this summer. We didn’t reach that, but we did see a record number of decisions. It’s not a failure point; it’s pointing out what God did.”

Monday night invitations during the first evening service of each camp week was a new addition this summer. Sanders said that could have been a factor to the number of spiritual decisions reported.

“Every leader I talked to thought it was a great thing,” Sanders said about adding Monday night invitations. “There were 617 professions of faith on Mondays. I think it did help increase our number of decisions. It was a demonstration to every camp that we are going to get serious about this. It was well received and set the stage every week, building an environment for students to meet with God and have Him work in their lives.”

Another encouraging element every week at camp was the emphasis of believers baptism. Sanders said this was a focal point, as a decline in baptisms has been reported, especially among students, not only in Oklahoma but across the country.

“We had more churches baptize at camp,” Sanders said. He also reported a baptism emphasis was made by every camp speaker, specifically on Wednesday nights, asking campers to make a commitment to be baptized, if they had not already followed the observance. Of the 662 “other” decisions that were made at Falls Creek this summer, a majority were baptism commitments.

Sanders could see enthusiasm from churches and students being back at Falls Creek after no camp in 2020.

“There was some adjustment, after taking a year off, but everybody was excited to be back at camp,” he said. “And I could tell churches were excited to invest in students, helping them grow in their relationships with Christ.”

Falls Creek offered a total of 17 breakout sessions for campers, many in the afternoons. They covered topics such as biblical sexuality and depression and anxiety. Sanders reported more than 10,000 students attended breakouts over the eight weeks.

“Students are looking for opportunities for spiritual growth,” he said. “We would have more than 300 students on average at our daybreak sessions at 6:15 in the morning.”

Falls Creek also offered training for adult leaders every Tuesday night. Sanders reported the training sessions, which focused on leading small groups, would average 200 adult leaders every week. “It was a great opportunity to help adults who want to invest in students,” Sanders said.

Getting back to camp was a great achievement at Falls Creek this summer, and Sanders appreciates this accomplishment

“I am glad that Oklahoma Baptists, across the state, support Falls Creek and have made it a priority to reach students with the Gospel,” he said.

But God receives the glory for all those who surrendered their lives to Him.