From victory to victory: 1940s a banner decade for country, Messenger 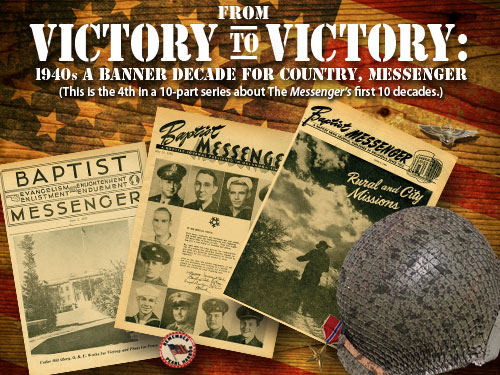 By 1943, with the economy booming because of America’s entry into World War II, subscriptions to the Baptist Messenger had grown to 25,000—all paid. More than 300 churches had placed the Messenger in their church budgets.

The Jan. 18, 1940 issue contained testimonials from several churches on the value of the Baptist Messenger for its members.

Robert S. Scales, then pastor of Sulphur, First, wrote: The First Baptist Church of Sulphur gave $3,748.15 for missions and benevolence and $3,799.33 for local expenses, making gifts to missions amount to 50 percent. That the Baptist Messenger, which goes into every home in the church membership, was one of the most important factors in developing and maintaining this missionary and stewardship spirit is beyond question.”

Editor E.C. Routh remained on board until 1943, when he received a letter from the executive secretary of the Foreign Mission Board asking him to come to Richmond, Va. to edit The Commission, Southern Baptists’ world journal. He was within a few years of retirement, but moved to Richmond, where he served with The Commission until 1948.

He was succeeded as editor by his son, Porter Wroe Routh on July 2, 1943. The 32-year-old Routh had served as acting editor since the resignation of his father in May.

The younger Routh said he learned some important lessons from his father and J.B.Gambrell, editor of the Texas Baptist Standard.

“Gambrell said, ‘A paper is edited for the readers and not for the writers,’ and ‘It is just as important to keep some things out of a paper as it is to put some things in,’” recalled Routh in his first editorial.

In talking about the purpose of the Messenger in a Sept. 6, 1945 editorial, Routh said, “The Baptist Messenger uses different devices in fulfilling its task. (1) It carries pages each week devoted to many of the agencies, such as the WMU and the Brotherhood. (2) It focuses attention on worthwhile mission achievements through editorials, news articles and pictures. (3) It devotes special editions to various causes. (4) It tries to be optimistic in tone and cooperative in practice, supporting wholeheartedly the Unified Budget chosen by Oklahoma Baptists as the plan for execution of their mission program.”

Routh resigned as editor of the Messenger, effective Oct. 1, 1945, moving to the Sunday School Board in Nashville, where he later became executive secretary-treasurer of the Executive Committee.

In one of his first editorials, the new editor said: “It is my intention to report and interpret Oklahoma Baptist news in an impartial and optimistic manner.”

McClellan hired the first editorial help in the Messenger office when he added Fern Hurt as associate editor in 1947. She served in that position for 37 years before her retirement in 1984.

The paper began publishing more photography during the decade, and the first letters to the editor column appeared, called “The Mail Bag.”

On Dec. 26, 1946, the first of the popular “Attendance Report” or sometimes headed “Report of Attendance” appeared. The churches reporting attendance were not listed alphabetically, like in later years, but by those that had the highest attendance.

When McClellan resigned in 1949 to become editor of publications for the Southern Baptist Executive Committee in Nashville, circulation had risen to 47,000, partly due to a campaign for “47,000 subscriptions in 1947.”

McClellan was succeeded by Jack L. Gritz, who became the Messenger’s fifth editor on Aug. 1, 1949.