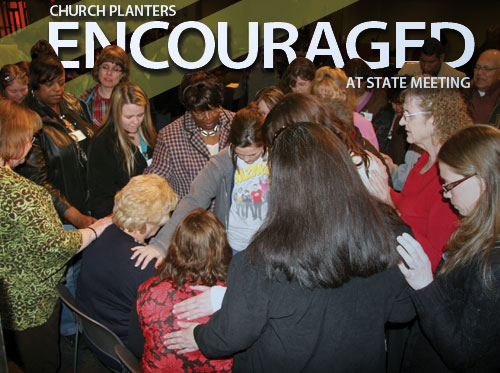 It’s a lonely job, but someone has to do it.

While dozens of church planters were reminded of the loneliness of their jobs, they also heard story after story of how God is working in new church starts across the state during the Church Planting Conference at Moore, First, March 9-10.

“Church planters are the most diverse group of people in Oklahoma,” said Bo Holland, leader of the Baptist General Convention of Oklahoma church planting group.

“But the bottom line is reaching people, in light of the differences in our color, culture and language.”

Pastor of one of the most publicized church plants in recent years, Ernie Tullis of Oklahoma City, Tri-Church, gave his testimony of leaving his poverty-stricken childhood neighborhood to become a rock star, playing with noted musicians throughout the world, then being led by God back into the neighborhood he worked so hard to escape.

Preaching on the parable of the sower and the seed in Mark, Tullis told the church planters “we have to stop blaming the ground and start clearing the ground.”

He gave examples of how to prepare the ground.

“You soften hard ground with tears,” he said. “There is a family of four, and the daddy  has been diagnosed with cancer. Unless there is an act of God, he won’t live out the year. We ministered to and cried with the family. In December, we baptized the whole family.”

Tullis said stony ground is cleared by bearing one another’s burdens. Another family had an unbearably hot house. The church bought an air conditioner and installed it. The next Sunday, the father, Jason, told Tullis “this church doesn’t suck at all,” and in December, the family members were baptized.”

Tullis confessed that the thorny heart is the hardest, but the thorns can be “jerked” out with the principle of displacement.

“You put so much good in, it replaces the bad,” he explained. “You do it through education, such as Whiz Kids, teaching them to read and write and showing them God’s love. We tell them to learn, learn, learn, then work, work, work.

“What if the planter had cleared his ground?” Tullis concluded. “When the lost becomes found, when chains of poverty and spiritual darkness are broken, it’s worth the hard work. Stop blaming the ground.”

Sandra Phillips, principal at Mark Twain Elementary School, and a member of Oklahoma City, Wilmont Place, praised Tri-Church, which now meets in the school, for its work in the neighborhood.

“I work with kids who are wounded and hurting, who keep deep, dark secrets, who don’t know where their next meal is coming from, whose parents are criminals and who don’t know how to live by rules,” she divulged.
Tri-Church was willing to walk beside us in what we were doing.”

The church spent $10,000 buying socks and underwear for the children. Members have also given food to families until their next paycheck, and provided Christmas for 10 families, some who have joined the church. These families were in turn given money to buy Christmas presents for another family.

“Ernie and his wife have been my biggest prayer partners,” said Phillips. “They prayed through the hallways of Mark Twain every Thursday for one year. We are now seeing a more united front and parents caring more about their children’s education.

“When you go into a community like the Flats, you are in a battlefield and will come in contact with the evil one, but we serve a mighty God Who has equipped us to stay strong in the faith.”

Featured speaker Jeremy Sin from the North American Mission Board, told of visiting a Chinese church plant in Fayetteville, Ga., near Atlanta for a Thanksgiving dinner.

“People were giving testimonies about the church and some were going back to China to witness to their friends,” he said. “Yet when this church started, most of the Chinese in the area lived on the other side of Atlanta. There were times, the church plant struggled with just the pastor and his wife at church services, but he knew this is where God told him to plant the church.

“Then two years ago, a company in the area hired 200 Chinese engineers. God had the church already there.”

Sin reminded the church planters that when they are struggling, to go back to their “Sea of Galilee” where God called them to be fishers of men.

“We are asked to do the work of fishers of men, but we take on other hats to minister to people, such as counselor, accountant, attorney, taxi driver, so remember not to get so busy we don’t have time to lead people to Jesus,” he warned. “We can help people with their problems, but we constantly have to remind ourselves that God called us to be fishers of men.”

BGCO Executive Director Anthony Jordan wrapped up the meeting Saturday morning by reminding the church planters that, while some people don’t think we need more churches, the fact is, if we had 300-400 more tomorrow, we would still be below what we had in Oklahoma proportionally in the 1950s.

Jordan, looking at the example of the Church at Antioch in Acts, said he sees six characteristics of church plants.

“The Church at Antioch was a Gospel proclaiming church,” he noted. It was a connecting church that didn’t see itself as an island. It was a discipling church. They were a giving church.”

He said he teaches people after accepting Christ to immediately start tithing.

“They were a sending church that sent out their best—Paul and Barnabas,” he pointed out. “Some churches will send out their least best, but we see that barely after a year in existence, this church was ready to plant churches.”

During a testimony time, new church planters told of how God is working in their areas.

“If we wait on God, He always provides,” Gragg said. “We needed a concrete floor in our building, and a guy gave us a check for the concrete. He sold his roping steers to pay for the concrete. But we didn’t have anyone to put it in. The next Sunday, we had some visitors who were in the concrete business.”

Rusty Gunn, pastor of A Church That Matters in Sand Springs, started the church in his living room in September of  2010. In 2011, the church baptized 56.

K.J. Jackson, pastor of New Beginnings Community Church in Tulsa told of Interstate Realty Management turning over apartment complexes to the church, which will start churches in each of the complexes.