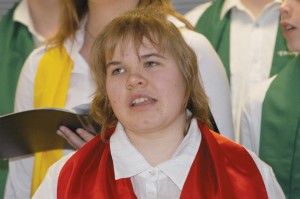 Little Elina was helpless and her mother, Inguna, was hopeless. Inguna had put 18-month-old Elina to bed one night as a healthy child. But when she awoke, she was partially paralyzed. Doctors said she had a brain tumor, needed immediate surgery and might die.

Inguna Gruznina had nowhere to turn. She lived in Latvia, which was one of 15 Soviet socialist republics. Christianity was prohibited. Pastors were killed or sent to Siberia. Atheism was the religion. Three generations had grown up under communism, and Inguna was a third-generation communist.

“I knew nothing about God, and there were millions like me in the Soviet Union,” she said.

But when her daughter was gravely ill, Inguna, for the first time, thought about life . . . and death.

“I had heard in ancient times, people baptized their babies as soon as they were born, so if they died, they would go to Heaven,” said Inguna. “I thought I should have Elina baptized, so I took her out of the hospital, found a pastor and asked him to baptize her. He said he would, but he told me a child of God needs godly parents, so we should start going to church.”

Inguna told the pastor she had seen baptisms in movies and the babies always wore beautiful white dresses, but she didn’t have a beautiful dress for Elina.

“He told me God doesn’t look at the dress, but into the heart,” Inguna recalled.

Inguna said the church were Elina was baptized was empty and dark, but it was there she prayed the first prayer of her life.

“I told God if He were real and saved Elina’s life, I would serve Him,” she said.

Elina survived the surgery, but the tumor was malignant, and doctors said she would need another surgery and would die by the age of 6.

Elina spent six months in the hospital and left in a vegetative state.

“She was helpless, and I was hopeless,” Inguna said. “I knew each day brought me closer to the death of my child.”

Then Inguna’s life changed. The iron curtain fell in 1991, and American missionaries came to Latvia.

“I had been taught that America was the enemy,” Inguna revealed. “Its goal was to take over Russia and kill us. All of our schools gave military training, and we were ready to defend ourselves against the Americans. But instead of guns, these Americans carried Bibles. They were loving and kind.”

A Baptist from Arlington, Texas invited the Gruzninas to church.

“I met so many kind people, I started going to church,” Inguna said. “However, I didn’t get much out of it; I didn’t get the message of Jesus.”

Then someone invited her to join a discipleship training school led by American missionaries.

“There I learned the story of Jesus is very simple and true,” she said. “During my quiet time, I invited Jesus into my heart as my Lord and Savior. Jesus took my fear away. I was no longer scared about the death of my child. Jesus told me my child wasn’t going to die at the age of 6.”

Elina continued to improve, but she was still handicapped, and in Latvia, handicapped children were considered second class, Inguna said.

“I knew my child would face a terrible future without education or friends,” she said. “Then I remembered my first prayer; I had told God I would serve Him. I asked Him how I could do that, and He gave me the dream to start a school that would embrace handicapped children.”

Inguna said she had no money, education or experience, and her family life was becoming difficult because her husband, Maris was against her church activities.

“I tried to tell him about Jesus, but he felt God and the school were more important to me than he was, and he was moving down the list of my priorities,” Inguna remembered. “He said he would divorce me if I started the school.”

Broken, Inguna ran into the bedroom, got on her knees and told God everything was His.

In 1993, the Gruznina family came to the United States so Inguna could study for a year before opening the school. Maris came, Inguna said, because he wanted to see America.

“He saw a Christian society and people who went to church because they love God,” she said. “Our lives were changed when he accepted Jesus at Green Acres Church in Tyler, Texas. The Christian school then became our dream.”

That dream became a reality when, on Sept. 1, 1995, the Talsi Christian School was opened with 37 children in grades 1-4. Each year, one more grade was opened, and there are now 205 students in grades 1-12 with 35 teachers and staff.

The school is more than just a place to receive an education, although it is accredited by the Latvian Education Department. It is handicap-friendly, and students attend who are almost deaf, almost blind, mildly retarded, amputees, poor, as well as those who are relatively wealthy for Latvia and the academically gifted.

Children’s monthly church services were started by TCS as a new Christian tradition in Talsi. These services are widely attended by public school students, teachers, parents, relatives and church members.

Inguna said Maris is an invaluable help with the Christian school.

“He even serves as pastor of a little country church in Latvia,” she said. “God changed our lives from godless atheists to willing servants through Talsi Christian School.”