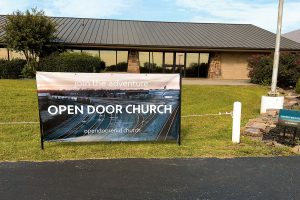 ENID—A new church was added to the family of Oklahoma Baptists on Sep. 16 with the launch of Enid, Open Door. An excited group of 237 people filled the auditorium of the Oklahoma Bible Academy, and one person made a profession of faith in Christ. With a desire to reach the nearly 28,000 unchurched in Enid, church planters Kevin and Meagan Hisey started by simply getting to know their neighbors in the community.

God put a burden for church planting on the Hiseys’ hearts in 2000 when they helped start a church in Tulsa. In January 2016, during time of fasting and prayer, God made it clear to the Hiseys that it was time to contact the Baptist General Convention of Oklahoma (BGCO) Church Planting Group. Hisey said, “God made it really clear that Enid is where we should go, and there’s a need there.” For the past 18 months they’ve been training, gaining support and laying groundwork. The Hiseys moved their family of seven to Enid 15 months ago.

The Hiseys have been blessed with financial support from several sources including the BGCO, Cherokee Strip Association and sponsoring church Claremore, First. Several churches and church plants gave gifts to help with launch funds. Twenty individuals personally support the Hisey family and view them as missionaries to Enid.

Hisey said, “A local church even gave me a free office in their church, and that helped so much. I don’t think existing churches realize how much they have to offer church planters—resources like microphone stands and prayer and allowing us to come to their church and tell our stories.” 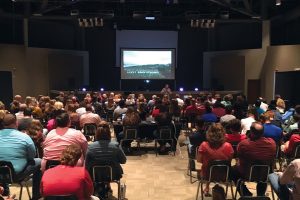 At Open Door’s Sept. 16 launch, 237 people were in attendance with one person making a profession of faith in Christ. [Photo: Chris Forbes]

Wade Burleson, pastor of Enid, Emmanuel offered his support on Facebook stating, “Wishing you guys God’s grace and blessings this Sunday and for the years to come, Pastor Kevin! Praying you reach many in Enid and the surrounding area, and for a long and fruitful ministry, impacting people for Christ’s Kingdom.”

Hisey has also benefitted from an intentional coaching relationship with Kyle Megenity, pastor of the four-year-old church plant Ponca City, NewPoint. Megenity was assigned to Hisey through the BGCO Church Planting Group.

Hisey noted, “Kyle is very different from me, but he was exactly what I needed. God lined up our relationship. Kyle is three years ahead of me in planting and has a perspective that I don’t have. He is always encouraging me because church planting is hard. He and his church are praying for us. We talk for over an hour about every other week, and once in a while we meet face to face. We’ve gone to several conferences together. He has met with my leadership team to encourage them.”

NewPoint was initially supported by sponsoring church Ponca City, Cornerstone as well as Kay Association and Ponca City, Northeast. Raised in Ponca City, Megenity and his wife Cheyenne have a burden for the unchurched in the Ponca City area. They partnered with the BGCO Church Planting group in 2014. The church launched quickly on Easter Sunday 2015. 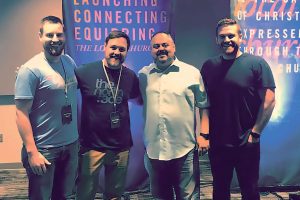 While Hisey was coached by Megenity, the Church Planting Group assigned Rusty Gunn, pastor of Sand Springs, Church That Matters to be Megenity’s coach. Megenity stated, “The most valuable resource the BGCO has provided me is in coaching. We would not be where we are if it wasn’t for the partnership with Rusty. To be able to have someone to talk with, to make sure you’re on track, to navigate the blind spots that you can’t see. At the time, Church That Matters planted three years before we planted. Having someone who was a little ahead of us helped us traverse the path they just walked.”

Megenity has followed the same model with Hisey and Open Door. Both leadership teams have met and are a resource and support. Megenity noted, “It’s huge that the BGCO Church Planting Group connects church planting pastors as coaches to help multiply healthy life-giving churches.” NewPoint has baptized 94 people and averages nearly 300 weekly with two services.

Gunn now serves as the director of coaching for the Church Planting Group and coaches four Oklahoma planters. He organizes and oversees the coaching ministry to all BGCO church planters.

Jimmy Kinnaird, BGCO church planting specialist, said, “Aside from proper assessing for church planting, the most important part of successful church planting is good coaching. New churches (www.newchurches.com) conducted research through LifeWay Research on 601 planters over 4 years and discovered that planters who had coaching doubled their plant size.”

Hisey not only has a desire to coach other planters himself but desires to start other churches. From launch day, Open Door will give through the Cooperative Program.

Hisey noted, “We don’t want to just start a church, we want start a movement of church planting in this area. We’re already praying about our next move.”

For more information go to www.bgco.org/ministries/church-planting.