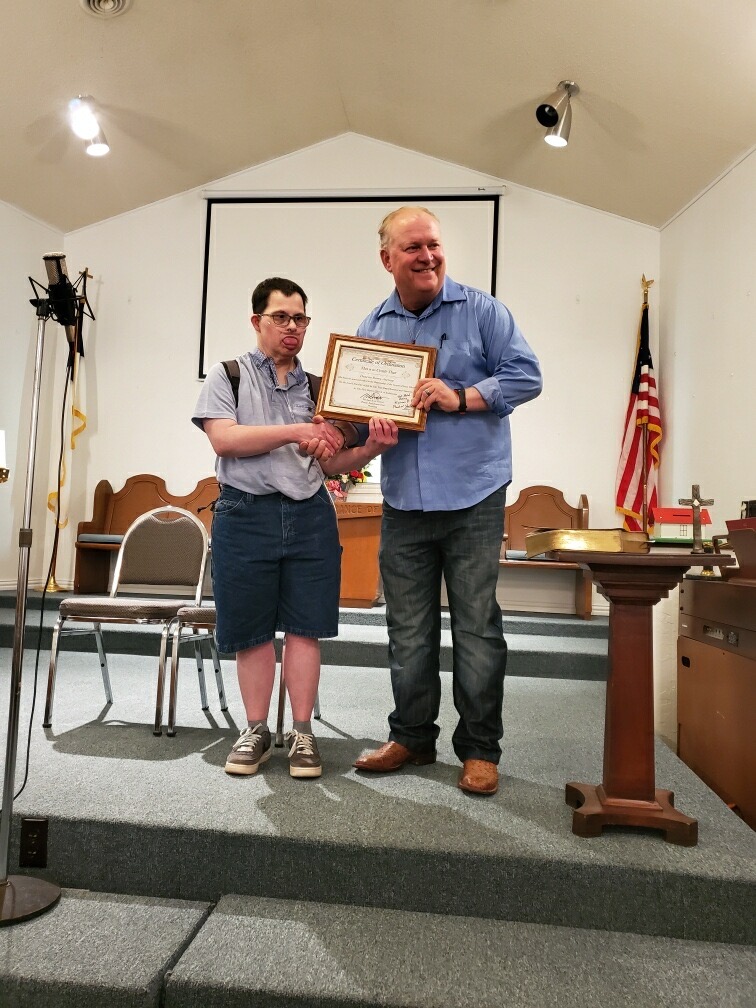 As pastors, we love to lean on the adage of “He doesn’t call the qualified; He qualifies the called.”

I’m reminded of 1 Pet. 5:10 “After you have suffered for a little while, the God of all grace, who called you to His eternal glory in Christ, will Himself perfect, confirm, strengthen and establish you.” 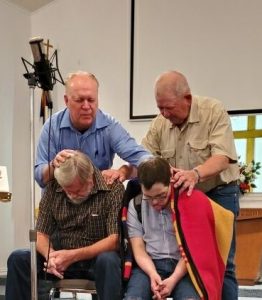 Barry Asenap, bottom right, participates in a deacon ordination service. Pastor Scott Patton, top left, is one of the church leaders who prays over the men being ordained.

God’s calling is unique, but the one constant is we never know who and how he will call his servants. I had been praying that the Holy Spirit would call one or possibly two men to serve as deacons in our church. I had made the petition public and had spoken to several men about possibly becoming deacons.

One day during a church fellowship meal, a church member approached me with a private issue he wanted to discuss outside.  This is not uncommon for pastors, but the person wanting to speak with me in private is unique.  Barry Asenap is not your typical 51-year-old.  He has been living with Down Syndrome. Although he is 51, you would mistake his appearance to be much younger.

Despite his outward disability, Barry is an absolute mainstay in our congregation. Barry and his mother Margala have embraced the stalwarts of servanthood. When you see Barry, you see Jesus, and when you hug him you feel the presence of the Holy Spirit. To say Barry is beloved in our congregation is an understatement. 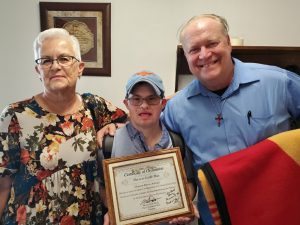 Barry with his mother Margala and Pastor Patton who is holding a Native American ceremonial blanket that was a gift to Barry.

When we stepped outside for our private conversation, I could see in Barry’s eyes that he had an extremely heavy heart, and he was anxious.

He grabbed my hand and said, “You have been asking people to be deacons. I prayed. I will be your deacon.”

At first, I didn’t completely understand him.  And I asked for clarification.

Barry said, “Like Jay Dee (one of our current deacons), Jesus told me to be a deacon.”

Then the Holy Spirit slapped me on the head and said, “Seriously, who are you to question My call? Barry meets the requirements of 1 Timothy better than you!” 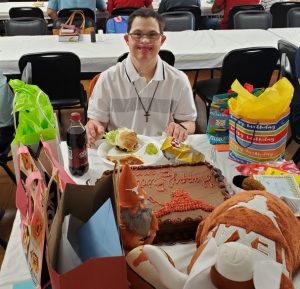 Every year, Indiahoma, First celebrates Barry with a “Birthday Bash.” The celebration this year raised more than $1,500 for scholarships for students to attend summer camp at Falls Creek Baptist Conference Center.

The church’s response was overwhelming. We had an ordination council. Barry brought his testimony before the church. After a moving service, he was affirmed unanimously.

Barry’s call to servanthood through the deaconship is just getting started.  He also serves as our church sergeant of the arms, assists with the small group attendance sheets, and he helped launch our “Whose Your One” campaign with a social media commercial.

In September, he helped the church raise more than $1,500 for Falls Creek Scholarships, during the annual Barry’s Birthday Bash.

God created and shaped Barry for His purpose and strategically placed him at Indiahoma, First, and we are so blessed to have him.

Scott Patton is pastor of Indiahoma, First and a 28-year Army veteran.

View all posts by Scott Patton