Cancer is opportunity for ministry to Decker 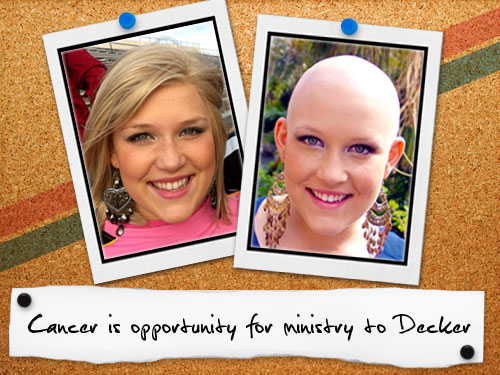 Then you should give Lorelei Decker a bottle of nail polish.

Every week, the Oklahoma City Putnam City North High School senior paints each of her nails (both finger and toe) with a different color polish to remind her to pray for the people who gave her the polish as they pray for her.

Lorelei is probably the one who needs the prayers most. In January she was diagnosed with Stage II Hodgkin’s Lymphoma, and is in the midst of 12 chemotherapy treatments  every two weeks, which will be followed by a month of radiation.

“Lorelei has always believed prayer is the most healing thing you can do,” said her mother, Andrea.

To be around the 17-year-old, you would have a hard time believing she is sick. She will go through graduation ceremonies May 20, after finishing class work early. She will enroll at Oklahoma State University in the fall as a sophomore, because of the extra credits she earned in high school. She plans to move into the dorm just a week after completing radiation treatments.

As co-captain of the PCN golf team, she plays in two tournaments a week, walking the 18 holes and carrying her own clubs.

She is an officer in Panther Pals, an organization whose job is to encourage middle schoolers to look forward to coming into high school.

She was crowned sports homecoming queen on April 13, and attended the senior prom on April 28.

Lorelei is part of the leadership team for her youth group at Oklahoma City, Cherokee Hills, and participates in Bible studies on Tuesday nights. On Wednesday nights, she helps lead worship for the group.

On Thursdays at 5:30 p.m., she helps lead Fellowship of Christian Athletes at PCN.

She recently threw out the first pitch at a Seminole State University baseball game,  where the admission price was a bottle of nail polish, and on April 24, she was coach of the Oklahoma City Thunder basketball team for a day.

Her mother said Lorelei was struggling with breathing, was coughing and had lung issues, when doctors finally discovered an 11 cm. tumor composed of many lymph nodes on the top of her heart, pressing on her lungs. Her type of cancer has an 80 percent cure rate.

“Within nine days of the diagnosis, she started chemotherapy,” said Andrea. “That is unheard of to get it done so quickly.”

Andrea said she had no idea how to be the mother of a child with cancer.

“I didn’t know how to choose an oncologist, but I felt if I heard the name of the same doctor from three different people, that would be the one,” she related. “Lorelei’s surgeon recommended a doctor I had heard about from two others. I found out he was a Christian and prayed for his patients, but when we called for an appointment, we were told he doesn’t take patients younger than 18, because it takes a certain mind-set and maturity to beat cancer.”

But it turns out the person making the appointments for the doctor is a member of Cherokee Hills and had been praying for Lorelei, and when she discovered it was Lorelei needing the appointment, she made arrangements for her to see the oncologist.

“That’s the way God has worked through all of this,” Andrea said.

Andrea added that Lorelei has come into a celebrity status being in the middle of her senior year and in leadership roles.

“There are 2,000 students at Putnam City North who know Lorelei is a Christian, and they have seen her take something devastating and turn it into a blessing,” she noted. “Lorelei’s first questions were, ‘Will I lose my hair, and will I be able to have children?’ But her focus has changed, and God moved her in a totally new direction.”

“My views have changed,” echoed Lorelei. “I see every part of my day as an opportunity for ministry.  I would never have thought being diagnosed with cancer would make you realize how blessed you are. I now look for blessings. I don’t have side effects, other than losing my hair. There is no explanation for that. I claim John 14:27 as my verse. It says, ‘Peace I leave with you, my peace I give unto you. Let not your heart be troubled, neither let it be afraid.’”

Not only has Lorelei received blessings; she has been a blessing.

During one of her chemo treatments, she had a visitor; a man whose daughter she used to babysit. He recently became executive director of the Leukemia and Lymphoma Society, and came to ask Lorelei to represent the society as someone experiencing lymphoma. He was quiet and attentive as he spent 90 minutes with Lorelei, members of her family and her visitors, including her Sunday School teacher.

He later said those 90 minutes changed his life.

“I’ve been an agnostic for 10 years, but my wife and I are talking and we plan to go to church Sunday,” he told the Deckers.

“She realizes if something is trivial, but important to you, God cares,” she noted. “Her message to those stressed out is to take it to the Lord. No hurt is too trivial.”

Lorelei added that she has had to work hard not to feel victimized, but the Lord has given her a compassion for others and what they are going through.

Lorelei said her blond hair was her identity and losing it gives a whole new meaning to “bad hair day.” Yet the Lord has blessed in acquiring wigs to wear until her hair grows back.

“The first wig I got was a short blonde one,” she said. “I placed an order for a fancier one, especially to wear to the prom, but it kept being put on back order. Because I wasn’t going to have it in time for the prom, the wig shop gave me a $500 wig. Then I received a brunette wig from Make-A-Wish Foundation.”

Coaching the Thunder for  a day is part of Make-A-Wish, which Lorelei’s mother nominated her for.

“I always envisioned Make-A-Wish as a dying 4-year-old going to Disney World,” said Lorelei. “My attitude was ‘I’m going to beat this,’ so I don’t need it. But I love the Thunder, and realized I could turn it into an opportunity for the Lord. I got to go to the coaches meeting, practice with the players, eat lunch at the coaching facilities and warm up before the game with the players. I was court side, but not on the bench with the players during the game.”

Lorelei was also interviewed on television during the game. (By the way, the Thunder beat the Sacramento Kings that night)

The middle schoolers, who Lorelei works with, sold lime green T-shirts, the awareness color for Hodgkin’s Lymphoma, which people wear on the days Lorelei has chemotherapy. They also had a dance to raise money for medical bills.

Lorelei was saved when she was 7, after being involved in the “Red Book Club” at Cherokee Hills.

“We had picture books just for kids that told about Jesus, and I realized for the first time, that Jesus wasn’t just for adults,” she recalled. “I told my mother I wanted to received Jesus, and we prayed in our van in a doctor’s parking lot.”

Lorelei said she was terrified when she first learned she had cancer.

“No one wants to get cancer when you’re 17,” she said. “I never questioned, however, that the Lord would protect me. I don’t have a choice right now, so I want to use my circumstances to glorify God. If God can use this journey in my life to speak to just one person and change their eternity, it is worth it.”