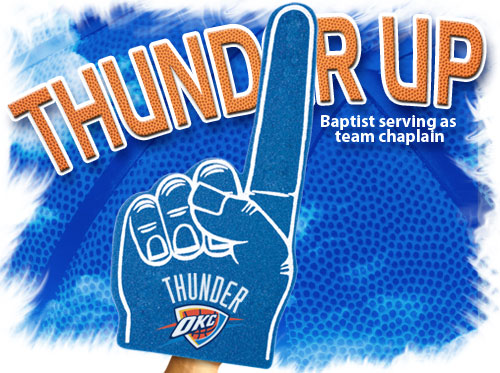 As a young boy, Cedric Hardimon dreamed of someday playing in the NBA. Little did he know that God would place him in ministry to NBA players.

Today, Hardimon, 31, is chaplain for the Oklahoma City Thunder.

“I have always had a passion for sports,” he said. “I got a scholarship to play college football (out of state), but my senior year, I felt God calling me back home (to Oklahoma).”

In addition to playing sports all his life, Hardimon is a talented musician.

“I was privileged to come home (to Oklahoma) with my wife, Megan, and get a job with Bethany, Council Road,” he shared.

Hardimon, who now  is recreation minister at Moore, First, was cross-cultural pastor and in the recreation ministry at Council Road. It was from that point that God opened the door with the Thunder.

“At that time the Seattle Super Sonics were moving to Oklahoma City, and they were filling positions including for chaplain,” he said. “Someone connected to Council Road recommended me and knew the organization was looking for people doing out of the box ministry.”

After several days of intensive interviews, Hardimon landed the job with the Thunder. He is now one of two team chaplains.

“As chaplain, it is his job to be a spiritual mentor to the players, coaches and organization’s personnel,” he said.

“We hold chapel before the games, and it is completely voluntary,” he said. “Players are not required to attend, but the Thunder has a high percentage of the team show up compared to other NBA teams, I believe.”

Hardimon has been a Christian for more than half his life, but he remembers what it was like to be lost.

“I was 15 when I accepted Christ,” said Hardimon. “I went to Falls Creek thinking I would just get to play basketball with my friends from (Oklahoma City, Brookwood) church. I went there, and then accepted Christ,” he said.

Hardimon is amazed at how God has brought him full circle. During week three of Falls Creek this summer, Hardimon will be leading worship.

Hardimon is always amazed to see how far people can come. That includes the  Thunder.

“I have been part of the team since the beginning. There was a time when we were 1-12 (record),” he said. “At that time, we did not have a lot of players coming to chapel. We are the chaplain for the Thunder and the away team for the whole arena.”

“The other chaplain is older, and I think he is looked at as a father figure,” he said. “This group is very young, almost college aged, even though they are not in college. It is like a college young group in some ways. The team calls him ‘pastor’ and call me ‘Ced.’ I talk to them like ‘Ced,’ not so much as a guy from the pulpit.”

Hardimon uses various ministry tools, such as the popular ‘I am second’ video testimonies (www.iamsecond.com).

“I showed the Tony Dungy video (from IAmSecond.com) and brought his book. That really resonated with some of the players,” he said.

“NBA chaplains are ministering to a hard group in some ways,” he added. “When you are at a low point, it is often easier to see the need for God. NBA players, though, can have almost anything they want.”

“The Thunder has a great group of guys, ones that are very humble, but we still remind them that everything they own—their talent and money—is on loan from God,” he said. “We talk about being humble and having good character.”

As a huge basketball fan, Hardimon feels honored where God has placed him.

“I think of the verse where God will give you the desires of your heart. Growing up, I knew I wanted to play in the NBA. Where I am at now, being able to be chaplain for the Thunder, being plugged into the local church, doing my music, but still having a piece in the NBA—it is awesome.”

As a Christian, Hardimon hopes to continue—win or lose—to reflect the grace and love of God.