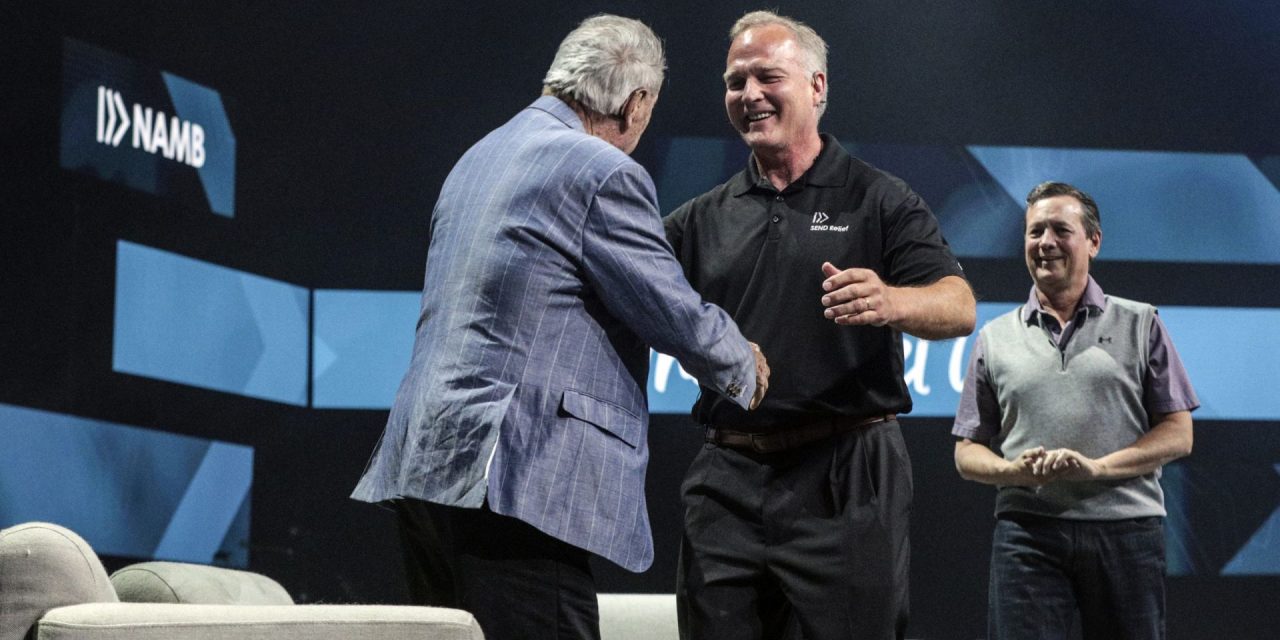 NASHVILLE (BP) – Bobby Bowden, the legendary Florida State University football coach, made a surprise appearance at this year’s Send Luncheon hosted by the North American Mission Board (NAMB). The unannounced visit came as Mark Richt, a longtime assistant to Bowden at Florida State, shared how his former boss led him to the Lord.

“What would you say to coach Bowden if he were here today?” NAMB president Kevin Ezell asked Richt. 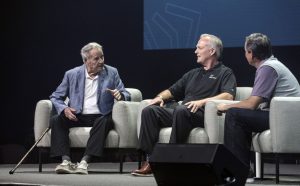 As Richt began to answer, Ezell interrupted, “You know what, why don’t you tell him in person?” and lights came up on a darkened corner of the stage to reveal Bowden.

“You snuck up on me, coach,” Richt said, embracing Bowden. “How’d you do that?”

“Well, that’s how you did me,” the 90-year-old coach said as they began reminiscing during the interview, which was preceded by a mini-concert by recording artist Matthew West to kick off the luncheon. 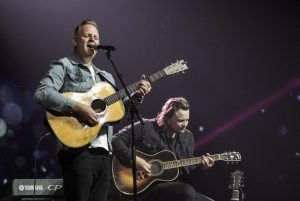 During the Send Luncheon, Ezell, International Mission Board (IMB) president, Paul Chitwood, and Bryant Wright, president of Send Relief, announced that Richt would be a national spokesman for Send Relief, the Southern Baptist compassion ministry.

“You’re the first person we’ve asked to be a national spokesman for Send Relief, and it’s not because of the way you coached but by the way you lived your life,” Ezell said.

Bowden was known during his coaching career for his ardent Christian faith. NAMB wanted to share his and Richt’s stories as a way to demonstrate the fruit of evangelism and discipleship and the reverberating impact that can be made.

“That’s what makes the world go around,” Bowden said. “If we don’t go out and talk about Jesus, how is the world going to know?”

When Ezell discussed the tens of thousands of people Bowden influenced during his lifetime, Bowden talked about his gratitude for those who did come to faith.

One of those, of course, was Richt. During the luncheon, they reflected on Richt’s opening press conference after he took the job at Georgia. He discussed his faith with the media, and Richt’s testimony touched a budding, 25-year-old reporter in attendance.

That reporter, Todd Unzicker, eventually had the chance to talk one-on-one with the coach. Richt prayed with him, changing the trajectory of his life. After serving in several different ministry roles, Unzicker recently became executive director of the Baptist Convention of North Carolina. He stood from the audience to share his testimony.

“Some few years later, I received Jesus as my Lord and Savior from watching you and your testimony,” Unzicker said. “I remember sharing that with you in your office, and you said, ‘Well, coach Bowden prayed with me in front of his desk,’ and I remember that day, you walked around your desk and prayed with me.”

After discussing the process of multiplication through discipleship with Bowden and Richt, the luncheon turned to the story of how one church in Tennessee, Red Bank Baptist Church, blessed a bivocational pastor, Zach Lloyd, who nearly died after contracting COVID-19.

Lloyd, who worked at Lowe’s and pastored Lafollette Baptist Church, had to undergo serious medical treatment to keep him alive before he received a double lung transplant at Vanderbilt University Medical Center in Nashville. Sam Greer, pastor of Red Bank, led his church to help the Lloyd family cover the cost of their mortgage payment for several months.

Before introducing Lloyd to the stage, Ezell and Tennessee Baptist Mission Board executive director Randy Davis spoke with Greer, who said that he wanted to rally his people during the pandemic season to be the church for a fellow pastor and church in need. Davis pointed them to Lloyd.

“Great kingdom work cannot be done without relationships like this,” Davis said of the Tennessee Baptist Mission Board family that enabled these believers to love one another. “It’s all about relationships.”

Lloyd then came out on the stage, where he was surprised by the Vanderbilt medical team who cared for him while he was in the hospital for nine months. They shared how Lloyd had impacted them while he was a patient.

When Ezell asked the medical team to give Lloyd an update on his medical bills, they answered:

But the surprises didn’t stop there for Lloyd and his family. Davis, on behalf of the Tennessee Baptist Mission Board and Send Relief, presented Lloyd with a check to cover out-of-pocket medical expenses. Just then, Richt threw a red challenge flag as if he was still on the sidelines of a football field and playfully recommended that Southern Baptists could do even better than that.

Because of the thousands of miles on the family car put on by Lloyd’s wife Sara’s countless drives back and forth to the hospital, Ezell told Lloyd he could trade that car for a new one free of charge at their local GMC dealership. Then, Ezell asked Lloyd about his favorite baseball team, and Lloyd shared that it was the Atlanta Braves.

Jim Allen, a vice president with the Atlanta Braves, announced in a video that they would host Lloyd and his family for a Braves game where he could watch from on the field during team batting practice.

Through tears, Lloyd described how much he loved his church family, who prayed for him every Saturday morning for months.

“I’m so grateful for my church family. I’ve been there 17 years. I was there as a youth pastor, and God made a way for us to become pastor there,” Lloyd said. “I love them so much. They’re family. That’s something we really try to promote is family, and I love them. They’ve been so supportive of me.”

That sense of family among Southern Baptists is what NAMB attempts to celebrate and put on display at its luncheon each year.

Ezell closed the event by asking Southern Baptists to continue praying for Lloyd who is heading back to the hospital this week for organ rejection treatment.