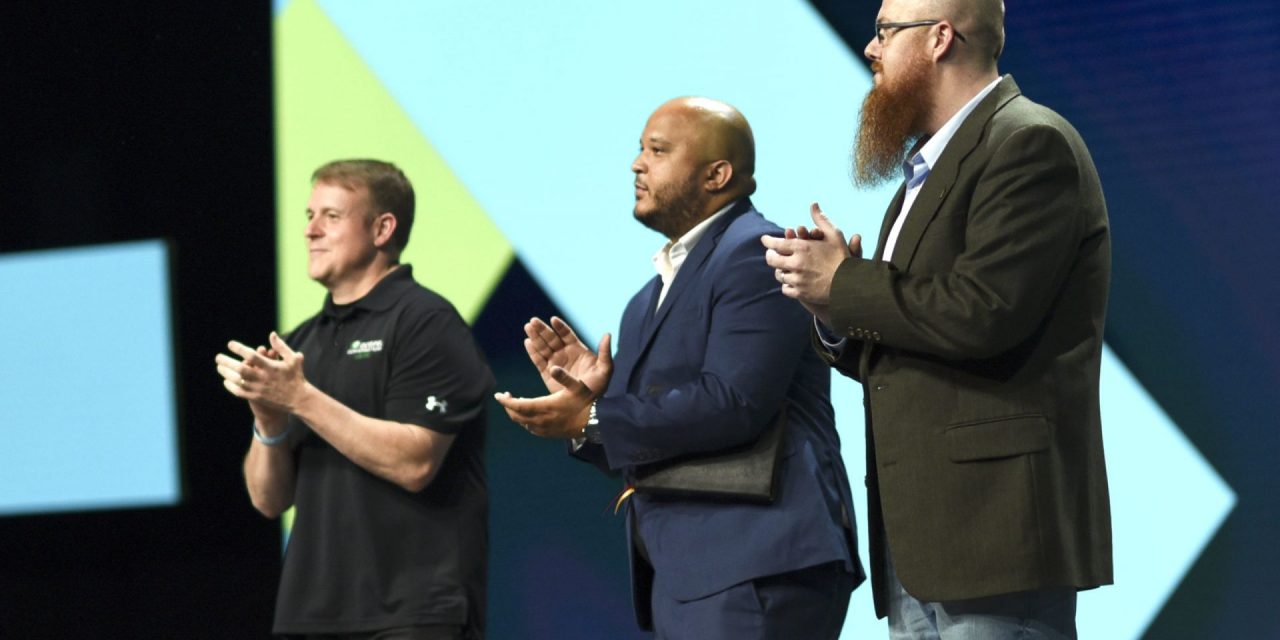 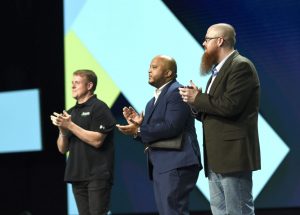 Officers for the 2022 SBC Pastors’ Conference were introduced at the end of the Send Conference June 14. From left, they are Treasurer Sam Greer, Vice President Cam Triggs and President Matt Henslee. Photo by Karen McCutcheon

The 2022 Pastors’ Conference will precede the SBC Annual Meeting in Anaheim, Calif.

Josh Reavis, associate pastor of Jacksonville, Fla., North Jax, described Henslee’s ministry experience as being representative of most Southern Baptist pastors. Mayhill is a town of 56 people where the nearest McDonald’s is an hour away. Each Sunday Henslee goes through the progression of turning on the church lights, starting the coffee and praying over the 30 pews that will soon hold more than 100 people.

“It’s what he does every Sunday—Sunday after Sunday—because he’s a pastor,” Reavis said. 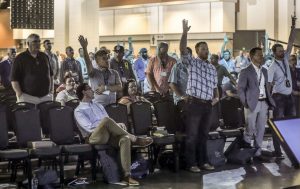 Southern Baptists pastors voted June 14 at the IMB/NAMB Send Conference in Nashville to select officers for the 2022 SBC Pastors’ Conference, which will be in Anaheim, Calif. Photo by Eric Brown

The Pastors’ Conference, Reavis noted, should provide a picture of those from numerous ministry settings, including a “Who’s Who” but also a “Who’s That.” Various backgrounds on the stage shouldn’t be a novel idea, but the norm.

In addition to being a pastor, Henslee has managed social media programs for Lifeway Christian Resources and Southwestern Seminary as well as authored several books and served as co-host for Not Another Baptist Podcast. In short, Reavis said, concerns over the pastor of a small church having the skills to lead such a large-scale event as the Pastors’ Conference “is some 1990s thinking.”

“When Matt Henslee tells you that he can bring you a Pastors’ Conference that is for pastors, by pastors, he’s not guessing about what he might be able to do,” Reavis said. “He’s talking about what he’s already doing. … In God’s eyes there are no small churches and no big pastors. [There are] just churches and pastors.”

In his nomination, Fred “Chip” Luter III called Triggs “a Great Commission church planter” who has made Grace Alive Church a light in the neighborhood officially called Pine Hills, but known by many as “Crime Hills.”

“That’s what the Great Commission does,” Luter said. “It goes into some of the hardest places and changes lives and changes communities. Cam Triggs has been doing that.”

Luter, senior associate pastor of New Orleans, La., Franklin Avenue, also cited Triggs’ role as “a bridge builder.” Next year’s Pastors’ Conference, he added, can be an opportunity to show a more enduring picture of unity in the SBC.

Greer is “a motivated man to serve Jesus … with a passion to see lost people saved,” said Chuck Herring, senior pastor of Collierville, Tenn., First, in his nomination speech.

Herring said he has been Greer’s mentor for 18 years, and in that time has witnessed his dedication to spreading the Gospel, including leading Red Bank to lead in a local church replant.

“He is a young man dedicated to the Lord Jesus … and preaching the Word,” he said.

When contacted by Baptist Press after the results were announced, Henslee said: “Thank you, Southern Baptists, for trusting me and our team with the 2022 SBC Pastors’ Conference. Please pray for us, prepare to join us in Anaheim, and persevere until then. 2020 was tough. 2021 is rough. But we’ll gather together in 2022 … hold on!”