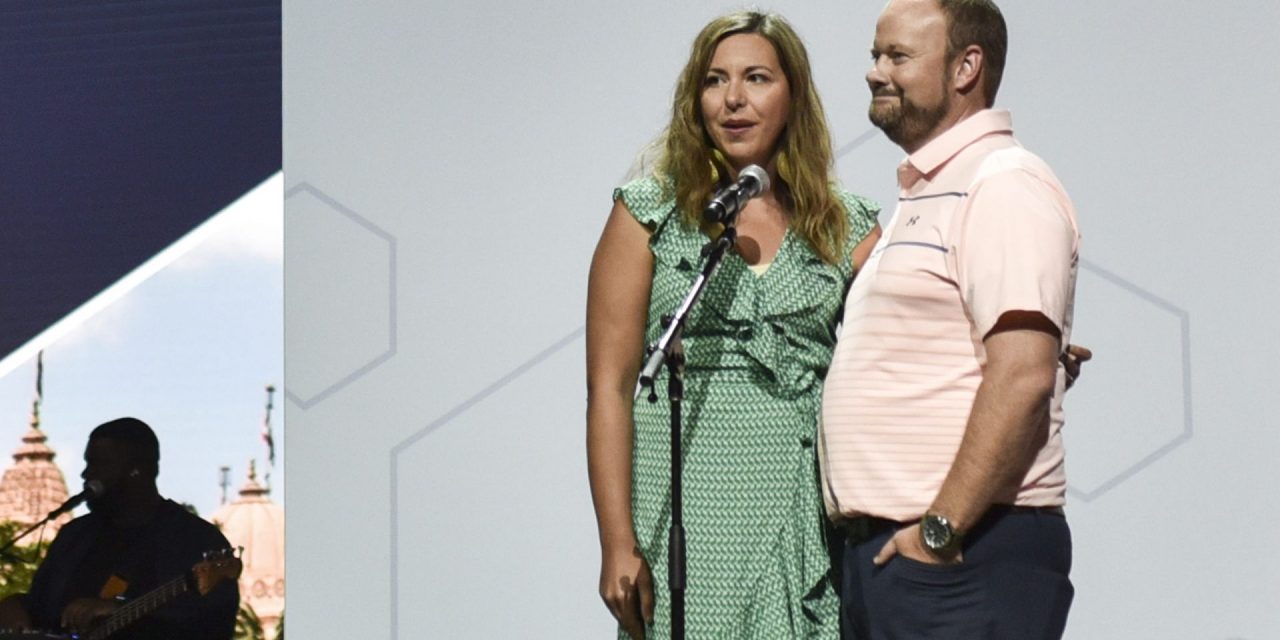 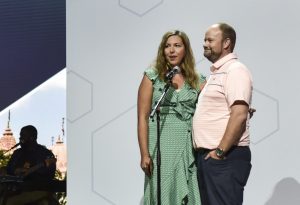 Chris and Casey Willis grew up in Augusta, Ga. They both attended Augusta, Ga., Warren and are now, as adults, being sent out by Warren as missionaries to Uganda alongside their four children. Photo by Karen McCutcheon.

NASHVILLE, Tenn. (BP)—International Mission Board (IMB) President Paul Chitwood made a confession to the thousands gathered in the Music City Center on Monday, June 14. As 2020 dragged on, he said, challenge after challenge made the IMB’s goals seem further and further beyond reach.

“I questioned at times if we would be able to do everything that is necessary to appoint, train and deploy new missionaries in the midst of a global pandemic,” he said at the IMB Sending Celebration. “But by God’s grace and with His help, your sending of missionaries through the IMB has not even slowed.

“We’ve had plenty of hurdles and more than enough disruptions, but more than 500 new missionaries have been appointed since the pandemic began… Our work has not been thwarted.” 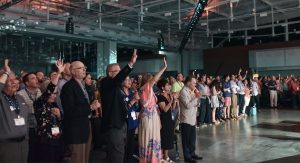 Sixty-four missionaries were presented in preparation for joining 3,631 appointed by the IMB and sent throughout the world. The vast majority of the new missionaries stood behind a screen, as they could not be identified due to security concerns in their location of service.

Several could be identified and told their stories to attendees. Brandon and Lisa Gregory will travel to Estonia this fall, where they will assist in church planting efforts. That hunger to take the Gospel to the nations began on their honeymoon eight years ago in Ireland. 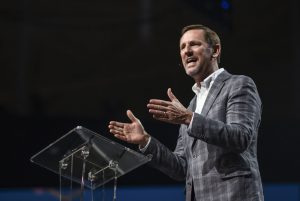 “We must be for the mission every single day – 365 days of the year,” IMB President Paul Chitwood said at the Sending Celebration for 64 new missionaries June 14. “How often are the nations on your heart? How often are you praying for the people groups around the world to hear the good news of the Gospel?” Photo by Karen McCutcheon.

“We went around on St. Patrick’s Day and could only find one person who had heard of St. Patrick, and that was a missionary,” Brandon said. “We couldn’t find a church, either. That sparked within us a desire to move to the field.”

On a visit to Brandon’s parents in Washington, they heard of the ministry at Reliance Fellowship in West Richland, 200 miles southwest of Seattle. They joined Reliance and continued in the church’s ministry while Brandon attended classes through Gateway Seminary.

One hurdle to face is learning to speak Estonian, which isn’t common outside of the country. Language training will come through the IMB, but in the meantime the Gregorys are using a variety of ways to at least hear the language and start getting accustomed to it. That includes finding Estonian music online and, of all things, Peppa Pig episodes on YouTube in Estonian for their two children, ages 4 and 2.

Chris and Casey Willis grew up in Augusta, Ga. They both attended Augusta, Ga., Warren and are now, as adults, being sent out by Warren as missionaries to Uganda alongside their four children.

The family has lived in Uganda since September 2018, having raised their own funding to work alongside an IMB team ministering among refugees fleeing war in South Sudan.

“Even before that, Chris and I had talked about how much we’d love to be a part of missions,” Casey said.

A life in foreign missions had to overcome its own hurdles. The couple married and Chris accepted a solid, steady job as a claims representative with the Social Security Administration. They had a baby, then another, then two more. Casey homeschooled them while Chris worked for 16 years with the SSA.

“We were very comfortable, but began to get uneasy that there was something else for us,” Casey admitted.

A discontent at Chris’ job also set in. Both say God led them back to having a heart for the mission field. Both went on separate mission trips to Uganda. In 2015, the couple also began working with the refugee ministry at Atlanta, Ga., Clarkston International Bible. Both say that experience softened their hearts for refugee work.

Another factor in their missions calling is their home church. Roger Henderson, Warren’s former missions pastor and former IMB trustee, went on a trip to Uganda with Chris. Before he retired, he ensured the couple would experience work in the area and into South Sudan.

“Warren has a heart for sending out missionaries,” Casey said. “They’ve been so supportive, and their culture led us to pray about entering the mission field.”

The Gregorys also noted how God had worked on them individually as well as collectively to reach this point. Lisa’s father grew up in Israel and Palestine, working as a contact with Christian missionaries. She heard those stories and felt a sense of wanting to go and serve as well.

God directed their path in numerous other ways as well through conversations with their family and friends. Brandon’s grandmother was a very influential Christian who took him to church and would read stories about the missionary David Livingstone.

Lisa Gregory pointed to a powerful example of the realization that others need the Gospel as given through the couple’s 4-year-old daughter, Amira. On the way to church one day, the drive took them by a mosque celebrating the last day of Ramadan with balloons and decorations. Amira asked about it and, upon hearing about a different religion, made a direct observation.

Chitwood urged all those in attendance to see their mission as one that literally doesn’t end and to be the one who answers Ameri’s challenge.

“We must be for the mission every single day—365 days of the year,” he said. “How often are the nations on your heart? How often are you praying for the people groups around the world to hear the good news of the Gospel?

While not everyone who hears the Word of God will be saved, he admitted, the role of the missionaries and those supporting them remains unchanged – deliver the Gospel.

“That’s why we’re here (together). Our work is not done.”