After searching for hymn on baptism, 91-year-old preacher writes it himself 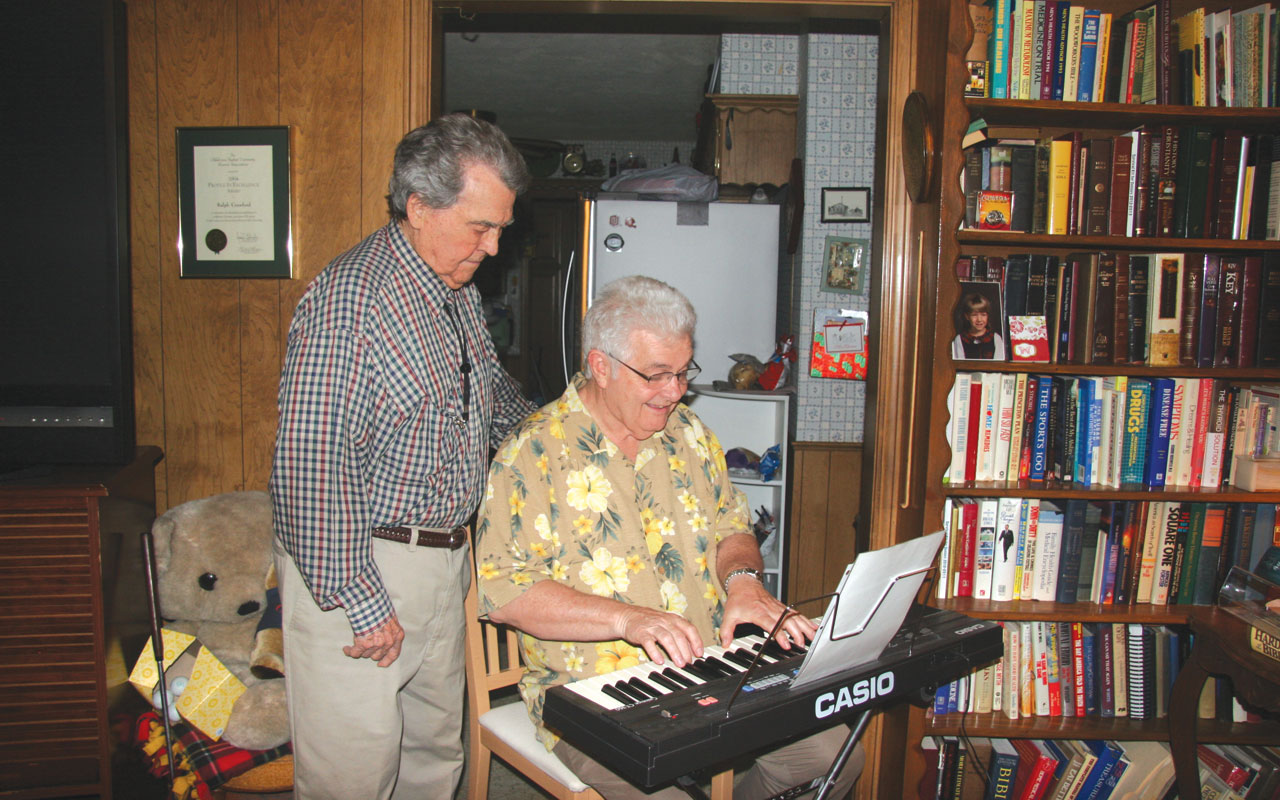 Although he was called to preach the Gospel, music has always been a powerful force in Ralph Crawford’s life.

A music minister’s dream to work with, Crawford, now 91, always said when the music portion of a worship service ran long, “I’m the variable here. We need that good music.”

And he was a master at fitting his remarks into the time allotted to him.

Crawford, who served as pastor of Oklahoma City, Olivet for 25 years, often said after a particularly moving hymn or anthem, “That’s in my top 10.”

“Of course he had at least 50 songs in his top 10,” said Crawford’s former music minister Keith Butler, who now ministers at Yukon, Canadian Heights. “One thing about Ralph is he always was ready to sing bass in an impromptu men’s quartet,” which Butler formed often at Olivet. Today, Crawford says if he were to go back into the ministry, he would “buy a men’s quartet and take them with me.”

Crawford not only loves music—has a booming bass voice and plays the harmonica—but he also has the ability to compose hymns, although he has only done that twice.

His most recent, written just this year, is a hymn about baptism.

“I’ve been looking for a hymn on baptism for years,” said Crawford. “There are hymns on almost every Christian subject, including the Lord’s Supper, but not on baptism.”

Crawford said he asked his sister Stella, a musician, to write a hymn on the subject, and she did, but he said it “didn’t do for me what I wanted it to.”

So, finally, he decided to attempt it himself.

“I threw away page after page,” he admitted. “The song had to be biblical, have rhythm and rhyme,” he said.

The four-verse hymn he came up with is “Baptized Like Jesus.” He wrote the melody line and named the hymn tune after his first great-grandson, Cooper Ryan. The first verse is about death—a picture of what baptism is, the second about Jesus’ baptism, the third is the Spirit’s credence to the picture of baptism, and the last is why we are baptized.

Previously, Crawford wrote a hymn for Olivet’s 75th anniversary in 1985. That hymn, “This Our Church,” was premiered at the anniversary celebration in a choir special arranged by former Olivet minister of music Bill Littleton. The song was revised for the church’s 100th anniversary in 2010 and renamed “This Old Church.” That hymn tune is named after his first grandson, Christopher.

One of seven children, Crawford, who was born and raised in Nowata, served as pastor of four churches before moving to Olivet in 1964 (Enid, Trinity; Ryan, First; Ada, Trinity and Del City, First Southern).

He comments that every church he pastored did better after he left. And he is proud of that.

“That’s the way it should be,” he noted.

When Crawford went to Olivet, an inner-city church, it was already in a decline. From its glory days in the mid-1950s, running more than 1,000, on Crawford’s first Sunday, there were 779 in Sunday School. A high of 939 was reached about a month later, then a steady decline occurred of about 15 per year for the 25 years Crawford was pastor with his last Sunday in January 1990 recording a Sunday School attendance of 434. He also preached 646 funerals, and performed 362 weddings while at Olivet.

Crawford described the decline as the “most discouraging and heart rending situation I’ve ever had.”

Olivet’s future could have been different. The Baptist General Convention of Oklahoma offered Olivet the land at 150th and N. May Ave. that had been the farm for the Baptist Children’s Home.

“We proposed an Olivet North on that land, keeping the current church building for Olivet South,” recalled Crawford. But the church overwhelming turned down the proposal, voting to stay “where God has put us.”

“I suggested the convention offer the land to Nichols Hills because they were landlocked and needing to relocate,” said Crawford. That church accepted the land, sold it, bought 15 acres across the street, and is now Oklahoma City, Quail Springs, one of the state’s largest congregations.

A graduate of Oklahoma Baptist University, where he met his wife, Beverly, and Southwestern Seminary, Crawford served during World War II in Italy, and it was there he made a commitment of his life to the Lord.

He has kept a detailed dairy through the years, even recording doctors who have treated him, people who visited him while in the hospital and a blow-by-blow description of his time in the Army.

After leaving Olivet, over a period of 15 years, he served nine years and nine days as interim pastor of 14 churches, two of those twice. He kept a list of what each of those interims paid him, and when asked how much he required to do an interim, he simply showed the list of what other churches had done, and said “Do what you can.”

He also has a list of 85 churches he has served in retirement as evangelist, banquet speaker, supply, interim or special event speaker, as well as the 31 revivals he preached from 1949-2011. All in all, he spent 60 years, six months and 23 days in the ministry.

Not one to leave things to chance, Crawford has also written his obituary for the newspaper. It does not include any of his life’s achievements, but is about already being in Heaven and telling others how they can join him there. He’s even got it down to 34 lines.

The Crawfords, parents of two sons, Ralph Jr. and Craig, will celebrate their 69th wedding anniversary in August. Beverly suffered a stroke a few years ago and lives in a nursing center, where Crawford visits her daily.

“She may not always know who I am, but she remembers all the songs we used to sing,” he said. “The best times we have is when we sing songs together.”

Another testimony to the power of music in his life.