Adam Mask went from being in prison to pastoring at Coweta, Community 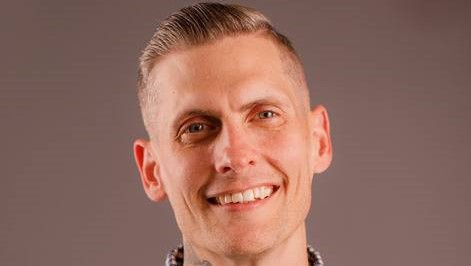 Adam Mask grew up in a loving home with wonderful parents, but it was not a Christian home.

“Although it was a loving home, Jesus was not the center of our lives,” Mask said. “My mother was a believer, who demonstrated a degree of fruits, but my father was not. I had heard about Jesus and was familiar with some of the stories in the Bible, but they were no more real to me than Aesop’s fables were.”

Mask said he loved playing football and baseball and would do so any chance he got, but when he was 13, he got involved in a different kind of recreation, which led to his life spiraling into addiction and criminal behavior.

“I tried drugs for the first time with my older brother and some of his friends,” Mask recalled. “I was a functioning addict for the majority of the time, and there would be seasons of growth and seasons of destruction in my life. But over 13 years, there was never an extended season of sobriety that would last more than a few months at most.”

Mask ended up dropping out of high school, getting his GED and joining the United States Army. He served two years in the 25th Infantry Division before his addiction derailed his military assignment. After failing multiple drug tests, he was discharged with a general discharge.

“Once I left the Army and the structure that it provided, my life began to spiral even further out of control, and I ended up being arrested for Possession of a Controlled Substance with the intent to distribute,” he admitted. “As a result, I ended up serving nearly two years in prison.”

While in prison, Mask was given a Bible, which he read in its entirety three times. However, he said, the Bible did not seem to him to match up with the world in which he was living.

“This God of love and grace seemed to have abandoned me,” he said. “In my mind, God was more like a butler. I make a mess, and He is supposed to come behind me and clean it up, allowing me to go on with my life as I saw fit. It never occurred to me that I was supposed to serve Him and not Him serve me.”

After serving his prison sentence, Mask said he was extremely depressed and suicidal. After crying out to God in a prayer, he visited Broken Arrow, First on May 2, 2010.

“God used that message preached by Pastor Nick Garland and the message the following week to bring conviction through the Holy Spirit upon my heart and confront me with the reality of my sin,” Mask noted. “On May 16, through repentance of my sin and the placement of my faith in the atoning work of Jesus Christ, I was born again. I was baptized the following Sunday.”

Mask joined a men’s Bible study, and through that group and a Sunday School class he got involved in, he was discipled. During this time, an opportunity was presented for him to go the state prison in McAlester to give his testimony. That turned into a monthly trip to preach God’s Word to the men incarcerated there.

“God began to open other doors for me to preach His Word, and I started serving the Lord at the Tulsa Juvenile Detention Center every other Sunday by preaching and ministering to the young men and women who were there,” Mask said. “I did this for a year, and then I surrendered to God’s calling on my life to full-time vocational ministry.”

In January 2013, Mask was brought on staff at Broken Arrow, First to serve as pastor of the college and career ministry and director of the newly-launched Celebrate Recovery ministry. In 2015, he became campus pastor of the church’s Coweta campus—Community Church.

“During this time, I was blessed to lead my father to the Lord and baptize him,” Mask said.

In 2020, Community Church launched out on its own as an autonomous church.

“We have seen God do exceedingly above anything I ever could have dreamed or imagined,” Mask said.

The church gives 5.7 percent to the Cooperative Program and supports a local ministry, Arms Around Broken Arrow, with monthly financial help.

“We have partnered with a North American Mission Board church plant, Morgan Grace Church in Morgan, Utah, just outside Salt Lake City,” Mask said. “This is a partnership that consists of monthly financial support and various mission trips throughout the year. We are also currently exploring a partnership with the International Mission Board in Mexico City.”

Mask said the main focus of the church in reaching people for Christ is training them and equipping them to fulfill the Great Commission within the context of their daily lives.

“We believe the greatest way to spread the Gospel is through God people in their families, their neighborhood, their communities, their workplaces, their places of activities and leisure or wherever their feet may tread,” he observed. “We also have a Kids Beach Club ministry that is a Christ-centered after-school program located in one of our local Intermediate Grace Centers. We have various outreach events throughout the year such as men’s and women’s events, VBS, Student D-Now’s as well, but the focus is primarily on personal evangelism.”

Mask has been married to his wife, Grace, for nine years. They have four children, two who are adopted—Jadyn, Ava, Tyler and AJ.

“My wife is a former educator who transitioned out of public school to serve at a Pregnancy Resource Center and has since taken on the toughest job anyone ever will have, being a stay-at-home mom and discipler of our children,” Mask said.