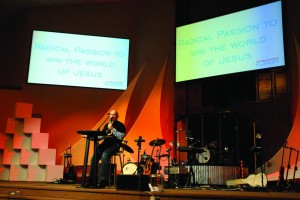 Alvin Reed was one of the speakers during the general sessions

“We didn’t want it to be just driving the idea of ReConnect, but we wanted the same emphases to be important to youth leaders in their own spiritual lives, which is connecting to Jesus and His truth, connecting people with community and His mission,” said Todd Sanders, student education specialist for the Baptist General Convention of Oklahoma.

Forum’s main speakers were Alvin Reed, professor of evangelism and student ministry at Southeastern Seminary, and Brian Mills, executive and teaching pastor at Jackson, Tenn., Inglewood, who challenged student leaders in their personal faith and how it is important for them to have their own strong community.

“You’ll never be sharpened if you are on an island alone,” said Mills. “You need healthy community.”

“Challenge: participants are challenged in their faith, personally. This happens in our general session times,” said Sanders. “Community: we connect people in relationship with one another, in ministry areas. We build rapport with those in the Oklahoma youth ministry family, connecting new faces with veteran faces. Conversation happens in breakout sessions, where we invest in leaders, opening up content about issues everybody faces. And then Collaboration is created for leaders to exchange ideas and be a valuable resource to each other.”

Breakout topics at Forum included developing volunteers, developing students, connecting students with truth (Biblical literacy), gospel-centered youth ministry, and missions. Sanders said the event is a great opportunity to allow all church leaders who work in student ministry to recharge and gain support, not only from state leaders, but also other youth leaders in churches across Oklahoma 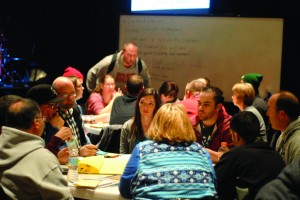 “Investing in student leaders is a major tier in what we are about in student education,” said Sanders who compared Forum to the three Oklahoma Youth Ministers Association (OKYMA) meetings that are held annually in January, April and September at the Baptist Building in Oklahoma City.

“Forum is a fourth offering,” he said. “It helps us reach bi-vocational leaders and volunteers, as well as full-time leaders involved with their student ministry. It’s a full-bodied training event, and works hand-in-hand with other meetings where they come together to participate with other leaders around the state.”

Many Forum attendees responded to the event on Twitter. Holden McCrackan, youth minister at Duncan, Immanuel, said he is “still soaking in everything he has learned,” posting his tweet a few days after they met. Aaron Swain, associate pastor of student and family ministries at Oklahoma City, Capitol Hill, said he “left encouraged with new ideas and lots to think about.”