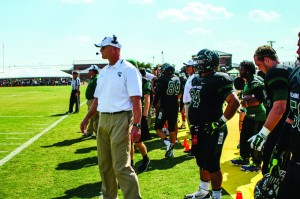 OBU Head Coach Chris Jensen led the Bison to an 8-3 record this season, collecting the school record for most wins in a season.

PLAINVIEW, Texas—The Oklahoma Baptist University football team (OBU) bade adieu to NAIA football in style on Sat., Nov. 15, clubbing Wayland Baptist 63-21 on the road. With the win, OBU tied the school record with its eighth win of the season.

The Bison took a 42-0 halftime lead with a pair of defensive touchdowns to augment an offensive attack that produced 311 yards in first two quarters. OBU ended up with 536 yards total offense (329 rushing, 207 passing).

“I was impressed with the way we came out and played in the first half,” said Bison Head Coach Chris Jensen. “We played hard in the second half, too, but we made some mistakes and allowed them to score.”

Nic Shegog put the Bison on top early, picking off a pass and going 21 yards for the score. Trey Tully added the extra point for a 7-0 lead 34 seconds into the game.

Blake Woodard passed to Eric DeLay for a 20-yard touchdown on fourth down with 1:18 remaining in the first half. OBU posted the next 28 points in the second quarter.

Woodard passed to Derek Serowski on a 43-yard score for a 21-0 lead with 14:15 remaining in the half. The quarterback shuttled the ball to Stephan Turner on another fourth down play that worked for 26 yards and a touchdown with 8:56 to go in the half to give the Bison a 28-0 lead.

Woodard threw to Serowski for his fourth TD pass of the half, dialing long distance again for a 41-yard pass play and a 35-0 score. Bryson Beattie was in the end zone 43 seconds later on a 20 yard interception return.

The Bison out-gained the Pioneers 311-56 in the first half, collecting 15 first downs along the way. Jordan Barnes went over the 1,000-yard rushing mark for the season in the third quarter during a touchdown drive that also featured a 22-yard run by Dawson Myers. Myers scored from three yards out for a 49-0 lead with 11:43 left in the third quarter.

“Our team works hard every day and rushing for a thousand yards is a team accomplishment,” Barnes said.

The Pioneers scored from a yard out to trim the lead to 63-14 early in the fourth quarter. Wayland added a final score late to make it a 63-21 final.

Brynden Pitzer paced the defense with eight tackles, including three for loss, to go with a sack.