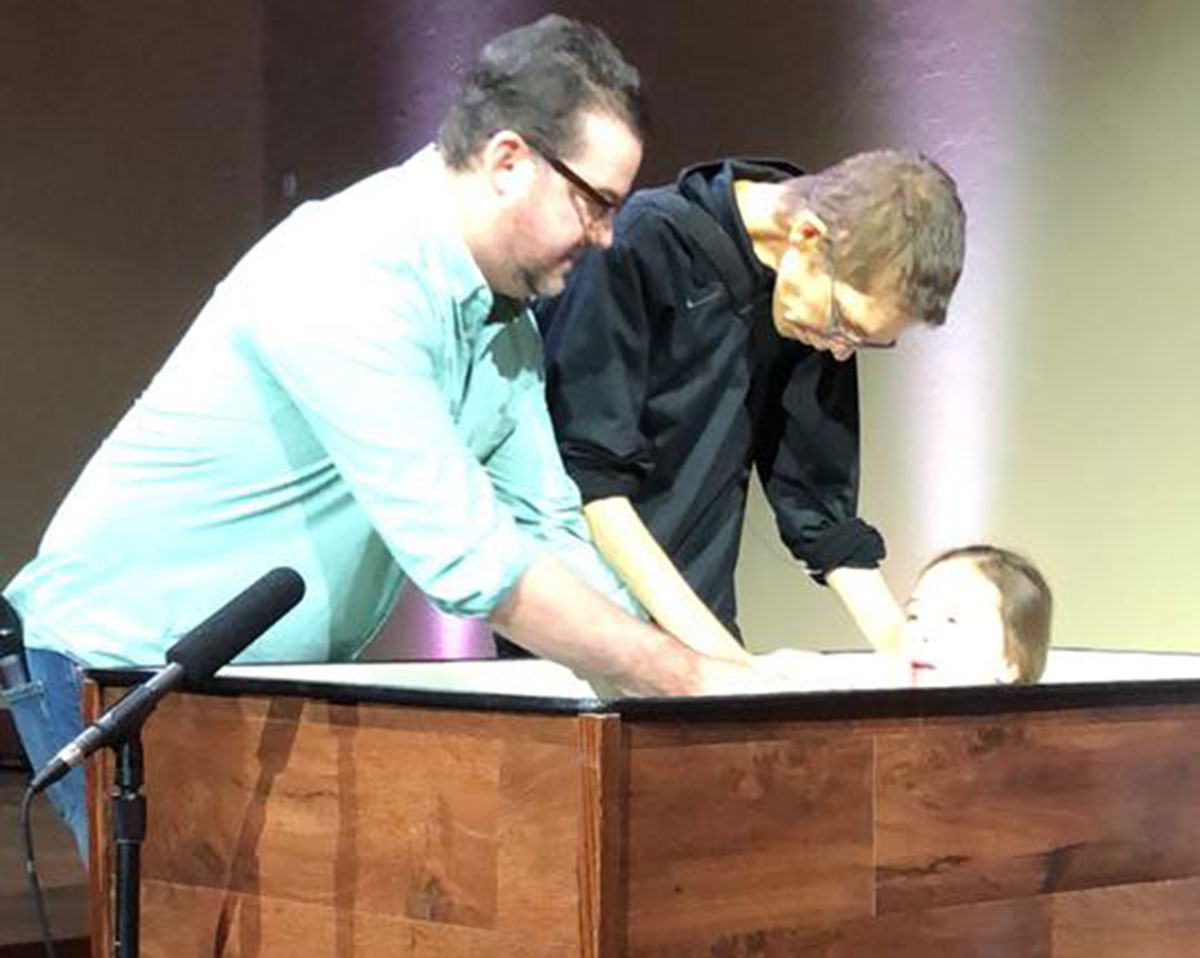 OKLAHOMA CITY (BP) — Misty Hall thought her husband Shane was uncomfortable. Confined to bed in their Oklahoma City home in the presumed last days of his battle with stomach cancer, he asked her to raise his hands.

“I’m worshiping Jesus,” he explained. As the two of them listened to Charles Billingsley’s “I’ll Run to You,” the 46-year-old pastor mouthed every word Billingsley sang: “Though my heart and flesh may fail, You’re my very present help, My tower of strength, My portion evermore.”

Shane wept and began verbally thanking Jesus, his wife told Baptist Press on Valentine’s Day. “And we just had that sweet, sweet time with the Lord, and he just worshiped,” Misty said. “That was such a precious, precious gift to me from the Lord, and just [being] with the Lord.” 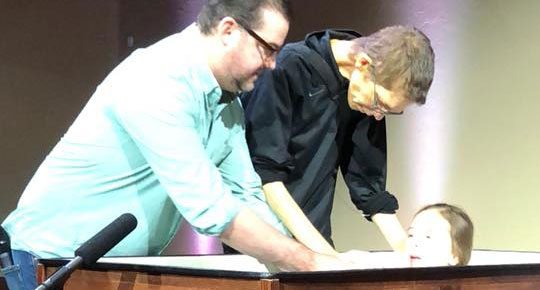 Misty’s husband, father of their two daughters Maci and Mallory, pastor of First Southern Baptist Church in Oklahoma City and a Christian deemed faithful, Hall had already lived nearly three years longer than doctors first predicted when they diagnosed his illness in October 2014. Then, as he faced his final bout with a spiking fever and failing internal organs, Feb. 14 found him alive a day past what doctors said would be his last, his wife told BP.

In what Misty describes as “truly a miracle,” God answered one of Shane’s longstanding prayers just days earlier when he was able to help baptize his younger daughter, 10-year-old Mallory, at his pastorate Feb. 11. In January, he told Misty he just wanted to live long enough to baptize Mallory, who knew the Lord and could actually lead others to the Lord, Misty told BP, but had not felt led to profess her own faith.

“I just wanted to baptize Mallory,” Shane had told Misty as the couple sat on their couch with the realization of the disease’s progression. “So, for him to say that and then to see it within two or three weeks was just a precious gift to him. I felt like, that’s what kept him here for a while, his wanting to fulfill that desire to see her come to know the Lord.” 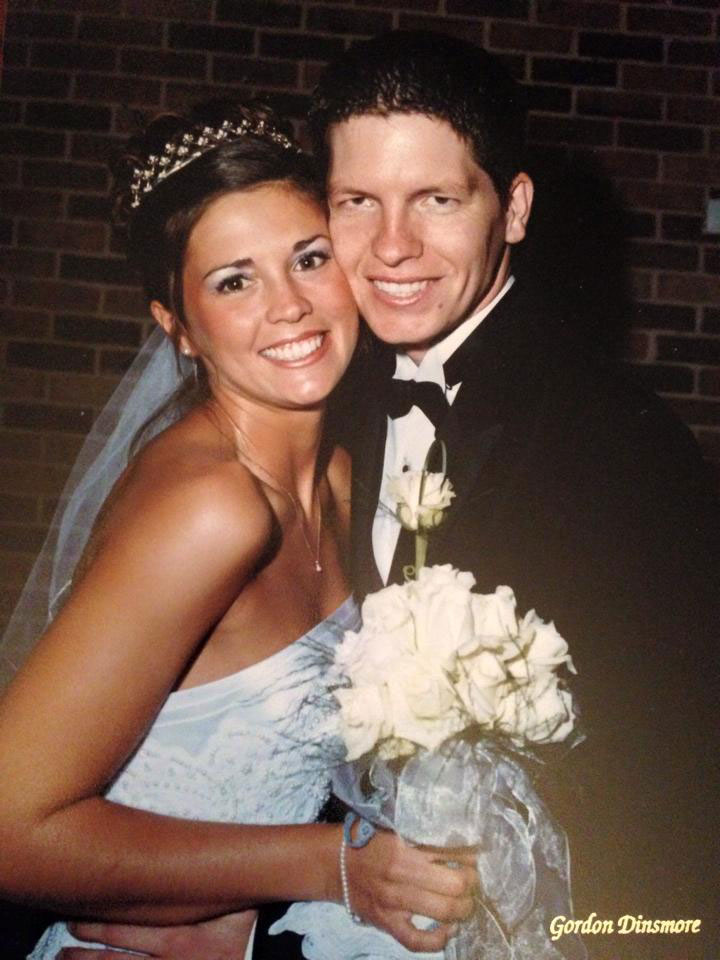 Shane and Misty Hall at their 2001 wedding.

Mallory professed her faith in Christ Feb. 7 to her mother Misty, who led her in accepting Jesus as Lord and Savior.

Misty had pushed Shane in a wheelchair into the sanctuary near the end of the worship service to allow him to assist First Southern Baptist children’s minister Neal Livingston in baptizing Mallory.

Southern Baptist executive Frank S. Page, who has visited Shane and prayed with him, called the father a hero.

“When I heard about Shane Hall’s miraculous efforts in helping to baptize his daughter, I wept,” Page, president and CEO of the Southern Baptist Convention Executive Committee, told BP. “It spoke of a father’s love. It spoke of a pastor’s determination. God bless him and his family as they continue to make a difference.”

“This is my daughter, but now she’s also my sister in Christ,” Lee recounted Shane’s words, with a lighthearted addendum: “But she still has to do what I tell her to do.”

Lee met Shane when the two were next-door neighbors in the 1980s when Shane’s father Loyd pastored a church in Burns Flat, Okla. The two remained close friends even as their lives separated them geographically. Lee joined First Southern Baptist’s staff about the time Shane first became ill but transitioned to volunteer status weeks ago, he told BP, to decrease the church’s financial obligations.

Shane Hall sits with daughters Mallory (left) and Maci in 2015.

“He’s more like a brother than a friend. … We were both the best man of each other’s wedding,” Lee said. “There are so many people that would refer to Shane as their closest friend. He just had an infectious personality and he just loved people.

“He was probably instrumental in so many people around our state that have gotten involved in leadership positions within our state convention,” Lee said, “and also the national convention. That’s just always been who he is.”

Shane began his current pastorate in 2013, previously having led churches in Oklahoma and Louisiana. He was active in Southern Baptist life and was a featured speaker at the 2017 Pastor’s Conference at the Southern Baptist Convention annual meeting in Phoenix.

“From his leadership at the state level to the SBC level, he has demonstrated a great commitment to the advancement of the Gospel,” Jordan told BP Feb. 14. “But Shane’s greatest quality has been his ability to face this great trial with an abiding faith in Jesus that has always pointed to the faithfulness of God.

“We Oklahoma Baptists have been praying continually for Shane and Misty all throughout this difficult journey,” Jordan said. “We truly treasure the close friendship and fellowship we share in the Lord.”

God’s faithfulness has carried the family through the valleys, Misty told BP.

“More than anything, just knowing who God is has helped me the most,” Misty said. “It’s been a long almost four years. I’m just resting in the Lord’s grace and His sufficiency.”