Alveda King, a woman who has fought for human and civil rights for most of her life, headlined the day that gave a voice to the voiceless—the unborn.

Prior to the Rose Day Rally, pro-life advocates of all ages arrived with bushels of roses as soon as the Capitol doors opened. Rose Day attendees were encouraged to pass out roses to their state legislators to symbolize their stance in the pro-life movement. State Bill 1267 and House Bill 3447 were two specific bills that attendees were encouraged to bring to the attention of their legislators.

Angelic voices echoed throughout the domed common area of the capitol building as the Oklahoma Baptist Children’s Chorus performed before the Rose Day Rally commencement.

Rick Stansberry, priest of Christ the King Catholic Church offered an opening prayer as State Senator Julie Daniels emceed the event, “I appreciate so much that you journey here this year, taking the time to come to the capitol where in the noise of construction, the swirl of debate and discussion of so many important issues—ladies and gentlemen if we get this one wrong nothing else really matters,” Daniels said. 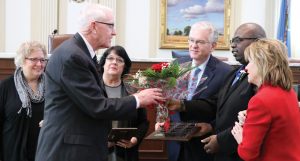 Inside the House of Representatives, from wall-to-wall, women, men and children found seats to behold the celebration of life as Oklahoma Senators and House members in agreement with the pro-life moment were recognized for their legislative efforts for the unborn.

Rep. John Enns shared his testimony that celebrates pro-life from conception to adoption. Enns and his wife adopted a child 12 years ago, after his work with colleagues to establish adult stem cell research centers and cord blood banks. Enns then paused to gain composer, and with joy in his eyes and an emotional exclamation, he said, “If the wrong person would have gotten ahold of the birth mother, I wouldn’t have my little girl. Doing what is right is never wrong.”

Lieutenant Governor Todd Lamb recalled his time serving in the state senate, when he would battle against men and women who had for many years refused to hear pro-life legislation. That is when Lamb said, “I remember praying with Anthony Jordan and Tony Lauinger, just trying to get a bill heard, and that is when the King of Kings and Lord of Lords intervened for life.”

Lamb then presented a citation to his “brother in Christ, stalwart and leader for the Kingdom and the unborn,” Anthony Jordan, “or as we Baptists call him, ‘Dr. J’,” a true pro-life champion. Lamb cited the work Jordan has accomplished for the unborn in his more than 20 years as executive director-treasurer of the Baptist General Convention of Oklahoma (BGCO). “Dr. J helped establish crisis pregnancy ministry in Oklahoma in 1986 that have seen approximately 10,000 unborn babies saved throughout that time. He has helped Rose Day flourish into the largest annual pro-life gathering in the state of Oklahoma. He and his wife, Polla, have demonstrated their pro-life convictions by becoming adoptive parents and supporting foster care,” Lamb exclaimed. “He doesn’t preach it he lives it.”

Jordan also was recognized as the Rose Day Pro-Life Champion with an award presented by Robin Jones and Lauinger, both long-time Rose Day Committee members.

“It is a sin to be silent when it is your duty to protest. 150 years ago Abraham Lincoln spoke those words,” said Lauinger, “No one has ever taken them to heart more than Anthony Jordan.”

Lauinger continued saying “This countercultural man is perfectly described by the words once spoken by Andrew Jackson, ‘One man with courage makes a majority,’ That man is Anthony Jordan.”

The Center For Family Love presented a beautiful bouquet of bright, red roses to Polla as Jordan met his warm reception with these words, “It’s been a long battle, but this battle is not done. I told my board yesterday at my last board meeting, when they get ready to close the lid on my casket, I intend to be saying ‘Save the babies.’”

Garis Diffee, in a lyrical, spoken-word testimony, shared how he and his now wife didn’t expect to become pregnant before they were married. Diffee went on to say,  “but when you were created, it was not a suggestion. We were all created with purpose and passion, crafted to perfection in our mother’s womb, how intricate the details are in our faces?”

King took to the Senate podium in a way that most before her have not.

“Put one hand on your heart and raise one hand to heaven,” said King. “We’re going to do this to the One who really matters to me, if you would join me in the last few words of ‘How Great Thou Art.’” 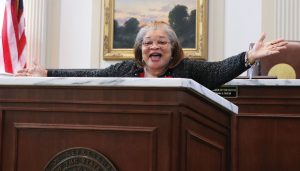 Alveda King began and concluded her time at the Rose Day rally in song, first singing, ‘How Great Thou Art’ concluding with, ‘This Little Light of Mine’.

King is the niece of civil rights activist and preacher, Martin Luther King, Jr. She is also a voice for the “Silent no more,” campaign in which she uses her testimony of two abortions to tell others of God’s forgiveness and healing. King grew up in the middle of the Civil Rights movement, and now she sees the pro-life movement as a vital continuation to fight for human rights for all humans.

King is the founder of Alveda King Ministries, has served on a number of boards including Heartbeat International, Georgia Right to Life, the MLK center, Bible curriculum for public schools and abortion recovery international, member of the national black pro-life coalition, and is a senior fellow of the Howard center for family religion and society.

The testimony of King cannot be told without the mention of the pro-life movement, due to the fact that her mother nearly had a procedure called a “mysterious female ailment” procedure, because abortion was illegal at the time. This procedure was to be done by the Birth Control League, who is known today as Planned Parenthood.

However, King’s mother went to her pastor, Martin Luther King, Sr., and he said the words that would one day bring fame and recognition to his son.

He said, “You can’t do that, that’s an abortion, this baby is not a lump of flesh, she is my granddaughter. I saw her in a dream three years ago. She has bright skin and bright red hair and she’s going to bless many people.” 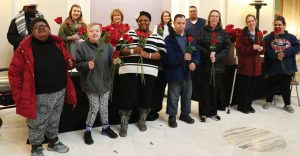 Members of the Center For Family Love distributed roses on the fourth floor of the Capitol building.
(Photos: Emily Howsden)

King then went on to describe the painful years in her life when she had two abortions performed, one legal and one illegal. “We were fighting so hard for women’s rights, we forget about the rights of the baby,” King said, quoting her uncle who said, “Injustice anywhere is a threat to justice everywhere.”

At one point in the mid 70s, King had a third unplanned pregnancy with a man and decided she would abort this child as well, until two men in her life stepped in and spoke truth to the situation.

First, the father of the child told King, “There are 46 chromosomes in that baby, 23 from you and 23 from me, I want mine back alive.” Then, King told her grandfather, the man who spoke out against her abortion years ago, that she would have an abortion. He said, “That’s not a lump of flesh, that’s my great-grandchild,” and because of those two men, King kept her child, and she is now a mother of six children.

“I’ve been reconciled to the two that I aborted and one that I lost. I repented all my sins in 1983 and became a born-again Christian, and since then God has been good to me. And I said one thing I can do is tell the truth and shame the devil,” said King.

‘This Little Light of Mine,’ parting with the words, “It’s a big light when we do it together!”

Governor Mary Fallin concluded the 27th Annual Rose Day Rally with her own story of choosing life amidst a busy campaign schedule 27 years ago as her political career began. Governor Fallin made a proclamation that Feb. 7, 2017 as “Pregnancy Resource Ministry Celebration Day” in the state of Oklahoma, celebrating the more the lives impacted and saved by pregnancy help centers.

Lisa Billy, Tribal Legislator for the Chickasaw Nation concluded Rose Day with a prayer in her native tongue.