Working on our ‘Serve’ 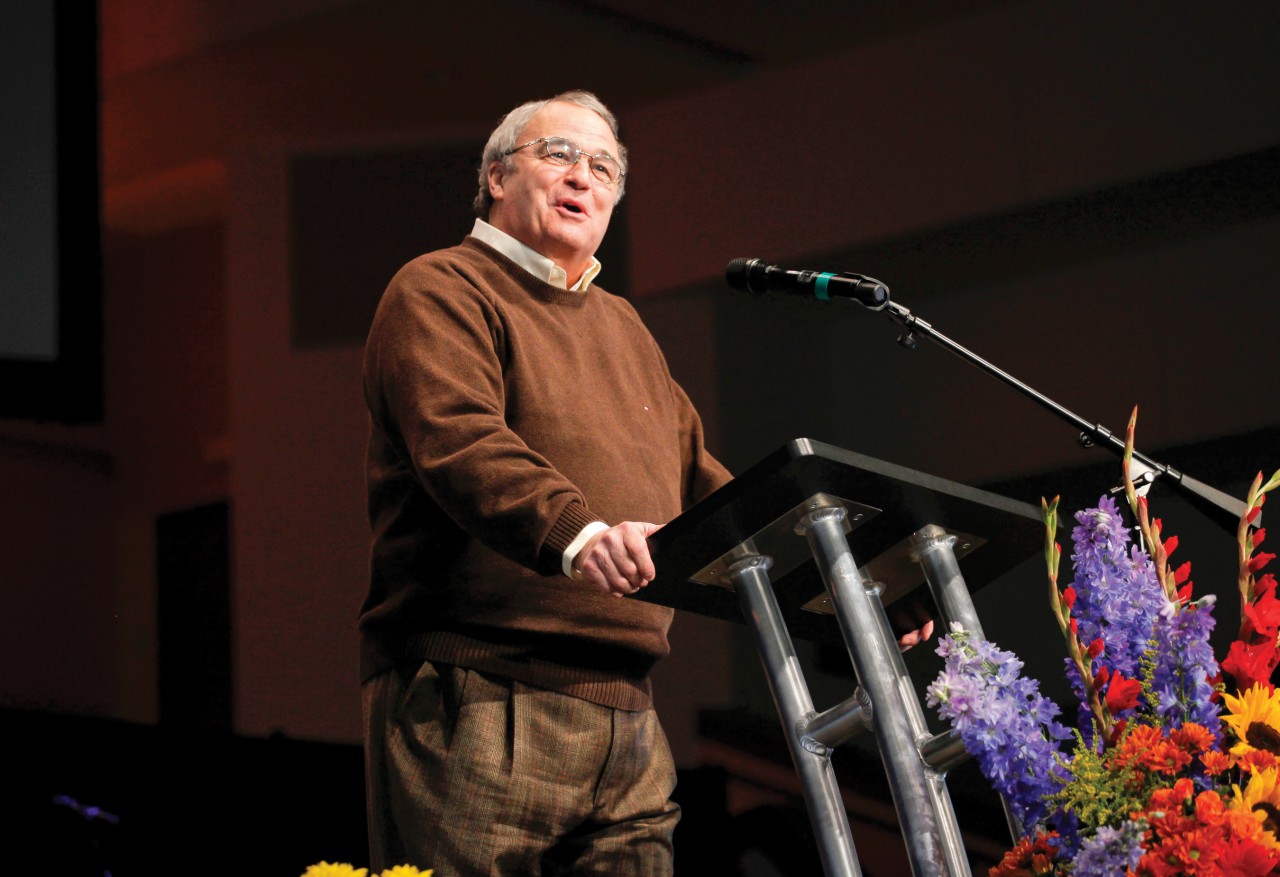 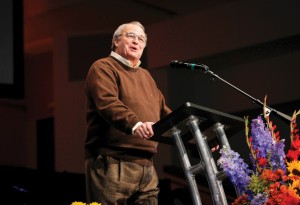 BROKEN ARROW—A sea of yellow shirts greeted those attending the opening session of the 107th Annual Meeting of the Baptist General Convention of Oklahoma (BGCO) Nov. 11 at Broken Arrow, First as the 40th anniversary of Oklahoma Baptist Disaster Relief was celebrated.

The celebration was marked with hundreds of Disaster Relief  volunteers dressed in their trademark yellow shirts, vests and jackets on hand, with a portion of the BGCO’s DR fleet of trucks and vehicles on display in the parking lot for the community to tour and see.

“The annual meeting is always a great opportunity for Oklahoma Baptists to come together and celebrate God’s blessings and His vision for the year ahead,” said Anthony L. Jordan, BGCO executive director-treasurer. “This year is especially important as we celebrate 40 years of serving Oklahoma and the nation through our disaster relief efforts.”

Since it was founded in 1973, the Oklahoma Baptists’ Disaster Relief operation has trained and mobilized more than 5,200 volunteers who have served in nearly every major disaster recovery effort, including a response to 9/11, Hurricane Katrina and most recently the Moore tornadoes and Colorado floods. 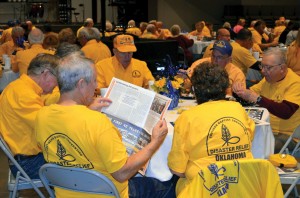 “I, personally, was helped by Oklahoma Baptists, and this 40-year anniversary is a wonderful milestone,” said Luter.

Also Monday evening, Ron Fannin, BGCO senior associate executive director, was recognized and honored with a reception. Fannin will retire next year. The theme of the annual meeting was “Serve,” based on Matt. 23:11, “The greatest among you will be your servant.”

Jordan, in his annual address, used Jesus’ parable of the Good Samaritan in Luke 10 to offer a “spiritual antibody” for many state churches who have “emptiness of soul” and have plateaued or declined.

Honing in on just two points, Jordan pointed out that to serve others, believers must “love God with a whole heart. And to do that, I have to first understand how much God loves me.

“My prayer for Oklahoma Baptists is exactly what Paul prayed . . . It is that God would pull the scales back from my own eyes and allow me to understand the depth of Your unconditional love, demonstrated to me not when I was wanting it . . . . but You came to me when I was unloving, You came to me when I was rebellious and when I was a sinner and You loved me with a whole love that overflows like a mighty rushing river, and I was washed away by Your love . . . help me comprehend the depth, the height, the width of your amazing love.”

And, Jordan said second, simply, to “love everybody.”

He said we have to take the vertical love from God and shift it to the horizontal.

“There is no limit to who we are to love,” he stressed, and while, sometimes, people may “suck the love out of us,” God will replenish it in us. 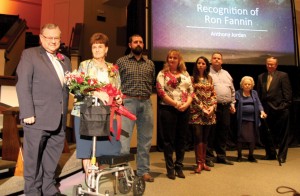 Ron Fannin is pictured with his wife, Jamie, and other family members. Fannin was honored for his service during the Monday evening’s session.

“We can’t love God without loving others,” Jordan continued. Loving God always finds its way to loving others, and loving others means I have to love those up close and those far away. Far away, I do not mean those who live on the other side of the world. I’m talking about those who don’t look like us, who don’t act like us, who  don’t talk like us,who are radically different than us.”

During the president’s address, Garland talked about the greatest title a Christian could have is “Servant.” He said in his opening remarks, “Jesus our master said these words to us, ‘Don’t be like those Pharisees. They do everything they do to be observed by men.’”

Speaking from the passage in Matt. 23:8-12, Garland gave historic descriptions of slavery, and the humbling process a slave would have to go through, and then connected that to what Jesus Christ came to Earth to do for His followers. He reminded those in attendance of the words the Lord will say in the last days of those who faithfully do the work of the Father, “Well done, thou good and faithful servant.”

Larry Nigh, pastor of Ponca City, Northwest, concluded the Annual Meeting with the annual sermon. Nigh spoke on Acts 16 and applied the Annual Meeting theme of “Serve” by challenging messengers to go where the people are, target the hearts of all people and focus on making new converts. He said churches should overcome the mentality that people will come to them. Instead, Nigh said, figure out how to go and serve people in the communities where churches are located.

Addressing a common statement of “thinking outside the box,” as far as getting church members involved in reaching communities, Nigh said, “Some people don’t know we ‘have a box’ let alone can’t think outside of it.”

“Kingdom growth is making new converts, not taking members from other churches,” Nigh said. He emphasized the purpose of all church work should be based on a two-part question: “How can I serve you, and how can I tell you about Jesus Christ?”