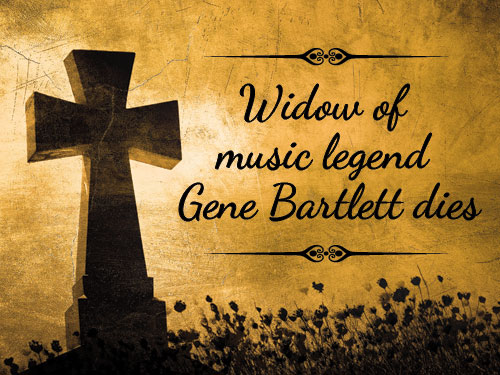 Emma Jeanne Bartlett, widow of Gene Bartlett, died July 24 in Oklahoma City at the age of 91. She had been in failing health the last few years. Funeral services were July 27 at Oklahoma City, Mayfair.

Gene Bartlett served as director of the church music department for the Baptist General Convention of Oklahoma and music director at Falls Creek from 1954-80. He was known affectionately as “Uncle Gene” to thousands of Falls Creek campers, and was the composer of numerous Falls Creek theme songs. He died July 10, 1988 of Parkinson’s Disease.

The former Emma Jeanne Stephens, a native of Desha, Ark., was married to Bartlett in 1940. She served with her husband when he was music minister at First Church, North Little Rock, Ark.; Tulsa, Springdale; Muskogee, Central and Oklahoma City, Trinity, before taking the post with the state convention.

Emma Jeanne shared in many of her husband’s innovations in the 1950s and 60s, including the birth of the Singing Churchmen of Oklahoma and workshops and choir festivals for youth.

“From the vision born in the heart of Gene Bartlett for the Singing Churchmen through the workshops and choir festivals for the youth, the over-riding desire has been to lead in true worship and praise,” Bartlett told the Baptist Messenger in a 1996 interview. “The church music department has given young ministers of music a place to grow as musicians, to feel God’s presence and the indwelling of the Holy Spirit as they share with all of Oklahoma in song, in testimony and in love. As long as Gene was able to attend the concerts, he was thrilled to hear the beautiful sounds of song, and when he could no longer attend, we listened with great joy to the recordings.”

Emma Jeanne was the author of a book about her husband, Grace So Amazing, written in 1989. Autograph sessions were held for the book each week that year at Falls Creek as part of the dedication services for the Bartlett Bell Tower and Carillon, which still stands next to the tabernacle.

Emma Jeanne also accepted a medallion for her late father-in-law, E.M. Bartlett, author of “Victory in Jesus,“ when he was inducted into the Southern Gospel Music Hall of Fame in 2000.

Emma Jeanne is survived by a daughter, Fran Myers, Oklahoma City, and a son, Reggie, Holdenville, five grandchildren and eight great-grandchildren. She was preceded in death by her husband and a son, Larry.